On December 2, the US Commerce Department released its preliminary findings on four Chinese solar companies that are charged with circumventing US tariffs by setting up product assembly sites in Southeast Asia. The companies targeted by the investigation are BYD (Cambodia), Canadian Solar (Thailand), Trina Solar (Thailand), and Vina (a Vietnamese subsidiary of LONGi). The US Commerce Department’s initial ruling is that the four Chinese companies have been evading the anti-dumping and countervailing duties on PV modules (a.k.a., solar panels) by shipping products from their foreign assembly sites. However, TrendForce believes, regardless of the outcome of this probe, the tariff exemption that the US government has recently granted for PV module imports from Southeast Asia will remain in force. The exemption applies to modules that are to be imported before June 6, 2024 and installed at project sites before December 2024. Therefore, the initial ruling has no tangible impact during the interim period.

TrendForce believes another issue that should warrant more attention than the anti-circumvention probe is the US government’s import ban against goods and raw materials from China’s Xinjiang Uygur Autonomous Region. How the US government determines which components and materials that flow from China to assembly sites in Southeast Asia are from Xinjiang or elsewhere is going be a major factor affecting Chinese solar companies’ shipments. The origins of components and materials used in PV products are not ascertained through a direct identification process. Instead, regulatory agencies often have to rely on product manufacturers and importers to provide supply chain information and sourcing certification. Also, the subjective view of the US Customs and Border Protection will play a deciding role in blocking imports from Chinese companies. For instance, JinkoSolar’s PV modules have been released into the US because they are made with polysilicon from German supplier Wacker Chemie. This example indicates that the US regulatory authorities do allow some flexibility in their case-by-case reviews of PV module imports from Southeast Asia.

PV Installation Demand in the US Is Expected to Rise Rapidly in Near Future, and Solar Imports Will Still Mainly Come from Southeast Asia in Mean Time

TrendForce’s data reveal that PV installations in the US from January to August 2022 totaled around 14.96GW, showing a YoY decline of 16%. With the recently granted tariff exemption, PV module shipments from Southeast Asia to the US will steadily return to their normal pace. Looking ahead, PV installation demand is projected to climb up sharply in the US over the next two years. Drivers of the demand momentum include numerous deferred projects, rising energy prices, and government policies that encourage the adoption of renewables. TrendForce currently forecasts that the installation demand of the entire US solar market will total around 35~40GW for 2023.

Regarding the domestic manufacturing of PV products, the US lacks a complete industry chain and is at a relative disadvantage in PV module production. Hence, local project developers are more dependent on foreign imports. If the anti-circumvention probe continues and leads to actions that further restrict imports, then costs will rise for PV installations across the US. Also, since the US is already experiencing relatively high labor and energy costs, there is a low chance of the country’s own solar companies being able to cut their manufacturing costs in the near future. Additionally, the next US presidential election will take place in 2024; and due to the political climate in that country, there are uncertainties about whether the current Biden administration or the next administration under a new president will stay committed to the existing subsidies and policies for promoting renewables. Given these factors, the US will remain dependent on imported PV modules to meet its rapidly rising installation demand as long as its domestic solar companies on the whole have yet to become competitive in terms of production capacity and cost. In sum, TrendForce believes the US government will continue to be “open-minded” about PV products imported from factories in China and other countries at least during the next two to three years. 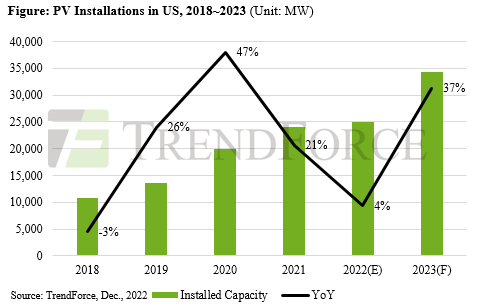