In the absence of TTI’s traditional Executive Briefing held in Las Vegas, Nevada during the annual Electronics Distribution Show and Conference, TTI opted to produce a special live broadcast to recognize and honor the 2019 Supplier Excellence Award recipients. The live presentation enabled even more of TTI and our partner associates to take part in the ceremony. 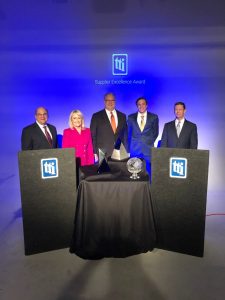 The following eight suppliers were recognized for their top performances in 2019. Bourns, KEMET, KOA, Nichicon, TDK and Yageo received Platinum award status which is the highest award level given. The Diamond Award is given for the highest overall point achievement and was presented to KOA Speer Electronics for the tenth year in a row, acknowledging their distinguished performance in 2019.

The Best Quality Award for the supplier scoring highest in each of the quality categories resulted in a tie this year and was presented to both KOA and Yageo. The Gold award was presented to Vishay and Molex was recognized at the Bronze award level. Now in its ninth year, the Global Operations Excellence Award recognized the supplier who earned the award in all three TTI regions – Americas, EMEA, and Asia, scoring the highest total points globally. For the fifth time, the Global Operations Excellence award was presented to Bourns, Inc.

Melanie Pizzey, Vice President Global Business Operations, shared these comments about the virtual ceremony, “When we learned that EDS was cancelled, we were disappointed to not be able to honor our top performing suppliers with the Supplier Excellence Award ceremony at our annual executive briefing. We quickly immersed ourselves in learning how to conduct virtual meetings and came up with the idea to host a virtual live awards ceremony for each of our suppliers. This is a win/win for both the suppliers and for TTI because it allows more employees to participate in the celebration as we recorded the events and can share the experience as well as give thanks to all of the people who directly played a vital part in ensuring our success in 2019.”

Alpha to Present on Flexible Printed and Hybrid Electronics at 2018FLEX