One of global trade’s most pivotal factors has become the Chinese New Year, which kicked off this year on February 5.

Also known as the Spring Festival and Lunar New Year, it’s a 15-day carnival that every year brakes commerce in the world’s top manufacturing and exporting economy.

Factories close. Ports, roads and train lines slow down or grind to a halt. Migrant workers visit their families. Many quit or change jobs. The impact ripples on ports, shipping lines, trade, and payments all over the world.

Over the past 10 years, Chinese imports have fallen by an average of 20% in February compared to other months, according to a Trade Numerologist analysis of Chinese customs data from the IHS Markit’s Global Trade Atlas. The festival typically starts anywhere between January 21st and February 20th, so the main impact on imports is in February. 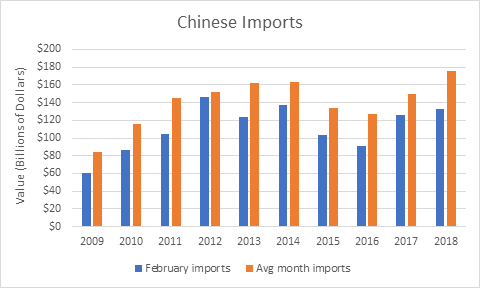 Evidence suggests that raw materials, which are usually delivered on a regular contract and don’t depend much on skilled workforces to process, suffer less from the New Year effect than manufactured goods.

For example, China imported $6.2 billion of iron ore in February 2018, roughly the same as the average amount for the rest of the year.

Not only are factories buying fewer inputs during this time, but it becomes harder to ship anything anywhere in the country, as families typically hold reunions. That means tens, if not hundreds of millions of people traveling back to their hometowns, grabbing shipping and logistics slots that might be used to haul commercial goods from A to B.

Authorities estimate that the Chinese New Year will generate around 400 million trips, including over five million abroad. The choking of transit points is especially severe in Beijing and other major cities during the first week of celebrations. 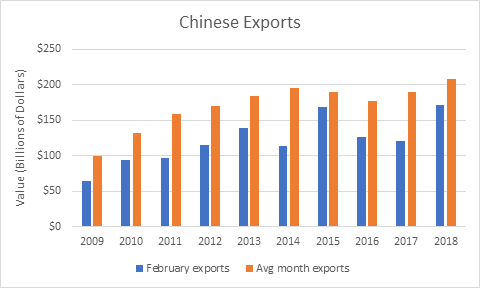 China’s industrial goods exports tend to suffer less than exports of apparel and shoes, and they are also lower in March, as the impact winds its way through the system.

For example, in 2018, China exported $5.7 billion worth of autos and auto parts in February and $5.2 billion in March, before rebounding to $6.4 billion in April, compared to an average of $6.3 billion per month for the whole year.

In 2018, China exports $5.2 billion of apparel in February and $3.2 billion in March, before rebounding to $4.9 billion in April, compared to an average of $6.1 billion per month for the full year.

Although shipping trade slows down, there is a silver lining to the individual travel: Chinese tourists are going to the US and Europe to shop during the Chinese New Year, good news for luxury goods companies in London, New York and Geneva.

It’s been 30 years since China started its path toward becoming the world’s dominant exporter and attractive new market. Now, understanding the rhythms of commerce during the Chinese New Year has now become an important part of doing business with the Middle Kingdom.

But the Chinese New Year is just one example of how, despite the sweeping automation of so much of global trade, it’s important for logistics, shipping and trading companies to understand the impact of cultural traditions and make appropriate adjustments. There are other examples: wine and toy trade takes off before Christmas and New Year, chocolate shipments increase ahead of Easter, and sunscreen products get shipped before the summer holidays.

On the last day of the festival, the Lantern Festival, glowing lamps are hung and towns hold parades at night, typically featuring dancers and a colorful dragon. The festival is celebrated in mainland China, but also in Hong Kong and Taiwan. And all over the world, Chinese emigrants follow suit. This year, as China transitions to the year of the pig from the year of the dog, there is one group of people working hard: trade officials.

US Trade Representative Robert Lighthizer has set March 2 as a deadline for China to resolve major issues, principally shrinking the trade gap between the two countries and reducing Chinese exports of steel and aluminum, or face higher tariffs. No date has been set yet for a summit.