SEHO Systems GmbH, a worldwide leading manufacturer of complete solutions for soldering processes and automated production lines, is one of the most innovative companies in the industry. One of these innovations is SmartSplit, an intelligent software that cuts the cycle time in half for selective soldering in mixed production. 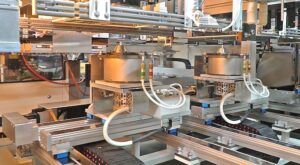 With the appropriate sensors in the soldering system, SmartSplit controls and coordinates the process flow for different assemblies in mixed production. With this newly developed software component, an efficient system for batch production becomes an innovative selective soldering system for high-mix-high-volume production, without conversion and with minimal costs.

SmartSplit automatically distributes the various process tasks such as flux application, the soldering process with up to six soldering units and brushing process to the process stations available in the individual system, and thus enables cycle times to be cut in half from a quantity of one to large-scale production. The total processing time for the individual assembly is automatically minimized by the software. At the same time, the process stations do not restrict each other, so that the entire work area can be used.

Another advantage of SmartSplit is the simple programming: Only the entire soldering task has to be programmed for an assembly and the software automatically distributes it to the existing process stations.

The new software component SmartSplit is of particular advantage for electronics manufacturers that process a large range of assemblies or produce a large number of product variants. Regardless of whether small or large quantities are produced, SmartSplit automatically ensures the most efficient use of the selective soldering system.

ZESTRON will be Exhibiting at SMTA Empire Expo

Incap Corporation invests in a third factory in India