According to the 1Q20 revenue ranking of global top 10 IC design companies compiled from TrendForce’s latest data, Qualcomm was able to stop the trend of continuous YoY revenue declines, which lasted for the six previous consecutive quarters, because of its effective 5G product strategy and the considerable growth in WFH and distance learning demand. On the other hand, Broadcom’s semiconductor business displayed negative growth for five consecutive quarters because of market competition and the China-U.S. trade war, subsequently trading places with Qualcomm on the revenue ranking list in 1Q20.

TrendForce Senior Analyst CY Yao indicates that Qualcomm was able to become part of the supply chain for Chinese brands’ flagship and high-end smartphones in 1Q20. Furthermore, its 5G RF front-end products enjoyed increased market adoption. These factors, combined with increased demand for its networking products because of the COVID-19 pandemic, led Qualcomm’s revenue to return to a state of growth in 1Q20. However, Broadcom was impacted by not only the China-U.S. trade war and the accompanying Entity List policy, but also the recently declining shipment of its major client Apple’s iPhones, which was unable to sustain the revenue of Broadcom’s semiconductor business.

The other two U.S.-based companies, NVIDIA and AMD, recorded stable revenue performances of 39.6% and 40.4% CAGR in 1Q20, respectively. Whereas NVIDIA benefitted from strong momentum in gaming graphics cards and data centers, AMD had the highest revenue CAGR on the list of top 10 IC design companies due to rising revenues from its line of 7nm CPUs, in addition to the massive demand for WFH-use notebook computers brought about by the pandemic. Marvell benefitted from increasing demand for networking and 5G infrastructure while being relatively less impacted by the China-U.S. trade war. Conversely, Xilinx underwent an 8.7% YoY revenue decline due to the continuing influence of the trade war, marking the first time since 2016 the company suffered YoY declines in two consecutive quarters.

With regards to 2Q20 performances, given the once again escalating trade tensions between China and the U.S. as well as persisting influence from the COVID-19 pandemic, Broadcom and Xilinx are likely to see YoY declines in the short term, according to TrendForce. On the other hand, pandemic-induced networking and notebook computer demand is expected to persist, meaning IC designers specializing in related applications are projected to maintain strong revenue performances in 2Q20. 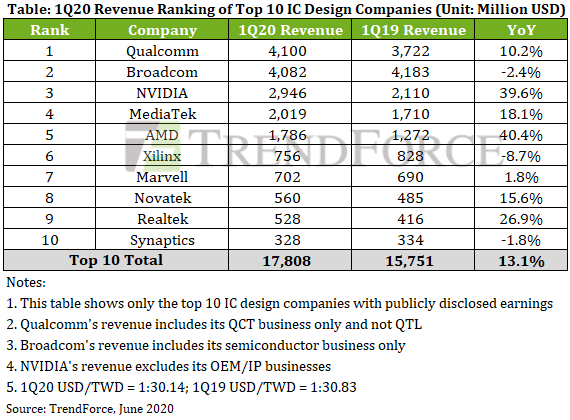 China’s Surge Into 5G Will Push the Worldwide Smartphone Market Back to Growth in 2020, According to IDC