The results of the March 2022 Electronic Component Sales Trend Survey (ECST) reveal a softening in both the assessment of March sales growth and April sales expectations. Actual overall sales sentiment for March fell by nearly 16 points from the February measure to come in at 113.6. The declining trend in expectations continues in the April outlook as the index falls another 7.1 points to 106.5. While still reflecting expectations for positive market growth these are measurements that are in the same weaker range as the index reports for September through January. It appears that the February reading was only a temporary surge in optimism. The good news is that the index is still positive – but just barely. Hopefully, the electronic component markets can overcome the headwinds they are facing and continue to exhibit resilience and relative stability in an unstable environment.

Sentiment across all major component categories moved in the same direction and by a similar magnitude in March. The Electro-Mechanical components index only drops by a point in April compared to much stronger drops in the other categories. As a result, the Electro-Mechanical index outlook for April comes in strongest at over 111. Passive components come in at the lowest of the categories in April at slightly above 102. The decline in the index was seen in every subcategory for both March and April. Following a strong jump in February, Inductors suffered the most significant slump in March followed by Connectors and Capacitors. Still, on the bright side none of the component subcategories dropped below 100 – the threshold between assessment/expectation of growth or decline. 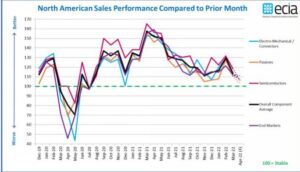 Cogiscan to Launch Geoscan at APEX