Overheating problem for battery chargers has become an increasingly common safety issue – not the least around Christmas – causing fires at home at personal risk and dire costs for private persons as well as insurance companies. Industry expert Niklas Kvist explains how a new IR sensor can be the solution to one of Christmas potential fire hazards.

Christmas and December. Our darkest, and at the same time, most enlightened time of the year. It is also now that we consume the most amount of electricity, lightning up our Christmas decorations – but also to charge our phones, tablets and laptops, which are now also, very popular Christmas presents. Hardly any surprise, the number of mobiles, laptops and tablets that need to be charged continues to increase rapidly. Only in the first quarter of 2018, approximately 384 million smartphones were sold, according to research firm Gartner. Even though the batteries are getting more and more durable, our frequent use of these gadgets makes us charge them constantly, and even more so when we are asleep.

In the wake of increasing electronic gadget sales, the overheating problem for battery chargers has become an increasingly common safety issue. The U.S. Consumer Product Safety Commission reports that deaths, injuries, and property damage from consumer product incidents cost the U.S. more than $1 trillion annually. Overheating of chargers certainly belongs to that category, and can be caused by substandard chargers, faulty batteries, or by misuse of the chargers. In worst-case scenarios the devices melt or catch fire. Unsurprisingly, this kind of electrical fires have increased in recent years. When charging a smartphone or a tablet you provide a big boost of power into a small size battery, this in turn increases the risk of overheating since a considerable amount of energy is transferred into a smaller space (the battery).

Therefore, many have found it imperative to come up with solutions that can tackle this big safety issue in our homes and offices. A new kind of IR sensor – also referred to IR sensor 2.0 – has been found to have the properties required to cope with the overheating problems that cause so much damage. This new sensor is based on nanotechnology which provides it with several advantages, one of them allowing it to be easily integrated into chargers and function as an overheating alarm for chargers in mobiles, laptops and tablets. So how does this overheating sensor work? And what makes it so special?

The overheating alarm consists of a small device that attaches to a charger and monitors the temperature using the sensor, a so-called thermal radiation sensor. This new generation of thermopiles (electronic devices that convert thermal energy into electrical energy) generates a direct, proportional voltage response when subjected to infrared radiation from the charger it is attached to. In more technical terms, the sensor registers wavelengths from 250nm – 22,5μm that is visual light reaching up to the mid-infrared region. The unique geometrical configuration where the thermocouples are vertically arranged enables the sensor to measure heat flux as well as temperature.

Based on nanotechnology – only one sixth of a millimetre thick 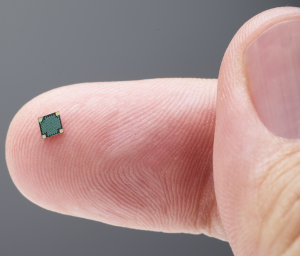 The sensor itself is based on nanotechnology, which allows many advantages. It only measures 0.17 millimetres in thickness and is almost entirely made of plastic. It is a very robust piece of plastic that can be used as is, without any metal casing – a protective housing – that is being used by many other producers. To summarize, the IR sensor 2.0 is extremely thin, bendable and can be manufactured in a cost efficient way in substantial volumes. This makes it suitable for all kinds of applications that require small sensors where temperature or heat flow is to be measured.

But protecting chargers from overheating is not the only area for IR sensor 2.0. Due to the sensor’s unique properties it opens up for entirely new types of applications using infrared sensors, such as buildings, smart homes, connected cities, environment and energy technology, consumer electronics, cars, clothing, MedTech and security solutions. Preventing overheating in chargers – saving lives and money – is just the beginning for this new IR technology, represented by IR sensor 2.0.