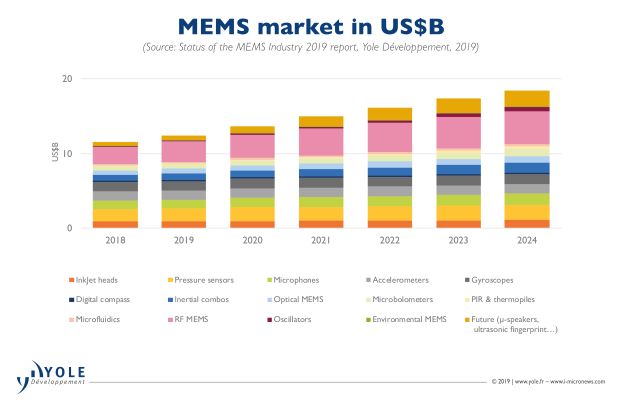 2018 was a good year for MEMS foundries offering manufacturing services. In 2019, piezoelectric technology is seen to be increasing its momentum. Edge computing and big data are other trends favoring the MEMS industry.

Performance in 2018
First, let’s go back to the past and see how was the MEMS manufacturing market performance in 2018. Eric Mounier, fellow analyst, Photonics, Sensing & Display, Yole Développement (Yole), said: “Competition was fierce for companies manufacturing the same devices. Broadcom led the race with its RF BAW filters in the consumer market. Two battlegrounds formed around inertial and pressure MEMS for consumer and automotive applications: NXP and Bosch competing in the automotive segment, while Bosch and STMicroelectronics clashing in the consumer market.

MEMS industry in 2019
Now, let’s see how 2019 has been panning out, so far. According to Mounier, in 2019, piezoelectric technology has been increasing its momentum. A revolution in MEMS technology is underway: piezoelectric MEMS.

More and more gyroscopes, BAW filters, and inkjet heads are being created with piezoelectric MEMS. Now, microphones, microspeakers, autofocus, and pMUT for fingerprint sensors, ultrasound, and gesture recognition, are underway too.

Public/mainstream interest in this technology is also reflected by the increasing amount of funding in piezo tech. Another trend is edge computing, with sensors and MEMS driving a new age of technology. Big data is an industry born of recent advancements in AI and ML, built upon and fueled by a wealth of new data from ever-expanding sensor applications.

Sensors are digitizing the human experience, and as the real and virtual worlds move closer together, it will be sensors that bind them, enabling new experiences for users everywhere. Running AI at the edge, coupled with sensor fusion, will open new applications for MEMS in audio, motion, olfactometry, and imaging.

Difference in revenue
Now, there seems to be some difference in the revenue numbers for 2018. For example, after ST, others drop off, from 516, down to 66? Are the others not doing adequate development, or bagging orders?

Mounier said that the revenues of the top 30 players seem to have a big dynamic range, from $1.5B for the first (Broadcom) down to $66M for the last (Sony). The reasons stem from their various business models, in conjunction with the capacity of each MEMS device penetration in various applications:

Then, why did the revenues of inkjet head players like Canon and HP rose, while that of Epson and the others shrank?

He clarified: “On one side, HP and Canon traditionally compete in the consumer and office printhead market, and typically, contest for the increased sales. HP recorded slightly positive year-over-year growth due to the increased demand for consumer printers and also because of strong adherence to its cartridge loyalty program. This recovery in the disposable printhead market is a mix of shipment increase from last year and ASP increase. Canon’s revenues decreased due to its loss of some market share to HP in the same consumer and office printer market.

“Furthermore, Epson PrecisionCore chip factory will start production in 2019, which we think will strengthen its presence among the MEMS printhead manufacturers.”

Microbolometers bloom! And, shrink?
In microbolometers, how are FLIR and ULIS continuing to grow year after year? Again, aren’t the others serving various applications?

Dimitrios Damianos, Technology & Market Analyst, MEMS Sensors Photonics Imaging, Yole Développement (Yole), said: “FLIR and Ulis (now renamed Lynred) continue to increase their revenues in the microbolometer market due to higher adoption and popularity of uncooled technologies vs. legacy cooled tech, which is pricier and maintenance heavier, due to its cryo-cooler lifetime.

“Microbolometer-based cameras have a lower SWAP-C, which makes them ideal for defense applications (i.e., heat-seeking missiles, ISR, rifle scopes, etc.), as well as industrial thermography and security/surveillance markets. Further, new applications such as professional drones, PVS (personal vision systems) for hunters and firefighting drive the growth of these two companies.”

DLPs face challenges
Why are TI’s DLP still constrained to consumer projection applications? Why is it waiting for possible uses in LIDAR, heads-up displays (HUD) and smart headlights?

He said that the DLP pico-projector market is dominated by TI with its optical MEMS technology. However, this market has saturated. If TI wants to increase its revenues in the future, it should start focusing on other applications (both consumer and automotive) where optical MEMS technology could leverage its low cost, i.e.:

TI’s DLP could be used for many other applications, but the technology faces some challenges. For pico projection application, although DLP has adequate form factor and price, there has been not a big market demand to integrate DLP in smart phones due to a low interest from the end-users.

Micro mirrors could also be used for optical switching in fiber optics telco. However, we need high-speed switching time, and large arrays are not what the industry is asking for today. Maybe, LIDARs could be the next Holy Grail.

Here again, MEMS mirrors is facing other approaches such as optical phase arrays, which have the advantage of having no mobile parts. Yole believes that MEMS mirrors could be used in the short term by the car industry for LIDARs.

Top 30 revenues in 2019
Finally, how does Yole estimate the overall top 30 revenues for 2019? What percent of the total MEMS market will they comprise?

“We believe that this percentage won’t change significantly in the coming year, with top players totaling ~$11B. However, the big players will try to eat up each other’s market share (in the same markets that they compete). We already saw competition getting tougher and tougher between the different players, since the cake is not as big.

“On the M&A side, MEMS-related acquisitions declined during the last year, reflecting the weaker, general semiconductor-related M&As and a consolidation of the business. Furthermore, there were no significant new entrants, and existing players struggled to compete against each other. IDMs will continue producing in high volumes, while margins will keep dropping due to higher competition. For players, differentiation of products is paramount if they want to gain market share.” 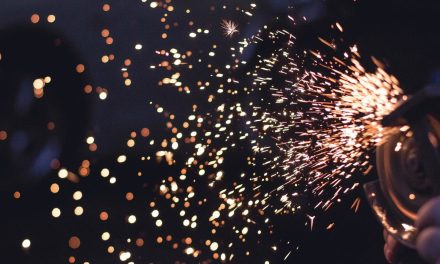