INDIA – India’s networking market which includes Ethernet Switch, Routers, and WLAN segments witnessed a 2.9% year-over-year (YoY) growth in terms of vendor revenues during 2Q22 (Apr-Jun), according to International Data Corporation (IDC). Vendors continue to battle chip shortages which is extending the lead times. Though the delays are starting to get rationalized in the wireless segment, the shortages in the switching segment continue to worsen, specifically in the access and distribution layer. This has led to growth in the DC switching segment compared to the non-DC switching during 2Q22. The prices of network equipment have significantly increased over the last few quarters owing to the high input costs driven by semiconductor demand, logistics, fluctuating currency, etc. Despite these challenges, the demand for networking equipment has not weakened and vendors have at least two-quarters of backlogs to clear in the coming months. IDC expects the second half of the year to have significantly higher business compared to the first half.

Switching business in India had a 6.4% YoY growth by vendor revenue during 2Q22. Non-DC switching declined by 2.9% YoY owing to the shortage of equipment in the access and distribution layer. DC switching market grew at a YoY growth rate of 19.8% owing to the pent-up demand that has started to come in post-pandemic. Key industries that contributed to the switching business include services, manufacturing, finance, and telecom.

India’s router market declined 13.4% YoY by vendor revenues during 2Q22. Having mentioned that there was a sequential increase of 13.7% quarter-over-quarter (QoQ). Service providers contributed to 62.3% of router revenues and were majorly responsible for the category to decline. However, we expect to witness telecommunications vendors incurring CAPEX ahead of the 5G rollouts in India which in turn would grow SP router deployments in India during the coming quarters. Enterprise router business grew by 16.3% YoY with investments aimed at regular refreshes and SD-WAN deployments. Apart from telecommunications, the key verticals for routing include services, finance, and government.

The WLAN segment witnessed a strong growth of 19.2% YoY by vendor revenue owing to the growth exhibited by the enterprise wireless segment. While segments like services were spending even during the pandemic, demand from verticals like education, retail, and hospitality, which remained muted during the pandemic, have started to spend on wireless infrastructure and had significant business during 2Q22. There has also been a significant uptake on cloud-managed wireless over the last four quarters. Within enterprise-class WLAN, Wi-Fi 6 (AX) continued to dominate the market with a 70% share by vendor revenue.

Despite offices opening in most parts of the country, consumer gateway routers continue to grow at a steady pace of 5.7% YoY owing to the trend of hybrid work. However, the growth was marginal (0.4%) from a QoQ perspective. With the festival season in India around the corner, IDC expects the gateway router market to have a temporary spike in demand over the next 2 quarters.

According to IDC’s Wor ldwide Quarterly Ethernet Switch Tracker, the 2Q22 Ethernet Switch market in India stood at USD 157 million (by vendor revenue) registering a strong YoY growth of 6.4%. DC switching segment contributed to the growth with a YoY growth of 19.8%. Non-DC on the other hand declined by 2.9% owing to the chip shortages that vendors are facing primarily in the low-end switching that includes PoE switches. The lead times of switches continue to suffer with vendors struggling to clear backlogs worth two-three quarters. IDC also witnessed enterprises willing to go beyond the top five vendors while procuring non-DC switches considering the existing lead times. Strong growth came from multi-gig, 25G, and 100G speeds. 200G switches are also picking up traction in India. Key business verticals for switching during 2Q22 include services, manufacturing, finance, and telecom. 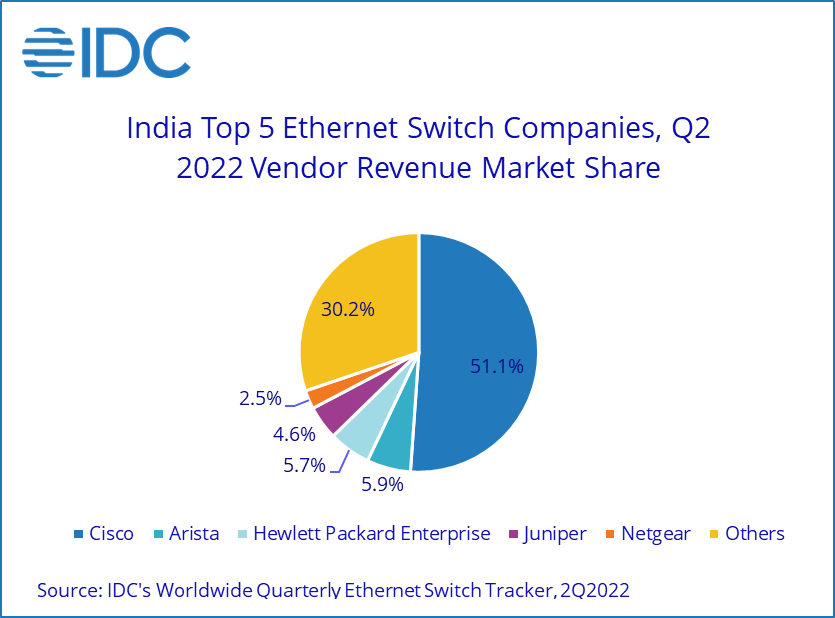 Cisco continued to lead the Ethernet Switch market with a 51.1% share during 2Q22, followed by Arista and Hewlett Packard Enterprise (HPE).

According to IDC’s Worldwide Quarterly Router Tracker, the India Router market in 2Q22 stood at USD 70.2 million (by vendor revenue) with a YoY decline of 13.4%. The decline can be mainly attributed to telecom service providers going slow on router investments. Service Provider deployments declined by YoY 25.0% during 2Q22. IDC expects this decline to be temporary and telecom vendors to commence CAPEX ahead of 5G rollouts. These investments may roll up to two years centered around capacity expansions, building edge DCs, etc. for effective delivery of 5G services in India.

Enterprise router investments grew by a YoY growth of 16.3%. These investments were focused on regular router refreshes and deployments aimed at SD-WAN implementation. Apart from telecom, key investment verticals were services, finance, and government. 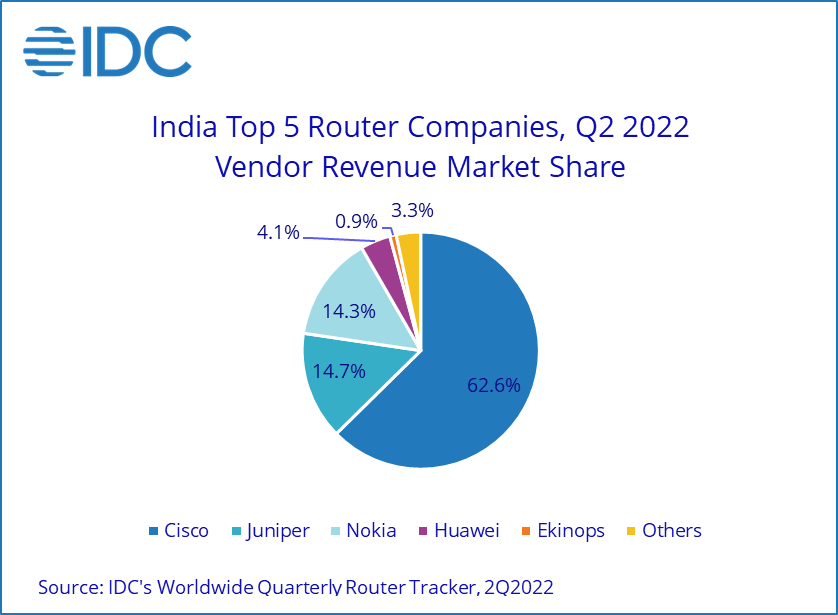 Cisco leads the router market with a 62.6% market share in 2Q22 followed by Juniper and Nokia.

According to IDC’s Worldwide Quarterly Wireless LAN Tracker, the Indian WLAN market had a strong YoY growth of 19.2% by vendor revenue during 2Q22 majorly driven by the enterprise wireless segment. The market stood at USD 59.9 million (by Vendor Revenue).

Enterprise-class WLAN grew by 29.4% by vendor revenue. The chip shortage situation is comparatively easing out in the WLAN segment compared to switching. Vendors are currently focused on clearing the backlogs as much as they could before CY 2022 to be able to efficiently cater to future demand. The trend of choosing vendors other than the top three to be able to get quicker shipments was evidently seen in the wireless segment as well. Services continued to be the top spending vertical. However, verticals such as education, retail, hospitality, etc. which was in a long slumber caused due to COVID, have started to gain significant traction. Wi-Fi 6 continued to dominate WLAN revenues with a 70% share by vendor revenues. Despite the growth of Wi-Fi 6, older generations of wireless i.e., AC Wave 2 continue to have market demand owing to the cost-effectiveness and to bridge the gap in the lack of Wi-Fi 6 access points in the market.

The consumer gateway router business grew by 5.7% YoY by vendor revenue. Despite offices opening in the country, the trend of hybrid work is largely propelling the growth of consumer gateway routers. Having mentioned that, the QoQ growth remained flat at 0.4%. While AX is starting to gain adoption in the consumer segment, the market is still dominated by Wi-Fi AC followed by N routers as ISPs continue to use these generations of routers for enabling home broadband connectivity.

Sudharsan Raghunathan, Associate Research Manager, Enterprise Networking, IDC India says, “With India looking to roll out 5G, the technology will play a pivotal role in the growth of the enterprise networking market. Though telecom vendors are expected to incur lesser CAPEX on network equipment compared to the previous generations, IDC expects that the top two telcos will incur significant expenditure on network infrastructure aimed at building edge data centers to deliver the 5G promise of faster speeds and lower latencies. As enterprises come out of the effects of COVID, the demand for network infrastructure across all verticals is looking stronger than ever with bookings piled up to serve 2-3 quarters from now. IDC expects the second half of 2022 to have a much stronger demand compared to the first with demand coming from services, telecom, finance, and manufacturing.”

The Ethernet Switch, Router, and WLAN market are expected to grow in single digits in terms of compound annual growth rate (CAGR) for 2021–2026. Increased adoption of emerging technologies such as cloud, IoT, mobility, etc. would drive incremental revenues. IDC also expects large investments for 5G rollouts in the next couple of years.

SIA: The U.S. Should be Concerned with its Declining Share of Chip Manufacturing, Not the Tiny Fraction of U.S. Chips Made in China

Solar and renewable energy trends in 2021