The start of the second quarter saw a mild downturn in global manufacturing output, as tighter COVID restrictions in China weighted on production. Rising geopolitical tensions, supplychain disruptions and escalating inflationary pressures also weighed on new order intakes, as growth of new business eased to near-stagnation. The J.P.Morgan Global Manufacturing PMI™ – a composite index produced by J.P.Morgan and S&P Global in association with ISM and IFPSM – fell to 52.2 in April, down from 52.9 in March, its lowest level since August 2020. The PMI nonetheless extended its sequence above the neutral 50.0 to 22 months.

Please note that due to later release dates, data for Greece, Indonesia, Ireland, Kazakhstan, Malaysia, Russia, Thailand, Turkey, the UK and Vietnam were not available for inclusion in the April numbers.

The April PMI surveys signalled a downturn in worldwide manufacturing production for the first time since June 2020. The Global Manufacturing Output Index dropped to 48.5 in April. The decline mainly reflected a steep contraction in mainland China, where escalating COVID restrictions were a major factor underlying the sharpest drop in production volumes for 26 months (since February 2020). The Global Manufacturing Output Index calculated excluding China posted 53.2, up from 53.1 in March, over 4pts higher than the index including China.

Output growth improved to a nine-month high in the US. The slowdown in the euro area continued, with production rising only marginally and to the weakest extent during the current 22-month upturn. Japan and Brazil saw modest expansions, with rates of growth little-changed from March. Output fell across the consumer, intermediate and investment goods industries, the first time all three have registered concurrent contractions since June 2020. The outlook also deteriorated, with business optimism dipping to a 19-month low.

Although the level of incoming new business rose for the twenty-second successive month in April, the rate of expansion was only marginal and the weakest during that sequence. New order growth slowed in the consumer and investment goods industries, while intermediate goods producers saw a decline for the first time since mid-2020.

Alongside subdued conditions in a number of domestic markets, declining inflows of new export business weighed on order books during April. International trade decreased for the second straight month, with contractions seen in China, Germany, Japan and France (among others). North America fared better, with new export order intakes rising in the US, Canada and Mexico. India and Australia also registered growth.

Global manufacturing employment rose for the eighteenth month running in April, albeit at the slowest pace since January. Staffing levels were raised in the US, the euro area, Japan, India and Brazil, but reduced in China. Jobs growth slowed across the consumer, intermediate and investment goods industries. Inflationary pressures remained elevated in the global manufacturing sector in April. Average purchase prices rose to one of the greatest extents during the past 11 years, leading to the joint-steepest increase in output charges since the series began in October 2009 (equalling October 2021’s record). Stretched global supply chains contributed to the price inflationary pressure, with vendor lead times again lengthening to a near-record degree. 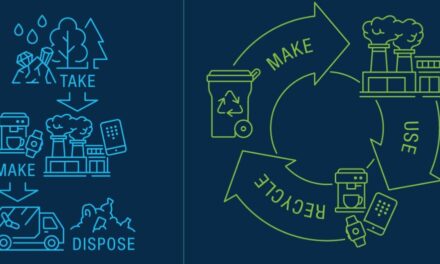 How Data May Solve the World’s Circular Economy Challenges