For International Manufacturers in Mexico, A Consistently Weakening Peso is Still a Competitive Advantage, For Now

Mexico’s currency crisis struck in 1994, and ever since then the value of the Peso against the US Dollar has been sliding consistently. There have been peaks and valleys during this nearly 25-year period – Trump’s election in late 2016 resulted in a significantly higher drop than usual, followed by a modest rally that has since stabilized, for example – but a consistent devaluation has been the norm, for the most part.

This article touches briefly on some of the important factors contributing to the weakening Peso, and examines some of the potential changes to the pending USMCA (formerly NAFTA) pact that may affect currency exchange. The full whitepaper from Entrada Group looks more closely at the competitive advantage the Peso affords international manufacturers operating in Mexico, as well as some important caveats to be mindful of, for companies producing in Mexico or for those contemplating their first Mexico facility

It’s important for manufacturers that are considering setting up Mexico operations to be aware of the fact that Peso fluctuations bring advantages as well as operational concerns and complications that no manufacturer should ignore. To consider how the value of the Peso might change in the years ahead, relative to the US Dollar, download our full whitepaper.

Mexico was able to adapt and overcome its currency crisis in the mid-1990s by implementing a free-floating exchange rate and untying its currency to the US Dollar. This is one of the key factors that has resulted in the long, steady weakening of the Peso.

The relative global strength of the US Dollar, which has long been viewed as a “safe haven” currency, has played a central role in the steady, ongoing devaluation of the Mexican Peso. At the same time, additional pressures such as inflation and Brexit have also contributed to the Peso approaching a longtime low. And that was before the 2016 US election.

Donald Trump’s victory was followed by the Peso plunging as much as 13.4% against the US Dollar on November 9. Mexico’s currency eventually rebounded to a net 9.2% loss on that day, but it was still the Peso’s worst single day since 1994. Since then, the Peso has rebounded slightly against the US Dollar, with the August 2018 announcement that NAFTA would be renegotiated (and rebranded as USMCA) resulting in an overall stabilizing effect on the currency.

As of this writing, the final details of USMCA are still being hashed out, with the pact awaiting approval by the U.S., Mexico and Canada. But those final details are unlikely to have a significant impact on the future value of the Peso against the US Dollar. Year to date, the Peso has been one of the best performing currencies against the US Dollar in 2018, having gained back over four percent so far, according to a July 2018 Bloomberg article. 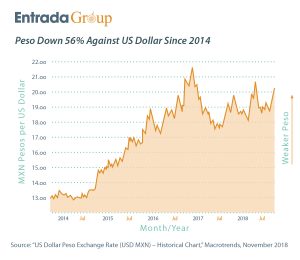 It’s important to keep in mind that while political rhetoric, fiery quotes and tweets may garner a lot of headlines and media coverage, it’s unlikely that either the Trump administration or the administration of Mexico’s new President Andres Manuel Lopez Obrador (better known as AMLO) will do much to significantly affect the Peso/US Dollar exchange rate.

Despite all of Trump’s threats to build a wall and remake NAFTA into a better deal for the US, Mexico’s Peso remains near historical lows against the US Dollar and, as such, represents a huge competitive advantage for international manufacturers in Mexico.

For AMLO’s part, since being elected in the summer of 2018, his administration has been doing and saying all the right things to calm investor anxiety about any potential policy changes. His Finance minister reassured investors that the country’s 2019 budget will remain under control and that the independence of Mexico’s central bank will be respected. If current actions are any indication, there is little concern of AMLO implementing an extreme measure such as taking the Peso out of circulation as a free-floating currency or tying its value to the US Dollar.

The persistent devaluation of the Peso has given Mexico a longstanding competitive advantage in attracting manufacturers looking to reduce production costs, particularly for those selling product to the United States. The fact that the decline has been relatively gradual—without too many wild swings in value—has further bolstered manufacturers’ confidence about the prospect of producing in Mexico.

The benefits of the Peso devaluation aren’t as wide-ranging as some manufacturers might hope, however. Canadian economist Joe Atikian says the advantage applies mostly within North America, and that the ongoing devaluation hasn’t sparked a real competitive edge against Japan and its Yen, for example. “Every time the Yen got stronger,” he explains, “Japan got stronger as an industrial economy, becoming a world power in science and automation. Mexico hasn’t become a world leader on those fronts yet.”

The Peso’s devaluation, however, has helped Mexico to better compete against China in becoming an attractive manufacturing hub. As the Mexican Peso devalued against the US Dollar, the Chinese Yuan strengthened. This resulted in a more cost-effective environment for manufacturers to produce in Mexico. Mexico’s competitive advantage predominately materialized in labor costs.

Download the full version of our whitepaper to learn:

Entrada Group guides international manufacturers in establishing and running their own cost-competitive Mexico operations. Our manufacturing support platform manages all your general and administrative services, reducing cost and risk, and generating long-term growth. Visit us: www.entradagroup.com

Kurtz-Ersa awards the Murray Percival Co ‘Rep of the Year’