According to TrendForce analysis, the latest wave of data corrections has occurred for two main reasons. First, terminal demand has slowed down. Due to factors such as the Russian-Ukrainian war, high inflation, and China’s lockdowns, the growth of major world economies has stagnated, and overall consumption has followed suit. Looking at branded manufacturers as a whole, their sales figures of whole devices in 1Q22 totaled 55.6 million units, falling 4.5% YoY. Brands faced a sales decline in 1Q22 which, in turn, has skewed the outlook for 2Q22 more conservative, causing purchase volume on the panel side to plummet in turn.

Second, panel inventory held by various brands remains high. In the past two years, strong demand for notebook terminals and a shortage of panels prompted brands to place a large number of orders to seize scant panel resources. However, facing a reversal of demand, these large panel purchases have turned into considerable inventory. It is reported that branded manufacturers’ notebook panel inventory on hand was approximately 8 to 12 weeks near the end of April. This is 2 to 4 weeks more when compared to the normal watermark of 6 to 8 weeks, forcing brands to greatly downgrade the number of orders placed in order to adjust inventory.

After the 2Q22 correction, TrendForce sees two major risks remaining in 2H22. First, the depletion of panel inventories will likely continue into 3Q22. In addition to foundry shutdowns and the impact on production capacity caused by China’s lockdowns, logistics and component delays have also reduced the production capacity of whole device assembly, impeding the smooth depletion of panel inventory. At the same time, as mentioned above, assuming that brands may not be able to completely deplete their inventories in 2Q22, the sales momentum of notebook panels in 3Q22 may subsequently be affected.

Second, the inventory level of the whole devices held at the brand-end is high. Since 2H21, shipping has remained congested and many notebook computers are still at sea or in port container distribution centers, becoming unsold whole device inventory. TrendForce indicates that the inventory of branded laptops is significantly higher than before the pandemic and the combination of this high level of whole device inventory and weak terminal demand will further prolong the correction period of notebook panel shipments.

Therefore, the momentum of notebook panel sales is unlikely to reverse in 3Q22 and a rebound in momentum in 4Q22 will depend on branded manufacturers’ depletion of on hand panel and whole device inventories. To sum up, TrendForce forecasts that notebook panel shipments in 2022 will be revised downward to 240 million units, a YoY decline of 14.9%, with further potential for downward adjustment. Market trends will depend on changes in the overall environment. 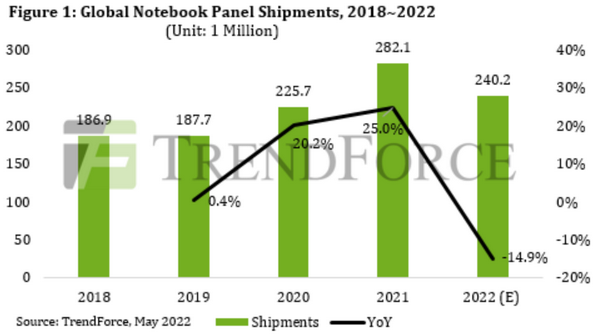 How Will Autonomous Technology Reshape the Electric Vehicle Landscape?