Katek SE – a controlling share of which is owned by family-run Holding Primepulse SE – is in the process of positioning itself as a new player in the German and European EMS market. The objective is to break into the top ten in Europe. The acquisitions of Steca GmbH (Memmingen/Germany), Katek GmbH (Grassau/Germany), and ETL GmbH (Mauerstetten/Germany) constitute the first step towards that objective, and may well have put Katek SE at the number three spot in Germany – maybe even number two.

Market forecasts are often shamelessly exaggerated or at least overestimated. That was the case for voice recognition, autonomous driving, smart home, electromobility, and the list goes on. However, that is not true for at least one market: IoT devices. These are the devices that communicate with each other and with people. In a world in which every upscale kitchen stove has a WiFi module, that means just about all devices. Some even think that, in the future, any electronic device of value, no matter what its use, will be part of the IoT. An autistic device is not of very great value because it does not share its data, cannot use information, is not connected to the cloud, and cannot be controlled via app. This is true across sectors, consumers, and industries – in the automotive industry, in health care, and even in defense. Statista says that the number of IoT devices was already more than 15 billion in 2015, is more than 27 billion in 2019, and will grow to 75 billion by 2025 – meaning that it will have quintupled within a span of ten years. And those numbers represent a conservative estimate.

This is where the EMS industry – the industry that develops, manufactures, and delivers the “brains” for all these devices – comes in. Without the EMS industry’s electronic assemblies, components, solutions, and preliminary products, all these devices would remain without voice or intelligence. They would not be IoT devices. This is true of cars, refrigerators, drones, modern agricultural equipment, cash register systems, planes, lawn-mowing robots, smartphones, elevators, badge readers, and the list goes on and on – all the things that make up the modern world.

From small businesses to successful SMEs with billions in sales to DAX-listed corporations, Europe has thousands of companies that manufacture these complex IoT devices – devices whose “brains” are produced by the EMS industry. 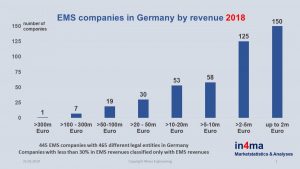 Today, the market is divided roughly into three parts: There are large, globally active EMS suppliers (for simplicity, we will lump EMS, E²MS, and ODM together and call them EMS here) from Asia and the United States. Together, they share 44% of the European market.

The only world-class German EMS supplier, Zollner, which has almost 5% of the European market share and billions in sales, is currently unique in terms of format, overall portfolio, and size, and thus an obvious partner for any German or European OEM who, for a variety of reasons, might be looking for a stable alternative to the large Asian and American companies. And after Zollner, there is nothing for a long way.

Throughout Europe, there are probably more than 1,500 companies, which control more than half of the market (52%), most of them very small (well below ten million euros in annual sales), a few with more than 100 million, and only a handful of players with more than 200 million. (This can all be seen in detail in in4ma’s database, the best available today.) In the long run, these companies will not survive because they will be unable to make the necessary investment in an increasingly innovative market. Nor will they constitute stable long-term partners for European OEM SMEs, to say nothing of large corporations. The fragmentation in Europe plays into the hands of the Asian and American giants.

We believe in the European EMS market. We believe that physical proximity to the customer is an advantage, and not only a logistical one. We believe that German and European SMEs want to work with partners on equal footing, that a shared idea of engineering and corporate culture is helpful, and that problems are best solved face to face.  But we also know that EMS suppliers must reach a critical mass of several hundred million in sales to be stable in the long term. They must buy parts at the best conditions, have the necessary resources to invest in new technologies, and, unlike many small suppliers, avoid unhealthy customer concentrations. They must also be in a position (including all the necessary certifications) to serve all essential industries, cover the entire value-added chain from development (as necessary) to after-sales, deliver batch sizes from the very smallest on up to large-scale production, and have an intelligent mix of production sites.

Katek SE Group, which currently has three subsidiaries, already largely fulfills these requirements, and will use targeted investment in further acquisitions over the next few quarters to add complementary skills and capabilities so that it can offer all OEMs an attractive alternative portfolio.

For instance, Katek GmbH is remarkable for its plants in Grassau and Gyoer/Hungary, which can fill highly automated large-scale production contracts based on all common certifications and has best-in-class testing technology. Steca, with its plants in Memmingen and Saedinenie/Bulgaria, has accumulated leading expertise in the area of power electronics for solar/energy with its own development team and supplied mid-sized batch sizes to leading OEMs in industries from the automotive industry to white goods to health care. ETL, the latest member of the family, complements the portfolio with its cutting-edge plant in Mauerstetten. It is remarkable for its great flexibility and can produce the very smallest batch sizes, including NPI/prototyping, in excellent quality. A special focus is on embedded systems, which ETL not only manufactures, but, as desired, develops completely for all industries.

We believe that Katek SE will become much more than just the sum of all its subsidiaries, and we will achieve that added value with our “speedboat” concept. The subsidiaries will continue to act as independent limited liability companies with P & L responsibility and the closest possible proximity to customers so that they remain quick, agile, flexible, and entrepreneurial – like those customers. We will quickly add synergies, especially in the areas of sales/marketing and strategic purchasing, by means of central control. Setting up competence centers in the individual subsidiaries will help us to avoid creating redundant instances of scarce resources in such areas as testing technology, development, and prototype manufacture, instead making such resources available to all members of the Group.

It will be a long road. But Katek SE, part of a family-run holding company, has great staying power and the conviction that the greatly fragmented European EMS market requires consolidation if it is to provide OEMs a clear alternative. We want to earn their trust. Complete transparency about what we intend to do is part of the process. Our objective is, by mid-2019, to convince each OEM that it makes sense to at least consider Katek SE in all relevant calls for tender.

Spartronics Case Study: A NEUROSTAR® IS BORN, Delivering a New Neurological Device from Concept to Market