The market research of the in4ma statistical program for the European EMS industry for 2018 is finished. Many numbers have already been flying around, but they were all preliminary as some data were still missing. Four weeks ago, Weiss received the total data for France from the French Electronics Association SNESE and this completed the European picture. There are now 2154 EMS companies in the in4ma databank belonging to 1885 companies and when asked, whether that is it, Weiss replies: “There are still another 69 companies which have to be crosschecked and this is a little difficult as these companies have no homepage on the internet”. These 69 companies will probably not change the numbers anymore, as they are most likely all in the region of two mil. Euro or less and account for about 0.3% of the total European EMS production value.

Due to the nature of the in4ma market research using primary research in the country company registers, the in4ma annual EMS survey and other reliable sources, the in4ma databank contains at present 2223 companies with contact data, revenues and headcount sortable by country or revenue groups from 2013 to 2018. Those address files are used mainly by suppliers, who finally want to understand who the potential customer base is. The addresses are updated once a year, Germany and Austria even twice and in4ma is proud to maintain such accurate data. 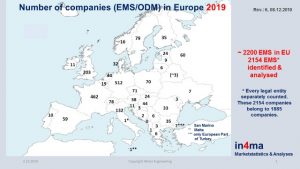 For several countries the in4ma databank maintains P&L and balance sheet data as well, which are analyzed more in detail in order to see trends and developments. The results of these analyses are regularly presented at international conferences such as the EMS-day of Elektronikpraxis, run by Vogel Verlag (next on June 18, 2020, Wuerzburg/Germany, www.ems-tag.de) and the EMS seminar organized by the Estonian Electronics Industries Association (next in Nov./Dec. 2020, Tallinn/Estonia, www.estonianelectronics.eu).

The revenue figures of the in4ma statistics is just an easy click in the Excel file of the databank, showing a total production value for 2018 of 42.081 Billion Euro. A 9% growth, which needs further interpretation. This growth was helped by price increases due to allocation problems, but the majority was production transfers and tremendous revenue growth of global players in their East European factories such as Flex in Hungary (+40%), Wistron in Czech Republic (+209%), Foxconn in Czech Republic (+12%), Jabil in Hungary (+60%). A potential explanation could be a statement of Simon Lin, Chairman/CSO of Wistron Corp.: “We will enhance the distribution and balance of our global operation sites” 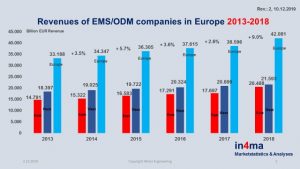 Manufacturing Geographic’s in the EMS/ODM industry are changing and production is coming closer to the end market, maybe with the help of the trade war.

The 42.081 Billion Euro equals 49.7 Billion USD, when properly converted with the average annual conversion rate of 1.181 for 2018. It is important to mention this, in order to avoid these severe misinterpretations by some analysts when comparing the upcoming 2019 data for Europe in USD with the 2018 data. It looks as if the average exchange rate Euro/USD will be about 1.1 for 2019. This will be a 6.8% decline. Some “experts” can then easily misinterpret any European EMS production growth below 6.8% for 2019 as a weakness of the European EMS market. This is Europe, we do business in Euro, not in USD.

Even though there was a lot of talk about a European recession, Weiss has always stated that there is no recession, not in the electronics industry and especially not in the EMS industry. Looking at the definition of the National Bureau of Economic Research (www.nber.org), a recession is a significant decline in economic activity spread across the economy, lasting more than a few month, normally visible in: Gross domestic product (GDP), Real income, Employment, Industrial production and Wholesale – retail sales.

As of today there is only a slowdown in certain areas of industrial production, mainly due to cautiousness of buyers. This cautiousness could be influenced as well with the purchasing managers index for Europe. When some people become cautious, others follow and when it is mentioned often enough in the press, it becomes a self-fulfilling prophecy. We do not even have a technical recession in Germany, which would be based on two consecutive quarters of negative GDP. But it is a tearful headline for the press and catches attention.

It is no question, that certain Tier 1 companies to the automotive industry are having problems, as the automotive industry slashed their building programs. The reasons for this itself would be a two pages article. With reduced forecasts the Tier 1 have a big problem. Most of the production is highly automated, implying a lot of fixed cost. Such manufacturing lines will generate higher cost per unit, when not utilized 100%. Higher cost per unit will reduce profits and in consequence many Tier 1 companies have handed over some production to EMS companies in order to reduce cost.

So when we look at public European EMS companies, which publish their quarterly results, such as Cicor (halfyear), Incap, Kitron, Neways, Norbit, Note, Scanfil, calculate their organic growth (excluding acquisitions) and compare this to the same period of 2018 we get to a growth for the first nine month of 9,6% so far for 2019. Neways even states that this growth was helped by the automotive industry and Norbit announced a large agreement with the German industry giant and Tier 1 Continental Automotive, increasing their sales for the first nine month by 54%.

The fact, that the in4ma market research numbers can easily be explained, was helpful for the industry as well as for Weiss Engineering. Today in4ma statistics are not only used by the EMS industry but as well by bank investment analysts, private equity companies, M&A advisors and industry consultants. No wonder with such a meticulous approach.

Meet Weiss Engineering at SMTconnect, May 5-7, 2020 in Nuremberg/Germany. He will be exhibiting there, as this exhibition is becoming the leading exhibition for the European EMS industry.