Even with more fabs, strong unit growth will keep industry capacity utilization at 93.0% in 2022.

IC Insights’ February 1Q Update to The McClean Report 2022 includes an overview of IC industry capacity and wafer start trends from 2002 through 2026.  This bulletin provides a brief summary.

The volatile nature of the IC industry is reflected by large swings in annual wafer starts.  Over the past five years, for example, annual wafer start growth rates have ranged from -4.7% in 2019 to 19.0% growth in 2021.  The industry’s installed wafer capacity also fluctuates according to market conditions, but the changes are not usually as dramatic as they are for wafer starts. The annual wafer capacity growth rates over the past five years have ranged from 4.0% in 2016 to 8.5% in 2021 (Figure 1). 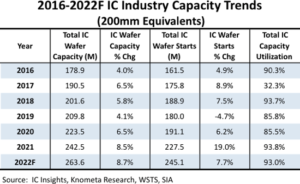 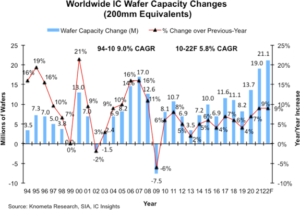 The 8.7% jump in IC industry capacity forecast for 2022 will come primarily from the addition of 10 new 300mm wafer fabs that are scheduled to open this year (three less than were added in 2021). The biggest increases in capacity are expected to come from the large new memory fabs of SK Hynix and Winbond as well as the three new fabs (two in Taiwan; one in China) from TSMC, the world’s largest pure-play foundry.  Other new 300mm fabs include CR Micro’s fab for power semiconductors; Silan’s fab for power discretes and sensors; TI’s RFAB2 facility for analog devices; ST/Tower’s fab for mixed-signal, power, RF, and foundry; and SMIC’s new fab for foundry operations.

Despite inflationary pressures, ongoing supply chain issues, and other economic difficulties, IC unit demand remains robust. IC Insights forecasts IC unit shipments will increase 9.2% this year.  Even with 10 new wafer fabs entering service, solid unit demand is expected to help keep the worldwide capacity utilization rate at an elevated level of 93.0% in 2022 (shown earlier), which is only a slight decline compared to 93.8% 2021.