Fort Worth, TX, – TTI, Inc., a leading distributor of electronic components, announces the passing of Paul Andrews, TTI founder and CEO. At the helm for 50 years, Andrews’ vision has led TTI to extraordinary success as one of the industry’s leading distributors.

In 1971, Andrews turned his dream into a self-made success. From humble beginnings at his kitchen table in his hometown of Fort Worth, Texas, Andrews began building the foundation of the company that he would transform into a billion-dollar global business. Today, TTI is home to over 7,000 team members worldwide and includes Mouser Electronics, Sager Electronics and the TTI Semiconductor Group. 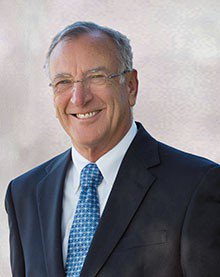 Andrews envisioned an organization with a culture of continual business process improvement, with all TTI employees throughout the world thoroughly committed to the best business practices. TTI’s success is a direct result of his exceptional leadership. The company’s mission established by Andrews early on still resonates throughout the organization. A firm believer in doing what you say you are going to do and providing exceptional service, this credo has propelled the company and its founder to be among the most respected in the industry.

A turning point in the history of TTI came in 2006, when Andrews had the opportunity to meet investment icon Warren Buffett. The following year, TTI became part of the Berkshire Hathaway family of companies. In 2018, Buffett offered this comment about Andrews, “TTI is run by a fellow named Paul Andrews, who’s done an absolutely sensational job with us. He’s a wonderful man. He’s a wonderful manager.”

Andrews was not only an entrepreneur, businessman and visionary, he was a pillar of the Fort Worth community. In 2020, the Fort Worth Chamber of Commerce named Andrews the recipient of the annual Susan Halsey Executive Leadership Award. In 2011, Andrews was inducted into the Fort Worth Business Hall of Fame. He served on the board of trustees at Trinity Valley School in Fort Worth. Most recently Andrews was acknowledged for his notable contributions to Texas Christian University and Texas Wesleyan University and was honored by both universities with honorary doctorate degrees. Their vigorous efforts on behalf of education helped establish the Paul and Judy Andrews Industrial Distribution Conference Center on the Texas A&M campus in 1996.

In 2005, Andrews and his wife, shared their vision and their commitment to their hometown by becoming significant contributors to the Paul and Judy Andrews Women’s Hospital, part of the Baylor All Saints Medical Center in Fort Worth.

Andrews, 78, is survived by his wife, Judy, their three children and eight grandchildren.

The Paul E. Andrews, Jr. Foundation, created in 2007, will continue its focus on supporting education and health care initiatives in the Fort Worth community. In lieu of flowers, charitable contributions in honor of Andrews’ memory may be directed to:

TTI, Inc., a Berkshire Hathaway company, is an authorized, specialty distributor of electronic components. Founded in 1971, the emphasis on a broad and deep product portfolio, available-to-sell inventory and sophisticated supply chain programs have established TTI as a distributor of choice to manufacturers in the industrial, defense, aerospace, transportation, medical, and communications sectors worldwide. TTI and its wholly owned subsidiaries, the TTI Family of Companies, Mouser Electronics, Sager Electronics and TTI Semiconductor Group employ over 7,000 people in more than 133 locations throughout North America, South America, Europe, Asia and Africa. Globally, the company maintains over 2 million square feet of dedicated warehouse space housing over 850,000 component part numbers. For more information about TTI, visit www.tti.com.