In 2021, five of the top 10 semiconductor companies were fabless suppliers.  In 2008, there was one fabless company in the ranking; in 2000, there were none.

IC Insights’ 2Q Update to The McClean Report 2022 will be released in May. It presents an analysis of the marketshare of the major semiconductor suppliers excluding the pure-play foundries (Figure 1).  While there is a small amount of double-counting effect due to the IDM foundry revenue included in the figures, it is not large enough to significantly alter the trend discussed below. 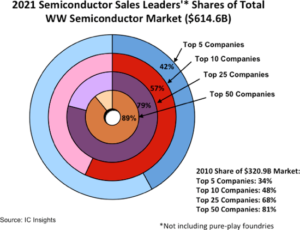 In 2021, the top 50 semiconductor suppliers, not including the pure-play foundries, represented 89% of the total $614.6 billion worldwide semiconductor market, up eight points from the 81% share the top 50 companies held in 2010.  As shown, the top 5, top 10, and top 25 companies’ share of the 2021 worldwide semiconductor market increased 8, 9, and 11 percentage points, respectively, as compared to 2010.  With additional mergers and acquisitions expected over the next few years, IC Insights believes that the consolidation could raise the shares of the top suppliers to even loftier levels.

History of the Top 10 Ranking

Excluding foundries, there were two new entrants into the top 10 ranking in 2021—Taiwan-based fabless supplier MediaTek and U.S.-based fabless supplier AMD.  These two companies replaced Apple and Infineon in the top 10 ranking last year.  MediaTek registered an amazing 61% jump in sales, which moved the company up three positions in the ranking (from 11th to 8th) while AMD posted an even larger 68% surge in sales in 2021 to go from the 14th position to the number 10 spot in the ranking.

All of the top 10 companies had sales of at least $16.4 billion in 2021.  As would be expected, given the possible acquisitions and mergers that could occur in the future, the top 10 semiconductor ranking is likely to undergo some significant changes over the next few years as the semiconductor industry continues along its path to maturity. 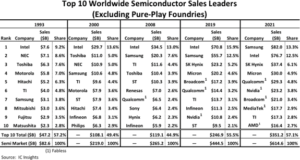 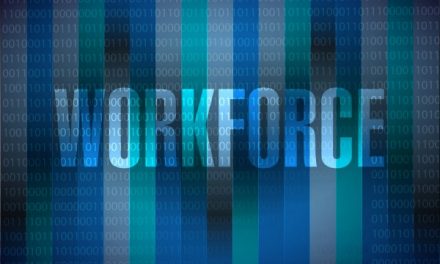 Reskilling and Upskilling in the Microelectronics Industry After COVID-19