FRAMINGHAM, Mass. – Preliminary results for the global traditional PC market, inclusive of desktops, notebooks, and workstations, totaled 64.9 million units in the second quarter of 2019 (2Q19), according to International Data Corporation (IDC) Worldwide Quarterly Personal Computing Device Tracker. Year-over-year growth during the quarter reached 4.7%, which was notably higher than expected as the easing of supply shortages combined with looming trade tensions to propel the market forward.

“Supply for Intel’s processors improved markedly during the quarter, allowing most PC vendors to fulfill old orders while also shipping a healthy supply of new PCs into the channels,” said Jitesh Ubrani, research manager for IDC’s Mobile Device Trackers. “Additionally, the threat of increased tariffs led some PC makers to ship a surplus of desktops and notebooks, thereby artificially propping up the PC market during the second quarter.”

However, higher than anticipated growth was not driven solely by changes in the supply chain. “With the January 2020 end of service (EOS) date for Windows 7 approaching, the market has entered the last leg of the Windows 7 to Windows 10 commercial migrations,” noted Linn Huang, research vice president, Devices & Displays. “However, the closing sprint is unlikely to generate the spike seen when Windows XP met its EOS because we are further ahead of the migration with two quarters to go. Still, organizations looking to finish their migration will create new opportunities for the market in the coming quarters.”

After a sluggish start to the year, the traditional PC market in the United States seems to be back on track, recording high single-digit growth in the second quarter backed by volume increases in both desktops and notebooks. The improved sell-in was the result of multiple factors, including vendors filling in inventory ahead of back-to-school season, corporations refreshing systems ahead of the Windows 7 EOS deadline, and an overall strong inventory pull-in as the threat of additional tariffs on U.S. consumer goods remains high.

The traditional PC market in Canada posted its 12th consecutive quarter of growth. The preliminary figure is 11.0%, which is the highest year-over-year growth in nine years (since 2Q10). The commercial markets continue to outpace weak consumer demand with migration to Windows 10, increased adoption of Chrome in commercial, and strong growth in PC as a service (PCaaS) all contributing to commercial demand. Pent-up demand from component constraints are beginning to normalize, which also helped to push the numbers up this quarter. The fear of increased tariffs and a potential trade war are great topics for conversation but aren’t manifesting into a tangible increase in demand yet.

Japan’s commercial segment maintained strong momentum in 2Q19 after an already strong first quarter. Meanwhile, the consumer segment also saw healthy growth as many consumers were looking to make purchases before an increase in sales tax is implemented.

The traditional PC market in Asia/Pacific (excluding Japan) (APeJ) beat IDC’s forecast with shipments posting modest year-on-year growth. India produced better than anticipated results primarily due to earlier than expected deployments to the ELCOT education tender, which reached close to 1.1 million units. However, other segments of this market remained soft, impacted by the recent elections, weak demand, and overstock. In China, consumer notebook shipments recorded an increase, fueled by good sales of low-end ultraslim devices, online channel promotions, and inventory build-up. On the other hand, China’s commercial market remained weak with both the SMB and government segments impacted by the ongoing US-China trade tensions.

After two consecutive quarters of year-over-year decline, Europe, Middle East, and Africa (EMEA) witnessed growth in the traditional PC market in 2Q19. This was primarily driven by the commercial segment stemming from the strong demand for PC refresh ahead of Windows 7 EOS early next year. Despite the ongoing shift towards mobility adoption, a strong performance from desktops supported the overall results of the quarter. Fulfillment of order backlogs caused by the Intel CPU shortage from earlier this year contributed to the strong desktop shipments in the region.

The Latin America market continued its negative trajectory in 2Q19, although with better results than previous expectations. The improved results were driven by the commercial segment, mainly public investments and SMB, with some help from entry-level notebooks for consumers.

Lenovo moved into the top position, capturing 25% of the market with more than 16.2 million units shipped. The company has won some large commercial bids, such as the ELCOT project in India, which helped drive shipments. Beyond that, the fear of additional tariffs led Lenovo (along with others) to ship additional units during the quarter.

HP ranked second with 3.2% year-over-year growth. EMEA, the United States, and Japan were the company’s strongest performing markets as HP experienced positive growth in each region.

Dell Technologies maintained the third position with healthy 3.1% growth during the quarter. Desktops once again proved to be Dell’s strong suit as the company managed to raise its share in the desktop market by 1 percentage point.

Acer Group was one of the few companies that saw a decline this quarter despite having shipped additional units ahead of potential tariffs. The company continues to perform well in the value segment of the market and regions such as North America and Japan remained strongholds.

Apple rounded out the top 5, shipping nearly 4.1 million units. Like other companies, Apple managed to move additional units into the channels to fend off potential tariffs. Additionally, the recent launch of new notebooks leaves the company in a position with plenty of inventory on-hand.

• Some IDC estimates prior to financial earnings reports. Data for all companies are reported for calendar periods. 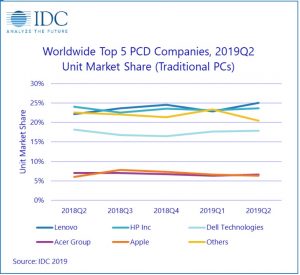 Can We Believe The Hype About China’s Domestic IC Production Plans?