The automotive industry files the most patents

The majority of patent applications received by the German Patent and Trade Mark Office last year came from the automotive industry and its suppliers, and when it came to company location, there was a clear north-south divide.

The German Patent and Trade Mark Office (DPMA) reported that with a total of 4,230 applications, Bosch was the most active patent applicant in 2018, followed by Schaeffler and Ford. Other companies in the Top 10 included BWM, Daimler, VW, and Audi, most of which are based in southern Germany. The only non-automotive company to make it into the ten most active patent applicants in Germany was Siemens. 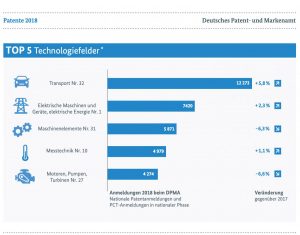 What was also striking was the sharp 6.8% increase in patent applications from the electrical engineering sector. This was in particular due to the ‘Computer technology’ technology field, was saw the number of applications rocket by 26.7% in 2018. According to the DPMA, this was predominately attributable to the rise in the filing figures for software-based inventions, including applications of artificial intelligence (AI).

Koh Young America Service Deemed the Best in its Segment