Top-10 analog suppliers collectively accounted for 68% of analog sales in 2021.

With analog sales of $14.1 billion and 19% marketshare, Texas Instruments maintained its firm grip as the world’s leading supplier of analog devices in 2021.  TI’s 2021 analog sales increased nearly $3.2 billion or 29% compared to 2020, according to IC Insights’ 2Q22 Update to The McClean Report that was released in May. TI’s 2021 analog revenue accounted for 86% of its $16.3 billion in IC sales and 81% of its $17.3 billion in semiconductor revenue.

The complete list of top 10 analog IC suppliers for 2021 is shown in Figure 1.  IC Insights’ ranking includes sales of general-purpose analog components, mixed-signal analog, and application-specific analog devices that have at least 50% analog circuitry on board.  This follows the definition established by WSTS that reads, “Devices are classified as analog if at least 50% of the total die area of the integrated circuits(s) in the device is occupied by analog circuitry.”  As shown, the ranking of top analog suppliers remained unchanged in 2021 compared to 2020. 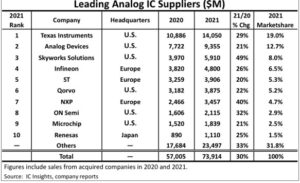 Second-ranked Analog Devices, Inc. (ADI) saw its 2021 analog IC sales increase 21% to $9.4 billion, which represented 13% marketshare.  ADI completed its $28.0 billion acquisition of Maxim Integrated products in August 2021.  The company said its analog devices (including devices it obtained through its Maxim acquisition in 2021 and its 2017 acquisition of Linear Technology) address opportunities “from sensor-to-cloud, DC to 100 gigahertz and beyond, and nanowatts to kilowatts.”  ADI’s 2021 analog sales by end-use application were industrial (50%), automotive (21%), communication (15%), and consumer (14%).

Ranked third in 2021 with analog sales of $5.9 billion was Skyworks Solutions, whose 49% jump in revenue was the largest percentage increase among the top analog suppliers last year.  Skyworks is focused on front-end modules and power amplifiers for handsets and smartphones, highly integrated SiP and SoC devices for wireless infrastructure, power management chips, precision analog components, WiFi connectivity modules and ICs, and smart energy ICs for ZigBee and Bluetooth applications. Skyworks’ largest customer in 2021 was Apple, which accounted for 59% of its sales.

In July 2021, Skyworks acquired the Infrastructure and Automotive business of Silicon Laboratories Inc for $2.75 billion to accelerate its expansion into electric and hybrid vehicles, industrial and motor control, 5G wireless infrastructure, optical data communication, data center, and other applications.

Each of Europe’s three major IC suppliers—Infineon, ST, and NXP—was a top 10 analog supplier in 2021. Collectively, the three companies accounted for 16% of global marketshare.  Fourth ranked Infineon was the highest placed European analog supplier with sales of $4.8 billion.  Infineon continues to grow its presence in automotive, which accounted for 44% of its 2021 sales compared to 41% in 2020. Power/sensor systems (29%), industrial power control (14%) and connected security (13%) round out its other major end-use applications.

Analog ICs remain a critical component in nearly all digital-centric systems. The analog market typically grows (and declines) at a more tempered rate than the total IC market, but that was not the case in 2021. The analog market grew by 30% last year, while the total IC market increased 26%. Every general purpose and application specific analog product segment enjoyed double-digit sales growth in 2021. Signal conversion revenue grew 13% last year, but revenue in every other analog IC category jumped by at least 27%.

Gartner Predicts by 2021, CIOs Will Be as Responsible for Culture Change as Chief HR Officers