EPSNews’ Barbara Jorgensen analyzes the evolution of the ODM business model in Taiwan with help from EMSNOW publisher, Eric Miscoll.

The ascension of mainland China as a manufacturing powerhouse has been both a blessing and a curse for the electronics manufacturing services (EMS) industry in Taiwan. While China was evolving as the low-cost destination for manufacturing, Taiwan EMS providers were improving their design capabilities and addressing intellectual property (IP) protection. Rather than an “either/or” decision about manufacturing in Taiwan or China, international OEMs are leveraging both regions for a combination of design and manufacturing services.

“The ODM model was originally premised on OEMs buying finished/ off-the-shelf product that ODMs built based on their own designs,” said Eric Miscoll, EMS industry analyst and publisher of EMSNow. “This was a profitable business for the ODMs and allowed them to sell essentially the same product to multiple OEMs. The example I use is VCRs.However, as OEMs demanded more service in terms of differentiated products, the ODM’s cost model increased to satisfy the OEM’s demands.”

Taiwan EMS providers have now evolved largely as original design manufacturers (ODMs). As such, they can take advantage of China’s low-cost production. But it was China that pushed Taiwan’s EMS industry toward a more value-added business. Although most ODMs also provide manufacturing services, design is a more profitable business. ODM profit margins are typically in the double digits, said Miscoll; EMS margins have long been in the low single digits.

In the early 2000s, Taiwan’s ODMs began looking toward China. “What the ODMs discovered is that they always had China as a low-cost labor alternative,” added Miscoll. “Taiwan EMS companies were manufacturing in China before the U.S. and other nations moved offshore.”

In China, Taiwanese manufacturers began with dedicated facilities. These factories — which were likely subsidized by the Chinese government — were managed by Taiwanese personnel who employed mainland Chinese workers. Despite all of the public and political issues that have confronted Taiwan and China since, Taiwan knew that it could leverage its relationship with China, said Miscoll.

“The reality is that [China and Taiwan EMS vendors] have a good relationship,” he added.

Political observers see the market differently. Taiwan has been resistant to becoming part of China, which could certainly disrupt business relationships. China could use economic leverage to pressure Taiwan. According to the Washington Post, China is Taiwan’s largest trading partner and China is Taiwan’s main destination for outbound investment; 40% of Taiwan’s exports flow to China and a fifth of Taiwan’s gross domestic product derives from its economic ties to the mainland.

As the political drama plays out, it’s notable that, of Manufacturing Market Insider’s 50 largest EMS providers in the world, four of the top 10 — Hon Hai (Foxconn), Pegatron, Wistron, and New Kinpo — are based in Taiwan. Only one China-based EMS — Universal Scientific Industrial Co. — ranks within the top 10.

The top 50 EMS providers, according to Manufacturing Market Insider, surpassed $300 billion in sales in 2017.

According to Beroe Market Intelligence, 75% of the global EMS market is held by Taiwanese companies. Taiwan manufacturers saw the ODM opportunity early.

As far back as the 1960s, Taiwan assembled such products as transistor radios, tape recorders, and some transistor packaging. In the 1970s, Taiwanese firms entered the component manufacturing business. By the 1980s, Taiwan entered into computer manufacturing with United Microelectronics Corp. (UMC)’s semiconductors, the IBM-compatible PC, 256K DRAM development, color monitor production, and establishment of Taiwan Semiconductor Manufacturing Co. (TSMC). In 1983–1984,

Taiwan’s Electronics Research and Services Organization (ERSO) and local companies launched a project to shorten the product development cycle of IBM-compatible PCs. The transition toward ODM had begun.

As a manufacturing destination, Taiwan still has a significant advantage over China in regard to IP. Taiwan established an Intellectual Property Court in 2008; China has yet to address IP security concerns. However, analysts predict that China will accelerate its transition toward ODM.

“I think China has faded as the low-cost destination,” said Miscoll. “They leveraged that back in the day. The role China wants to play moving forward has changed. China’s engineers are advancing, although we haven’t seen a lot of that on the [design-for] application side.”

Whether Taiwan will shift more toward component manufacturing is, so far, unclear. “I think the business relationship between China and Taiwan continues to evolve,” said Miscoll. “Global consumers have become addicted to cheap electronic products with these two [regions] being in the forefront of this. Taiwan used to be, and maybe still is, huge in fabs, but they also moved those from Taiwan to mainland China. I think migration to more product-based models [OEM/ODM], products, or sub-assemblies or some form of component is where the higher margins are.”

At the same time, he added, “Foxconn is still the ‘big dog’ in EMS and, in regard to Taiwan-based companies, accounts for more than 50% of EMS revenue.”

In fact, Manufacturing Market Insider calculates the EMS industry’s growth rate with and without Foxconn in the mix.

“If you look at the business model going forward, I think you’ll see R&D based in Taiwan but manufacturing elsewhere,” concluded Miscoll. “It will be interesting to see how things develop between these two [regions], which have one of the more unique business relationships on the planet.” 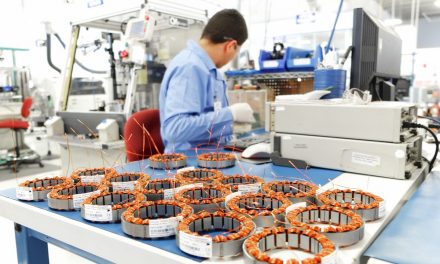