Affected by tight wafer supply, lead time for SSD controller IC and PMIC components was prolonged to 32 weeks in 2021. All controller IC suppliers generally give priority to supplying NAND Flash manufacturers, so production at module factories could not meet SSD demand in the retail market during that time. In 2H21, the supply of SSD-related components improved quarter by quarter and various module manufacturers boosted their SSD shipments in order to upsurge their annual performance. According to TrendForce research, SSD shipments through global distribution channels reached 127 million units in 2021, with an annual growth rate of 11%.

Looking at changes in the global SSD market in 2021, first, SSDs were in short supply due to a shortage of SSD related components in early 2021 and large module houses adopted a limited supply strategy in response as product prices rose. This increase in overall profit also prompted more module houses to follow suit. Some large module houses obtained support from SSD controller IC manufacturers due to their supply chain advantages, increasing their market share. Second, due to an inability to obtain a supply of upstream wafer production capacity in recent years, newly introduced controller ICs from mainland China have become a bottleneck in the supply of SSD controllers for certain Chinese manufacturers. Third, the pandemic festers and gaming-related demand remains strong, so the ranking of brands focused on gaming laptop-related products has also moved up.

The present ranking of SSD module manufacturers maintains a trend of the rich getting richer with the top three in terms of shipments remaining Kingston, ADATA, and Kimtigo. Of the top three, only Kingston’s market share moved lower. Due to their huge production demand, shipment volume was affected when wafer supply was too limited to meet order lead time. The biggest change on this list is Transcend’s ranking rising sharply from tenth place in 2020 to sixth place, as well as newcomers Powev and GIGABYTE.

Transcend’s long-term brand advantage comes from obtaining support from SSD controller IC manufacturers and the company’s shipments have grown significantly as a result. In particular, its SSD products are specially designed to meet the needs of Apple’s notebook upgrades. As Apple’s laptop market share grows, demand for relevant Transcend products increased and its SSD shipment market share rose to 5% in 2021. Benefiting from its long-term operation in the high-end gaming market and diversified product solutions, Powev entered the top ten as demand for high-end performance and game-related products retains strong growth momentum. Gigabyte also benefited from the company’s efforts to expand the supply of game-related components with its motherboard products driving SSD shipments.

The pandemic continuously disrupted the supply of SSDs in 2021. In addition to the supply of SSD controller ICs, a diversified distribution of production centers was also a key factor in enhancing the momentum of shipments. Looking to the future, the growth momentum of module factories focused on selling SSD interfaces will gradually shift from SATA to PCIe. However, compatibility issues are also more complicated than that of SATA SSDs due to the manifold increase of PCIe interface transmission speeds. Providing comprehensive services to assist in SSD product upgrades can enhance brand recognition and continue to boost shipments. TrendForce believes, in addition to cost, the ability to provide comprehensive global production and sales services will be an important factor in continuing to increase PCIe SSD shipments in the future.

Technology of storage products from Chinese enterprises continues to improve, the goal of localizing SSD production in China is just around the corner

TrendForce has also observed that in the SSD supply chain, the proportion of localization in China is increasing. Especially in controller IC technology, a number of manufacturers have gradually embarked on PCIe controller IC research and development and some module manufacturers have even partnered with Chinese servers to develop enterprise SSDs. After Intel started gradually withdrawing from Optane SSD supply, an existing Chinese manufacturer, DapuStor, has already adopted Kioxia XL Flash to launch an alternative solution with similar performance, hoping to capture market orders in this storage class memory (SCM) after Intel’s withdrawal. The above development clearly shows the role of Chinese manufacturers in the SSD supply chain gaining strength and there will be opportunities in the future to continue seizing market share through upstream and downstream integration. 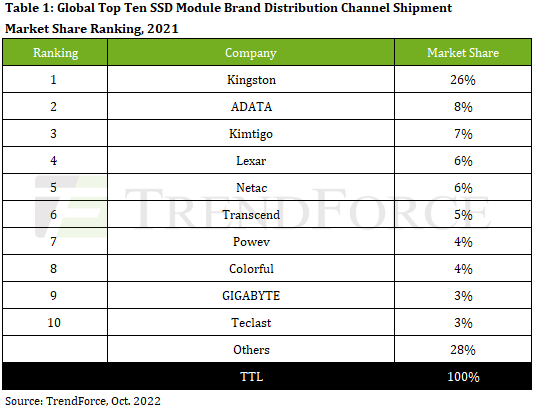