Spending on Compute and Storage Infrastructure Grew Strongly Across Cloud and Non-Cloud IT Environments in the First Quarter of 2022, According to IDC

NEEDHAM, Mass – According to the International Data Corporation (IDC) Worldwide Quarterly Enterprise Infrastructure Tracker: Buyer and Cloud Deployment, spending on compute and storage infrastructure products for cloud deployments, including dedicated and shared environments, increased 17.2% year over year in the first quarter of 2022 (1Q22) to $18.3 billion. This growth continues a series of strong year-over-year increases in spending on infrastructure products by both service providers and enterprises despite tight supply of some system components and disruptions in transportation networks. Investments in non-cloud infrastructure increased 9.8% year over year in 1Q22 to $14.8 billion, continuing a streak of growth for this segment into its fifth quarter.

At the regional level, year-over-year spending on cloud infrastructure in 1Q22 increased in most regions. Once again Asia/Pacific (excluding Japan and China) (APeJC) grew the most at 50.1% year over year. Japan, Middle East and Africa, China, and the United States all saw double-digit growth in spending. Western Europe grew 6.4% and growth in Canada slowed to 1.2%. Central & Eastern Europe, affected by the war between Russia and Ukraine, declined 10.3%, while Latin America declined 11.3%. For 2022, cloud infrastructure spending for most regions is expected to grow, with four regions, APeJC, China, the U.S., and Western Europe, expecting to post annual growth in the 20-25% range. Impact of the war will continue to hurt spending in Central and Eastern Europe, which is now expected to decline 54.6% in 2022. 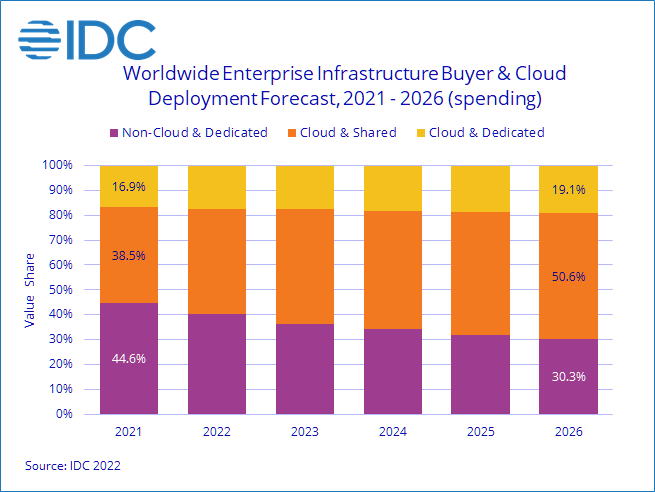 IDC’s Worldwide Quarterly Enterprise Infrastructure Tracker: Buyer and Cloud Deployment is designed to provide clients with a better understanding of what portion of the compute and storage hardware markets are being deployed in cloud environments. The Tracker breaks out each vendors’ revenue into shared and dedicated cloud environments for historical data and provides a five-year forecast. This Tracker is part of the Worldwide Quarterly Enterprise Infrastructure Tracker, which provides a holistic total addressable market view of the four key enabling infrastructure technologies for the datacenter (servers, external enterprise storage systems, and purpose-built appliances: HCI and PBBA).

IDC defines cloud services more formally through a checklist of key attributes that an offering must manifest to end users of the service.

Shared cloud services are shared among unrelated enterprises and consumers; open to a largely unrestricted universe of potential users; and designed for a market, not a single enterprise. The shared cloud market includes a variety of services designed to extend or, in some cases, replace IT infrastructure deployed in corporate datacenters; these services in total are called public cloud services. The shared cloud market also includes digital services such as media/content distribution, sharing and search, social media, and e-commerce.

Dedicated cloud services are shared within a single enterprise or an extended enterprise with restrictions on access and level of resource dedication and defined/controlled by the enterprise (and beyond the control available in public cloud offerings); can be onsite or offsite; and can be managed by a third-party or in-house staff. In dedicated cloud that is managed by in-house staff, “vendors (cloud service providers)” are equivalent to the IT departments/shared service departments within enterprises/groups. In this utilization model, where standardized services are jointly used within the enterprise/group, business departments, offices, and employees are the “service users.”

The USMCA’s Rapid Response Mechanism for Labor Complaints: What to Expect Starting July 1, 2020