Contract prices of mainstream products generally held steady in November following their stabilization in the prior month, according to TrendForce’s latest investigations. However, contract prices of low-density products (including DDR2 and DDR3 1/2/4Gb) rallied in advance due to the sentiment of tightening supply, with DDR3 4Gb seeing the most widespread adoption. Specifically, there are not many DRAM suppliers that provide low-density chips for specialty (or consumer) applications. On the other hand, the average and high prices of DDR3 2Gb chips, which were primarily promoted by Taiwan-based suppliers, crept up 1% from October, due to the gradual cutbacks in the two major Korean manufacturers’ supplies.

TrendForce indicates that a quote rebound will occur first for specialty DRAM products that are either low in density or sold to medium and small clients. First, as previously mentioned, the two major Korea-based DRAM suppliers Samsung and SK Hynix have been gradually reducing their DDR3 supplies. Hence, the market for low-density DRAM chips is now mainly supplied by a few Taiwan-based memory manufacturers, including Winbond, ESMT, and Etron. This shrinkage of supply has contributed to the turnaround in prices. Furthermore, demand is returning for end products containing specialty DRAM. For instance, sales of digital TVs and set-top boxes have been rising instead of falling lately because the pandemic has led to the establishment of new norms such as working from home and online learning. Also, the demand for networking devices such as Wi-Fi (or wireless) routers, traditional routers, and modems continues to gain momentum as more 5G infrastructure projects are being executed worldwide. Since many of these end products and applications only require low-density DRAM components, prices of low-density specialty DRAM chips have rallied on the back of the growing demand.

In addition, the average and high prices are the first to rise because they are mostly set for medium and small clients. In contract trading, the quotes that suppliers offer to top-tier clients are on the low side because of the huge procurement quantities and the quarterly lock-in arrangements. In other words, the low price of a specialty DRAM product is the result of transactions with top-tier clients. Medium and small clients generally procure lesser quantities through contracts for shorter periods (e.g., monthly or weekly). They get higher quotes that are also more easily subject to sudden changes since they are not in a strong position to negotiate down prices. Hence, the average and high prices of a specialty DRAM product are the results of this other category of transaction and often the first to shift up. Finally, weak demand for mainstream server DRAM products is the primary reason why only low-density products have experienced a price upturn and not mainstream and high-density products. Currently, DDR4 8Gb chips are used in the majority of server DRAM modules. The demand slowdown in the server DRAM market therefore has a knock-on effect on both the PC DRAM market (where DDR4 8Gb chips are also mainstream) and the specialty DRAM market (where prices of DDR4 8Gb chips are constrained from rising).

In sum, the latest rebound in DRAM prices differs from the previous rallies that were initiated in the commodity DRAM segment. This time, low-density specialty DRAM products for medium and small clients are leading the rally. TrendForce anticipates that this unique phenomenon will continue at least through 1Q21. The major cloud service providers will likely restart large-scale procurement following 1Q21, and this will then lead to prices of mainstream chips rising along with low-density ones in the specialty DRAM market. 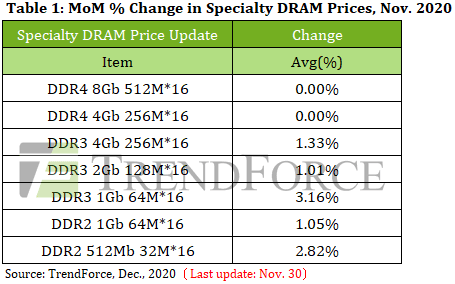