A 13% increase is expected to lift total semiconductor shipments to a new record high.

Total semiconductor unit shipments, which include integrated circuits as well as optoelectronics, sensor/actuator, and discrete (O-S-D) devices, are forecast to rise 13% in 2021, to 1,135.3 billion (1.1353 trillion) units to set a new all-time annual record, based on data presented in the 2021 edition of IC Insights’ McClean Report—A Complete Analysis and Forecast of the Integrated Circuit Industry, which was released in January 2021.  It would mark the third time that semiconductor units have surpassed one trillion units in a calendar year—the first time being in 2018 (Figure 1).

The largest annual unit growth rate across the 43-year span shown in Figure 1 was 34% in 1984 and the second-highest growth rate was 25% in 2010.  In contrast, the largest annual decline was 19% in 2001 following the dot-com bust.  The global financial meltdown and ensuing recession caused semiconductor shipments to fall in both 2008 and 2009; the only time there have been consecutive years of unit shipment declines.

Total semiconductor shipments are expected to remain weighted toward O-S-D devices in 2021 (Figure 2). O-S-D devices are forecast to account for 67% of total semiconductor shipments compared to 33% for ICs. With 38% share, discrete devices are expected to account for the largest portion of semiconductor shipments followed by optoelectronics (26%), and analog IC devices (18%).  Product categories that are forecast to see some of the strongest unit growth in 2021 are components that target network and cloud computing systems, contactless (touchless) systems, automotive electronics including autonomous systems, and devices that are essential to the rollout of 5G technology applications. 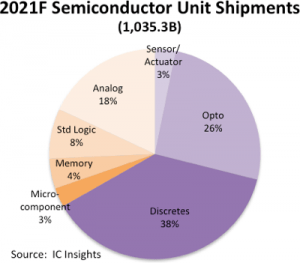