“Breaking news: Chips and materials are missing. The Electronics industry in Europe is expecting massive slumps in sales.” Those were the headlines in some electronics industry magazines in Europe last week. Industry consultant Dieter G. Weiss, who leads market research firm in4ma, argues that things are not as clear as they seem. 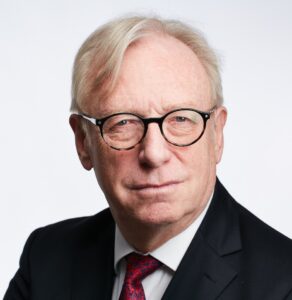 Data from five public Scandinavian EMS companies Hanza (Sweden), Incap (Finland), Kitron (Norway), Note (Sweden), and Scanfil (Finland) reveal an increase in revenues on average by more than 39%. This was not all organic, to be sure; Kitron had bought BB Electronics in Denmark and Hanza had bought Beyers in Germany, but even when deducting those revenues, it was still about  25% of organic increase. In addition, GPV published excellent results, lifting their revenues by 49% and this week Lacroix electronics followed with 45,7%.

This was evidence enough for Weiss to query: What crisis?

In the past two weeks,  in4ma has contacted 390 EMS companies in Europe to find answers.  The outcome is data from 115 EMS companies with 227 independent legal entities, who were asked to give their personal forecast for annual 2022 revenues based on the results of the first half of 2022 and the known obstacles for the second half.

in4ma knew the 2020 and 2021 revenues for all these 115 companies. They asked: What are you going to sell in the full year of 2022 and which part of this change to 2021 is due to price increases or forwarding extra cost for buying material on the spot market or other costs are you forwarding to your customers as a result of the semiconductor “crisis”.

The 115 companies who responded came from 20 different European countries and there was not a big difference in the answers. 14 companies (12.2%) forecast no growth in sales or a decline in sales. 15 companies (13.0%) reported single-digit sales growth. 86 companies (74.8%) reported double-digit sales growth, one company even reported 100% growth, i.e. a doubling of sales. Many were in the 25 to 45% range. The revenue-weighted average is 21.9% across all 115 notifiers, with the largest revenue decline being 37%.

Of course, they also asked how high was the proportion of price increases or additional costs charged to customers. Surprisingly, there were 13 companies (11.3%) who stated that they had not increased prices in the last 12 months. Of these, 9 companies had also not reported any sales growth or a sales decline.

The weighted average of price increases and cost transfers was 8.7%, while volume growth and new orders led to an increase in sales of 13.2%. Looking back at the revenue development in Europe for the last nine years, Europe had never recorded such a large growth in sales (volume! not price!).

“Ok back to the original question,” added Weiss. “We are talking about a 13.2% quantity growth for 2022, and is that due to the semiconductor crisis? They were missing chips? Were they just confused? Were they missing potato chips?” he quipped. “Was this just artificial in order to finally get prices for semiconductor manufacturers up and increase profits of the distributors? Did they find a way to manufacture PCBAs without semiconductors?”

There are still many open questions and Weiss would love to hear from EMSNOW readers with their explanations of why we have a crisis: weiss@in4ma.de

Actually, Dieter Weiss is pretty sure about the reasons leading to this and will present his views on September 8 at EMS-Day in Wuerzburg Germany as well as on December 1st at the EEIA/IPC seminar in Tallinn/Estonia. 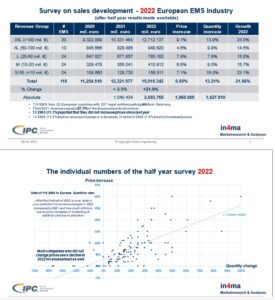 Solar and renewable energy trends in 2021