The ongoing healthy orderbooks and positive future prospects have made it possible for Rehm Thermal Systems to further expand its headquarters and invest in a new building. The new building will create more space for employees and innovation, providing an ideal base for the manufacturer of thermal system solutions from Blaubeuren-Seißen to develop further. The building is expected to be completed and inaugurated by 2020, when the company is set to celebrate its 30th anniversary. 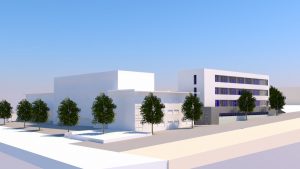 Rehm Thermal Systems’ new administrative and development centre, which will be located right next to the existing buildings, will be spread over four storeys, reaching almost the same height as the existing office building. The new building will provide more than 1,500 m2 of office space plus a development centre. Space in the new building is urgently needed: Rehm Thermal Systems currently employs more than 300 people at its headquarters in Blaubeuren-Seißen – and this is set to increase as a result of the continued good order situation and positive future prospects.

Construction work for the new building has got underway in recent weeks, the foundation already having been laid. The new building is expected to be completed and inaugurated next year – a year that will be special for Rehm: Founded in 1990 as a two-man operation by Johannes Rehm, the company will celebrates its 30th anniversary in 2020. Over this period, Rehm Thermal Systems has established itself as a technological leader in the field of innovative electronic components manufacturing, while benefitting from the increasing demand in sectors such as consumer electronics, the automotive industry, medical technology and aerospace.

Rehm is a technology and innovation leader in the state-of-the-art, cost-effective manufacturing of electronic assembly groups and specialises in thermal system solutions for the electronics and photovoltaics industry. Rehm is a globally active manufacturer of reflow soldering systems using convection, condensation or vacuum, drying and coating systems, functional test systems, equipment for the metallisation of solar cells and numerous customised systems. We have a presence in all key growth markets and, as a partner with almost 30 years of industry experience, we are able to implement innovative production solutions that set new standards.

The crisis is not over yet, says Dieter Weiss, in4ma

TTI Announces the Promotion of John Drabik to President Americas