Owing to soaring demands for various end devices, manufacturers have been ramping up their component procurement activities, and foundry capacities, as a result, have been in shortage since 2020, with various foundries raising their wafer prices and adjusting their product mixes to ensure profitability, according to TrendForce’s latest investigations. Despite the result for 4Q20 being a high base for revenue comparison and power outage incidents at some fab sites, the quarterly total revenue of the top 10 foundries rose by 1% QoQ to a record high of US$22.75 billion in 1Q21.

Samsung and GlobalFoundries posted a revenue drop for 1Q21 due to power outage and fab sales, respectively

The ranking of foundries by revenue for 1Q21 shows that TSMC maintained its first place position with a quarterly revenue of US$12.9 billion, a 2% increase QoQ. TSMC’s main revenue drivers have been its 7nm and 16/12nm nodes. The revenue from the 7nm foundry service has kept climbing at a stable pace thanks to orders from AMD, MediaTek, and Qualcomm, registering a QoQ increase of 23% for 1Q21. The revenue from the 16/12nm foundry service has also grown on account of the demand related to MediaTek’s 5G RF transceivers and Bitmain’s cryptocurrency mining machines, registering a QoQ increase of nearly 10% for 1Q21. The revenue produced by the 5nm node, which is currently under the market spotlight, underwent a quarterly decrease mainly because Apple as the largest client for the 5nm foundry service entered the off-season for device production.

Samsung posted a small QoQ drop of 2% in its foundry revenue for 1Q21 to US$4.11 billion. This February, a freak winter storm in Texas caused power outages in Austin and forced Samsung to temporarily shut down its fab Line S2 that was located in the vicinity. Line S2 finally returned to normal operation at the start of April. The suspension of wafer input at the fab for almost a whole month caused Samsung to become one of the very few foundries that posted a revenue drop for 1Q21. UMC maintained a fully loaded capacity in 1Q21 thanks to the robust demand for PMICs, TDDI, OLED DDIs, CIS, and Wi-Fi SoCs. Its shipments were also fairly brisk. Owing to the undersupply situation, UMC raised prices, thereby causing its revenue to jump 5% QoQ to US$1.68 billion for 1Q21.

GlobalFoundries posted a QoQ drop of 16% in its revenue to US$1.3 billion for 1Q21. As GlobalFoundries had formally handed over its Fab3E (an 8-inch wafer fab) in Singapore to VIS, Fab3E stopped generating revenue for GlobalFoundries with respect to fulfilling the orders related to last time buy or backlog in 1Q21. Hence, GlobalFoundries became another one of the very few foundries that posted a drop in revenue for 1Q21. SMIC raised its revenue by 12% to US$1.1 billion for 1Q21. The growth was mainly attributed to the substantial increase in wafer input at the foundry from Qualcomm and MPS. Specifically, there was strong demand for PMICs made with the foundry’s 0.15/0.18µm nodes and for RF chips, MCUs, and Wi-Fi chips made with the foundry’s 40nm node. The wafer input also rose noticeably for DDIs made with SMIC’s 40/28nm HV process technology. At the moment, SMIC has been operating normally as before in all respects because it had built a very high level of inventory for production-related materials and equipment parts before it was placed on the Entity List last year.

Owing to rising ASP and high demand for PSMC’s 12-inch wafer foundry service from clients that input wafers for specialty DRAM, DDIs, CIS, and PMICs, PSMC’s revenue for 1Q21 rose by 14% QoQ to US$388 million, surpassing Tower for the first time. As for Tower, its performance in 1Q21 was relatively on par with the result for 4Q20, registering a QoQ increase of about 1% to US$347 million. The main and stable demand drivers for Tower have been products made with the RF-SOI process, semiconductor components for industrial applications, and PMICs for automotive applications. Tower plans to invest an extra US$150 million this year to expand its production capacity by a marginal amount, and the newly added capacity is expected to be activated in 2H21. VIS posted revenue growth for 1Q21 owing to the recovering demand for large-size DDIs, PMICs, and automotive chips. It also benefited from the rising ASP. Its revenue grew by 7% QoQ to US$327 million.

HHGrace raised its revenue by 9% QoQ to US$305 million for 1Q21. The gain was mainly attributed to the rising demand from clients that supply NOR Flash, CIS, MCUs, and IGBTs. The 8-inch wafer production capacity of the foundry is fully loaded on account of stable demand. While capacity expansion of HHGrace’s 12-inch wafer fab has been taking place ahead of schedule, the capacity utilization rate of HHGrace’s 12-inch wafer fab in Wuxi is also rising rapidly as the fab is successfully proceeding with the mass production of specialty ICs and other products. HLMC’s revenue fell by 2% QoQ to nearly US$300 million for 1Q21. On the technology front, HLMC is now developing its 14nm node, but the process is still in the quality acceptance phase. The foundry still mainly generates revenue with its 65/55nm nodes.

It should be noted that HHGrace and HLMC, which came to 9th and 10th respectively in the ranking for 1Q21, belong to Hua Hong Group. If the revenues of the two companies are combined together, then Hua Hong Group would have produced around US$600 million in foundry revenue for 1Q21, giving it 6th place in the ranking. If Hua Hong Group is listed in the ranking, then DBHitek would fill in the 10th place. DBHitek’s 8-inch wafer foundry business has benefited from the stable demand for PMICs, MEMS, and CIS. Its wafer ASP has also risen slightly. For 1Q21, DBHitek posted a QoQ growth of 7% in its revenue to US$219 million. The foundry currently has no plan to further expand its already fully-loaded production capacity, so its future revenue growth will be limited as it will be mainly driven by the rise in the ASP.

With foundry capacity shortage expected for 2Q21, TrendForce believes the rise in wafer prices will in turn further contribute to revenue growth. This is attributed to the fact that, while foundries have not been undertaking significant capacity expansions during 1H21, there has been strong demand for most types of components in 2Q21, meaning foundries will maintain fully loaded capacities going forward. On the other hand, governments of some countries have directly requested foundries to prioritize automotive chips in scheduling production. This will further tighten the foundry capacity allocated to chips belonging to other, non-automotive applications. On the whole, TrendForce expects the quarterly total revenue of the top 10 foundries to once again reach a historical high by undergoing a 1-3% increase QoQ in 2Q21. 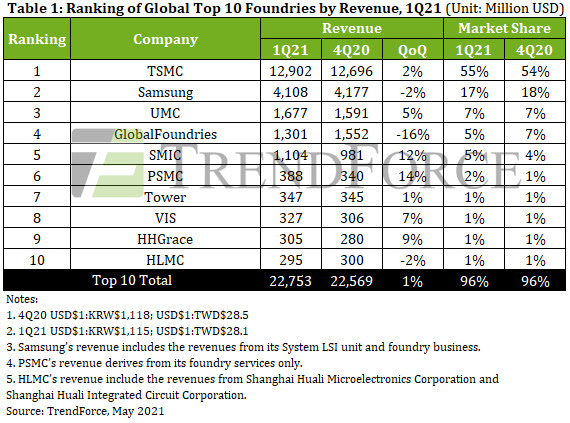