The latest PMI surveys indicate that the UK economy stalled at the start of the year as intensifying Brexit worries led to an increasingly broad-based malaise. The survey results indicate that companies have become increasingly risk averse and eager to reduce overheads in the face of weakened customer demand and rising political uncertainty.

Such a subdued start to the year, combined with worrying signs of global economic weakness, suggest economic forecasts for growth in 2019 are likely to be revised lower. 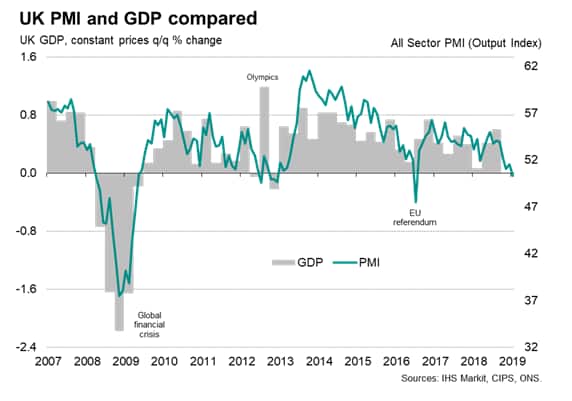 Service sector growth ground almost to a halt in January, matching similar disappointing news in the manufacturing and construction sectors. The triple-whammy of weaker surveys pushed the IHS Markit/CIPS ‘all-sector’ PMI down to 50.3 in January from 51.5 in December. The latest reading is the lowest since December 2012 with the sole exception of July 2016, when the economy stumbled momentarily after the Brexit vote.

The further deterioration in January from already subdued growth at the end of last year means the past three months have seen the economy slip into its weakest spell for six years. Comparisons of the PMI with official data indicate that GDP likely stagnated at the start of 2019 after eking out modest growth of just 0.1% in the fourth quarter.

Other survey indicators added to the gloomier picture. Inflows of new business likewise fell for only the second time since 2012, July 2016 having seen the only other decline in the past six years.

Backlogs of work also declined as a consequence of the reduced influx of new work, down for a fourth successive month and deteriorating at one of the steepest rates since 2012.

Firms responded to the worsening order book situation by cutting headcounts in January for the first time since July 2016. Although modest, the drop in payroll numbers was the steepest since November 2012.

Service sector growth was notably weak. Activity rose by the smallest of margins in January as the index slipped to a two-and-a-half year low of 50.1. With the exception of July 2016, service providers suffered the quickest drop in new business since April 2009. Manufacturing output meanwhile likewise rose at the weakest rate since the EU referendum and construction output grew at its slowest pace since the snow-related disruptions of early-2018. Both sectors also saw growth of new work deteriorate. 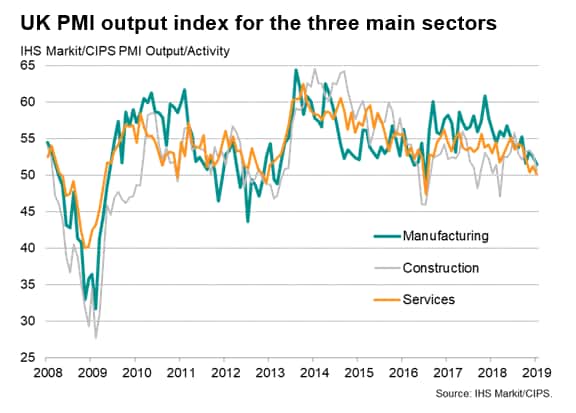 Looking at the impact on GDP, at current levels the PMI output indices are indicative of the comparable official growth rates for manufacturing and construction slipping into contraction while the service sector stagnated, based on quarterly rates of change.

Business sentiment about prospects for the year ahead meanwhile held steady, though December’s reading had been the third-lowest since comparable data were first available in 2012 (measured across all three sectors). Only November 2018 and July 2016 saw darker business moods. Business confidence is currently running at levels that have historically presaged an economic downturn.

The survey results indicate that companies have become increasingly risk averse and eager to reduce overheads in the face of weakened customer demand and rising political uncertainty. Such worries were in turn most commonly linked to heightened Brexit anxiety, though wider global political and economic factors were also reported to have taken their toll on demand, especially fears of a European economic slowdown. 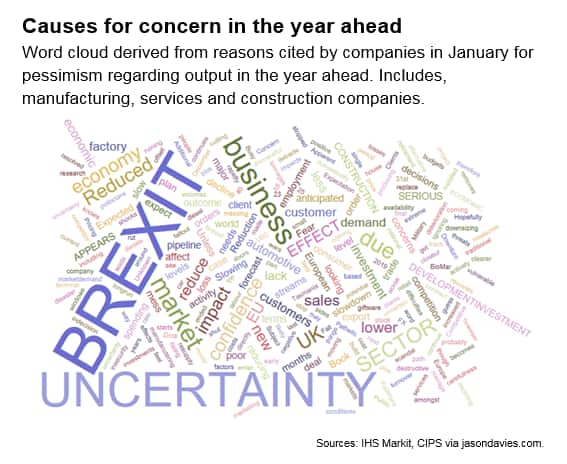 The surveys also recorded heightened activity in preparation for a possible disruptive Brexit. Manufacturers reported the largest rise in stocks of inputs in the 27-year history of the survey as firms safeguarded against potential supply chain delays.

Some evidence was also seen in the construction and service sectors as companies reported the need to complete projects or source materials ahead of the UK’s departure from the EU.

Input prices meanwhile rose at a rate unchanged on December’s eight-month low, albeit still continuing to rise at a solid rate. Companies often reported higher costs to have emanated from the weak pound as well as higher wages, albeit with lower oil prices helping to alleviate some of these upward pressures. The rate of increase of average selling prices for goods and services meanwhile fell to the lowest since last May, easing as companies often struggled to pass higher costs on to customers.

Forecasts to be revised lower

With the surveys indicating a stalling of the economy in January, and forward-looking indicators such as new orders continuing to deteriorate, there is a heightened risk of the economy stagnating or even contracting in the first quarter, especially if Brexit uncertainty intensifies in the lead-up to 29th March.

Such a subdued start to the year casts doubt on the ability of the economy to expand in 2019 by the 1.5% indicated by current CONSENSUS FORECASTS, the achievement of which would require a strong surge in the economy in future quarters. Given the increasingly sombre-looking assessment of the global economy, which surveys reveal to be expanding at the slowest rate of over two years at the end of 2018, such a growth spurt may prove difficult to achieve even in the event of a smooth Brexit.

The decline in January also takes the headline PMI deeper into territory that would normally have triggered a cut in interest rates or other stimulus from the Bank of England, suggesting that policymakers are likely to recognise increased downside risks to the economy during the February policy meeting. 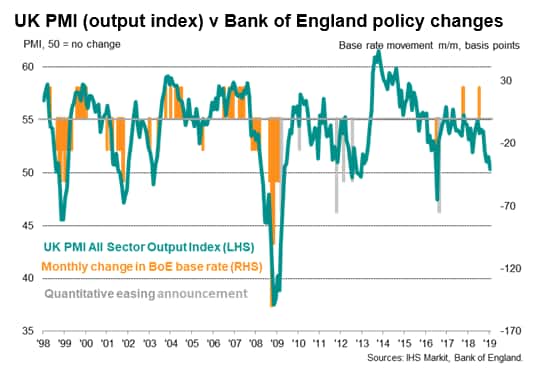 How to Retain Millennials? Give Them a Management Title, says Visier study

USTR Issues Fact Sheet on Impact of USMCA for Manufacturing