Japanese economic growth rebounded in the second quarter, allying fears of a bout of renewed economic malaise that had been fueled by a drop in GDP at the start of the year. The fresh data corroborate PMI surveys which had already been correctly indicating that the economy was faring well.

Reassuringly, the survey data show that the economy continued to grow at the start of the third quarter, albeit with some signs of momentum waning due to a sluggish export performance. 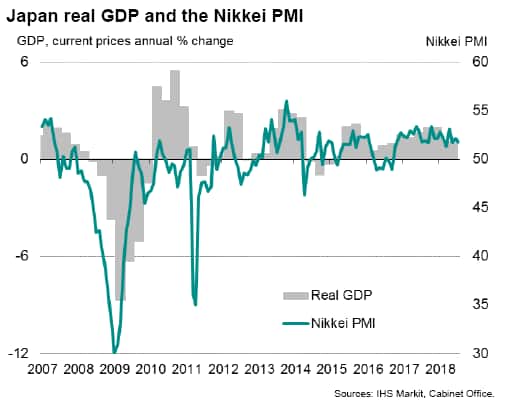 Accurately predicting Japanese GDP data is extremely difficult, more so than perhaps for any other major economy. Problems arise not because it’s hard to know how the economy’s performing, but because the initial estimates of the official data are notoriously unreliable, being prone to major revisions after initial estimates are first published.

For example, annual fourth quarter 2017 GDP growth has been revised up from a preliminary reading of 0.5% to 2.0%.

As noted in a recent paper by Nobuo Iizuka of Kanagawa University on revisions to Japan’s GDP between 2002 and 2015, “the average of the absolute value of the revision range is 0.8 points on an annual basis. This is not a small revision range for the Japanese economy which suffers from a low growth rate around less than 1%”.

There are also long-standing issues with the quality of the revised data. For example, Bank of Japan research questions the weakness of the GDP data in 2014, finding that tax revenue data are consistent with an economy that performed much better than the official economic growth estimates.

For investors seeking reliable up to date indications of the health of the economy, the PMI survey data, produced by IHS Markit on behalf of Nikkei, have provided valuable timely insights into the economy’s performance and help to identify anomalies in the official GDP data.

We use three recent examples to highlight the value of the Nikkei PMI for tracking Japanese economic growth:

Over the past decade (for which PMI data for the service sector have also been available to complement the longer-running manufacturing PMI numbers), the surveys have exhibited a 73% correlation with GDP, acting with a 2-3 month lead on the official real GDP annual growth rate numbers in addition to simply being published earlier. The correlation rises to 78% in predicting nominal GDP growth rates in advance. 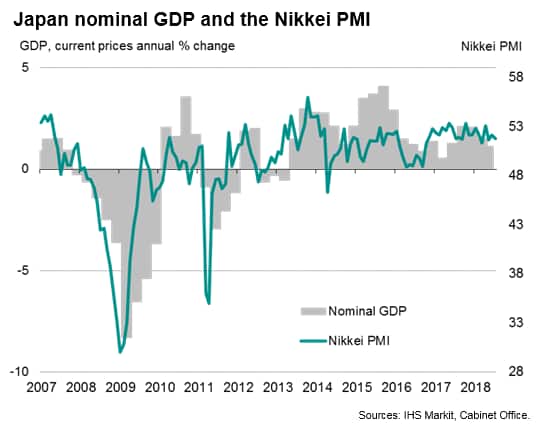 The faster updating of the monthly PMI data mean that we already have an indication of how the Japanese economy started the third quarter. The Nikkei Composite PMI Output Index dipped from 52.1 in June to 51.8 in July, representing the third-slowest rate of growth of business activity seen over the past ten months, and below the second quarter average of 52.3.