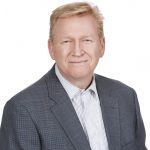 The results of the April 2022 Electronic Component Sales Trend Survey (ECST) delivered encouraging strength in the results for April. However, survey participants are clearly cautious in their expectations for May. Overall sales sentiment for April beat expectations by over 13 points as the index measurement grew from 113.6 to 119.6.  Survey participants still expect growth in May but soften their expectations in the index to 111.5, a drop of 8.1 points and the lowest level since the November 2021 results. After a period of dramatic swings in the index it has settled into a relatively stable range between 111 and 130 for overall sentiment over the past ten months with an average of 120.0. As an added positive observation, the last time the index measured below 100 was July 2020. The market has seen nearly two years of positive momentum. Looking forward, the electronic component markets continue to face strong headwinds. Hopefully, the market will demonstrate continued resilience and relative stability in an increasingly unstable environment. 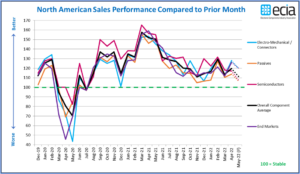 Electro-Mechanical components saw a significant swing in sentiment once again in April. Following its drop of 16.8 points in March it rebounded by 15.8 points in April. By contrast, Passive components sentiment  recovered just slightly, up 3.4 points, and Semiconductors saw a slight 1.1 point dip in April following its steep March decline. Expectations for May show a similar weakening trend across all three  major categories with index measurements dropping between 7.0 and 9.4. The strongest improvement in the index in April was seen in Electro-Mechanical, Connectors and Capacitors. By contrast every semiconductor subcategory saw a decline in April with the exception of MCU/MPU. Looking forward to May, with the exception of Memory, the sentiment in every subcategory falls between 4 and 11 points.  Expectations for Memory are flat month-to-month. In spite of the broad-based expectations for a drop in sentiment in May, none of the component subcategories is projected to fall below 100 – the threshold between assessment/expectation of growth or decline.

The overall end-market index continues its general alignment with the direction of the component index for April and May. The strongest sentiment measurements for April and May are found in the Avionics/Military/Space and Industrial markets. By contrast, the index measurements for Computers and Telecom Mobile Phones continued to anguish below 100 in April. Mobile Phones have registered sentiment below 100 for 7 of the past 10 months. Consumer Electronics recovered just above 100 in April. Looking forward to May, only Computers register sentiment below 100 as Mobile Phones improve above 100. Automotive Electronics joins Avionics/Military/Space and Industrial markets with the strongest expectations for May. While the overall index measures for components and end-markets continue their alignment in April and May, the end-market index scores have moved to a notably higher level than the component index for both months.

The positive component sales sentiment index continues its streak as it extends to 21 straight months. It has now registered above 100 every month dating back to August 2020. The major gap in sentiment scores that opened up in March between the assessment of Manufacturers and Distributors and the assessments of Manufacturer Representatives continues in April and May. As a group, Manufacturer Representatives are relatively pessimistic compared to the other groups. Between March and May, the Manufacturer Representative sentiment typically scores below 100 for the component subcategories.   Their scores range between 67 and 113 in April and between 84 and 113 in May. Distributors are the most optimistic with the lowest component subcategory scores between March and May of 109. Distributor scores reach all the way to 160 on the high side during these months. This continued divergence between Manufacturer Representatives and the other groups beginning in March is notable. Concerns regarding a potential recession are now adding to other major impacts being felt by supply chain participants such as the war on Ukraine by Russia and the upward trend in the inflation measurements. These external pressures are likely significant contributors to the more conservative sales expectations looking forward.

Concerns related to the economy continue to grow as inflationary pressures continue to increase and consumer confidence takes a strong hit. The talk of shortages in even the food supply with potential famine in some areas of the world opens up a much greater level of concern about global health – not just economically but physically and emotionally. These forces weigh heavily and will be difficult to overcome. While recognized sales for 2022 should be solid with order books full, it will be important to keep an eye on orders in the longer term. With no end in sight to elevated supply chain challenges, manufacturers and retailers continue to face an extremely risky and uncertain future. Common projections for resolving the major supply chain challenges still stretch out into early to mid-2023. 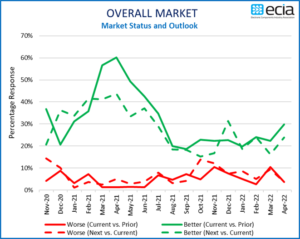 The latest ECST survey results point to possible lead time relief after actual reported lead times jumped back up again in March.  The April ECST survey reports a substantial decline in expectations for increasing lead times between March and April. Passive components show the greatest optimism for less pressure on lead times while Semiconductors report the greatest pressure. However, all three component categories show major improvement in expectations. This is a return to the more hopeful lead time sentiment seen in recent surveys. 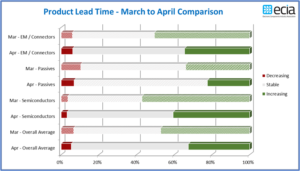 The ECST survey provides highly valuable and detailed visibility on industry expectations in the near-term through the monthly and quarterly surveys. This “immediate” perspective is helpful to participants up and down the electronics components supply chain. In the long-term, ECIA shares in the optimism for the future as the continued introduction and market adoption of exciting innovative technologies should motivate both corporate and consumer demand for next-generation products over a growth cycle that still appears to have legs to go an extended distance.

The complete ECIA Electronic Component Sales Trends (ECST) Report is delivered to all ECIA members as well as others who participate in the survey. All participants in the electronics component supply chain are invited and encouraged to participate in the report so they can see the highly valuable insights provided by the ECST report. The return on a small investment of time is enormous!