New Energy Vehicle Sales Grow Against Headwinds by 19.8% in 2020, with Significant Growth Expected for 2021, Says TrendForce

Thanks to subsidies by various governments worldwide, the New Energy Vehicle market, including BEVs and PHEVs, maintained a positive growth in sales performance despite the major downturn experienced by the overall automotive market, according to TrendForce’s latest investigations. Total New Energy Vehicle sales for 2020 are expected to reach 2.4 million units, a 19.8% increase YoY.

TrendForce analyst Caroline Chen indicates that governmental subsidies have been the primary driver for the growth of New Energy Vehicles in 2020, as China, Germany, the UK, and France authorized subsidies for automotive purchases in an attempt to stimulate their domestic economies. These subsidies for the most part pertained to environmentally friendly New Energy Vehicles, with BEVs yielding the highest subsidies. As governments successively withdraw subsidies each year, rising subsidies have thus become a significant attraction for consumers, especially in certain countries where governments provide enough subsidies to cover the difference in price between EVs and gasoline vehicles.

With regards to regional markets, most of the upwards momentum for New Energy Vehicles stems from Europe. More specifically, the New Energy Vehicles markets in Germany, the UK, and France are expected to collectively reach sales of about 630,000 units in 2020, a 163% increase YoY, while the Chinese market may potentially see its sales performance substantially recovering at the end of the year, with total yearly sales in China reaching a 6% increase YoY.

Region-wise, China and Europe are expected to maintain their status as the primary drivers of New Energy Vehicles sales in 2021. The former has instituted various policies to stimulate both EV sales and charging station build-out. In particular, Shanghai has issued extremely strict restrictions against cars with out-of-town license plates. However, the city has also given special permit for cars with New Energy Vehicle license plates to be exempt from the restrictions. Shanghai’s policy is one example out of many other policies by China to stimulate New Energy Vehicle sales on a large scale via localized actions. As such, the growth of China’s New Energy Vehicle sales is expected to once again exceed the global average in 2021.

On the other hand, governmental subsidies for New Energy Vehicles in the European market, which is the other market aside from China driving up the overall penetration rate of New Energy Vehicles, are likely to last throughout 2021. This, in addition to the 100% implementation of the new CO2 emission standards stipulating that automakers that fail to meet said standards will be penalized at a significant fine, will propel the development of the New Energy Vehicle market in Europe. In reality, several automakers have purchased carbon emission credits from New Energy Vehicle manufacturers such as Tesla in order to steer clear of carbon emission penalty fines, although this strategy is not sustainable in the long run. In any case, by the end of 2020, the European New Energy Vehicle market will have seen the announcement and release of multiple models, and automakers will make an even more aggressive attempt to saturate the market. For the consumer, the proliferation of New Energy Vehicles means that consumers are no longer faced with the lopsided choice between disproportionately few EV models and the vast ocean of conventional gasoline vehicles. Instead, consumers will be able to choose from a wide variety of EV models within the same price segments going forward.

In terms of the overall EVs market, Tesla took leadership positions in nearly all regional markets by sales in 2020. The industry will likely experience substantial growth in 2021 owing to the release of EV models by various mainstream automakers, as well as the delivery of Model Y vehicles from Tesla’s Shanghai Gigafactory. Global sales for 2021 are expected to reach 3.4 million units, a 39.7% increase YoY and a return to accelerated growth. On the other hand, the rapid growth of the New Energy Vehicle market will also provide growth opportunities for the various supply chains of EV components and charging station components. 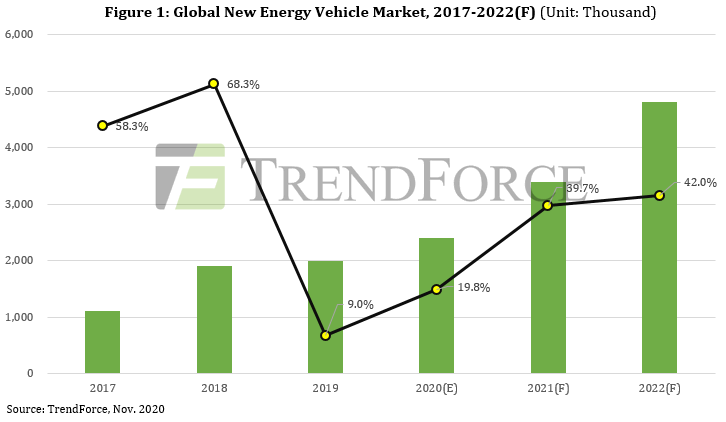 IHS Markit Mexico Manufacturing PMI Rises to 49.3 in October, from 48.6

The Great Resignation and the Microelectronics Industry: Retaining a Skilled Workforce

India PC Market Shipped a Record 14.8 Million Units in 2021, According to IDC