NAND Flash demand continues to rise as strong sales of notebook (laptop) computers spur PC OEMs to place additional orders for client SSDs, according to TrendForce’s latest investigations. Also, the supply-side inventory for NAND Flash memory has already fallen considerably due to the aggressive stock-up activities of some smartphone brands. With customers in the data center segment expected to ramp up procurement in 2Q21, NAND Flash suppliers have decided to scale back the supply of NAND Flash wafers. Compared with other product categories, wafers have a lower gross margin. As a result of these factors, the decline in contract prices of wafers has been easing over the past two months (i.e., from December of last year to January of this year).

TrendForce indicates that the migration to the 1XX-L processes has not been proceeding as smoothly and rapidly as expected for notebook SSDs during 1Q21. The testing and approval of 1XX-L products by PC OEMs has actually fallen behind schedule, so the bulk of demand is staying with the 92/96L processes rather than shifting toward the more advanced stacking processes. At the same time, customers in other application segments are still focusing their demand on the 92/96L processes as well as the 64L processes. Consequently, the NAND Flash market is now seeing a general tightening of supply. Wafers are the first to be affected by this turn of events since this product category is low on priority for suppliers. As suppliers curb the quantity of wafers in order to meet the growing demand from other applications, contract prices of wafers are starting to display a more stable trend. In fact, some suppliers are raising quotes for wafers this February. Based on this latest development, TrendForce has revised its projection of wafer prices for 1Q21. The previous projection predicted a QoQ decline of 10-15%, whereas the latest projection indicates that prices will hold relatively steady from 4Q20.

Looking ahead to 2Q21, customers in the data center and server segments are expected to generate a stronger procurement momentum. NAND Flash suppliers will therefore concentrate on meeting the demand for enterprise SSDs and pay less attention to the wafer segment. However, the volume of orders from module houses will be somewhat muted due to the influence of the ongoing shortage and price hike for NAND Flash controller ICs. As both supply and demand become weakened, NAND Flash wafer prices are thereby expected to remain mostly flat for 2Q21.

ICs in the upstream supply chain, however, remain in severe shortage. As such, even though NAND Flash suppliers have been putting forth a full effort to fulfill the demand for client SSDs, they will still have to beware of the possibility that actual notebook shipment may fall short of expectations due to an uneven distribution in the supply of raw materials. Furthermore, should the pandemic become gradually alleviated in 2H21, the global notebook demand may begin approaching pre-pandemic levels, in turn leading PC OEMs to revise their business plans accordingly. TrendForce therefore believes that uncertainties will still exist in the NAND Flash market in 2H21. 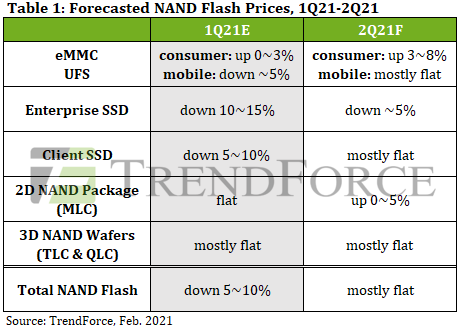