According to the latest investigations by the DRAMeXchange research division of TrendForce, NAND Flash bit shipment in 1Q20 was relatively on par with 4Q19. The overall ASP of NAND Flash products also climbed during the period. As a result, the global NAND Flash revenue for the quarter went up by 8.3% QoQ to US$13.6 billion.

In 1Q20, demand for enterprise SSDs exceeded supply because cloud service providers’ procurement for data centers had been growing progressively since 4Q19. Also, inventories of NAND Flash suppliers mostly returned to normal during the period. Consequently, most NAND Flash products for the major applications experienced a rise in contract prices. As for the impact of COVID-19 during the Lunar New Year, TrendForce’s investigations at the time found that the server supply chain managed to make a better recovery than the supply chains for notebook computers and smartphones. The impact of the outbreak on the storage demand from the cloud services sector was thus quite limited. On the other hand, the production of notebooks and smartphones was affected by logistical problems and breakage in the component supply chain. Because of this, notebook and smartphone manufacturers have gradually resumed production since March.

Looking toward 2Q20, applications such as remote service and video streaming will continue to generate a need for cloud services, while there is a drastic increase of notebook demand, reflected in large-scale enterprise purchases and government bids, caused by the sudden rise of WFH and distance education. Therefore, the majority of NAND Flash demand in 2Q20 will come from tablets, notebooks, and enterprise SSDs. Driven by the strong demand for these applications, the corresponding shortage in the NAND Flash market will in turn lead to rising NAND Flash contract prices in 2Q20. With the continuing rise in both demand and prices, TrendForce expects NAND Flash suppliers to further increase their revenues.

During the onset of COVID-19, Samsung registered lower than expected client SSD shipment because the outbreak kept ODMs from immediately resuming normal operations after the Lunar New Year holiday. In addition, shipments of mobile memory/storage solutions also slowed down in the traditional off-season. However, these two factors were offset by the strong demand for enterprise SSDs from the cloud services sector; in 1Q20, Samsung’s bit shipment dropped by about 3% QoQ whereas its ASP rose by about 4% QoQ. The company’s NAND Flash revenue for the quarter was relatively on par with the result of the previous quarter, coming to a total of $4.501 billion.

As for technology migration, Samsung is now raising the allocation of 92L NAND production in its output and plans to introduce 128L process technology into different storage applications within this year. The deployment of the more advanced process will help Samsung retain its cost competitiveness and effectively respond to the market’s demand for higher density products.

SK Hynix will be concentrating on improving its process technology this year. Aside from increasing the allocation of its 96L products, the company is also expected to begin mass producing 128L products in 2Q20.

Kioxia’s bit shipment rose by about 3% QoQ in 1Q20 due to the strong demand for SSDs driven by cloud service providers and notebook manufacturers. Its ASP also jumped about 6% QoQ in 1Q20 because of Kioxia’s effective adjustment of its product mix and the fact that the NAND Flash market was still in undersupply during the period. Kioxia’s 1Q20 revenue climbed 9.7% QoQ to $2.567 billion.

Kioxia is expected to significantly raise the allocation of SSDs in its product mix this year. Major sources of demand for its SSDs will come from servers, notebooks, and the next-generation game consoles to be released at the end of the year. On the subject of technology, Kioxia is expected to rely mostly on its 96L process for meeting the aforementioned SSD demand this year.

WDC benefitted from the demand generated by the cloud services sector in 1Q20 and posted a QoQ growth of about 7% in its bit shipments for the quarter, while its ASP increased by about 5% due to the overall shortage in the NAND Flash market. WDC’s 1Q20 NAND Flash revenue reached $2.061 billion, a 12.1% increase QoQ.

In terms of product development, WDC’s focus for 2020 is on increasing the allocation of 96L products in sales of client and enterprise SSDs, as the demand for these products will be higher compared with other NAND Flash applications.

Like other NAND Flash suppliers, Micron benefitted from the robust demand from the cloud services sector and registered a revenue growth of nearly 20% QoQ. Micron was able to raise its profitability by reducing the allocation of channel market wafers in its shipment of NAND Flash products. Despite a slight drop in bit shipment, Micron’s ASP increased by about 10% QoQ. The company’s NAND Flash revenue reached $1.514 billion in 1Q20, a 6.47% increase QoQ.

Regarding its product mix strategy, Micron continues to concentrate on SSDs and has been aggressively promoting its client SSDs to PC OEMs since 2H19. On the technology front, Micron plans to switch to Replacement Gate this year, with the initial application of this technology targeting its 128L products.

Due to its long-established presence in the enterprise SSD market, Intel was swamped with orders related to recent procurement from the cloud services sector. This development, together with the recent modification of its product mix, contributed to a large QoQ hike of 20% in its ASP in 1Q20. However, Intel also posted a QoQ decrease of nearly 10% in bit shipment because it has not been raising production capacity and lacks the additional inventory to meet urgent or upside demand. Intel’s 1Q20 NAND Flash revenue reached $1.338 billion, a 9.9% increase QoQ.

Turning to product development and technology migration, the main focus of Intel’s sales strategy will still be its lineup of enterprise SSDs. The company will primarily aim to transition its clients to 96L products in 2020 and send out samples of 144L products by the end of the year, with increased shipment volume expected in 2021. In addition, Intel’s QLC products accounted for more than 5% allocation of its NAND Flash bit shipments in 1Q20. As such, the company is expected to actively continue its QLC product development this year. 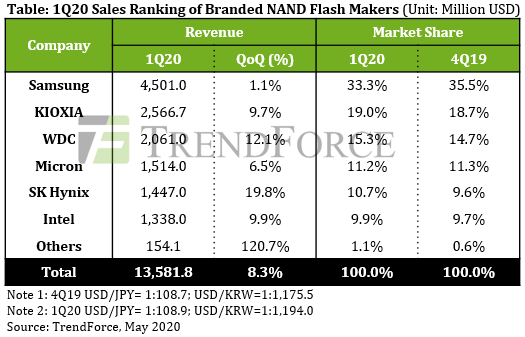 Germany has the first hydrogen-powered trains in the world

IT Spending Forecast Hit by Coronavirus Impact and Downside Risks Continue to Escalate, According to Updated IDC Black Book Forecast