Abu Dhabi, United Arab Emirates – Hydrogen produced with renewable electricity could compete on costs with fossil fuel alternatives by 2030, according to a new report from the International Renewable Energy Agency (IRENA) published today. A combination of falling costs for solar and wind power, improved performance as well as economies of scale for electrolysers could make it possible. ‘Green Hydrogen Cost Reduction: Scaling up Electrolysers to Meet the 1.5⁰C Climate Goal’ looks at drivers for innovation and presents strategies that governments can peruse to reduce the cost of electrolysers by 40% in the short term and by up to 80% in the long term.

Green hydrogen could play a critical role in decarbonisation strategies, particularly so where direct electrification is challenging in harder-to-abate sectors, such as steel, chemicals, long-haul transport, shipping and aviation. However, regulations, market design and the costs of power and electrolyser production are still major barrier to the uptake of green hydrogen.

“Renewable hydrogen can be a game-changer in global efforts to decarbonise our economies”, said Francesco La Camera, Director-General of IRENA. “Levelling the playing field to close the cost gap between fossil fuels and green hydrogen is necessary. Cost-competitive green hydrogen can help us build a resilient energy system that thrives on modern technologies and embraces innovative solutions fit for the 21st century.”

Today, green hydrogen is 2-3 times more expensive than blue hydrogen, produced from fossil fuels in combination with carbon capture and storage (CCS). The production cost for green hydrogen is determined by the renewable electricity price, the investment cost of the electrolyser and its operating hours. Renewables have already become the cheapest source of power in many parts of the world, with auctions reaching record price-lows below USD 20 per megawatt-hour (MWh). While low-cost electricity is a necessary condition for competitive green hydrogen, investment costs for electrolysis facilities must fall significantly too.

IRENA’s new study identifies key strategies and policies to reduce costs for electrolysers through innovation and improved performance aiming to scale up electrolysers from today’s megawatt to multi-gigawatt (GW) levels. Standardisation and mass-manufacturing of the electrolyser stacks, efficiency in operation as well as the optimisation of material procurement and supply chains will be equally important to bring down costs. For that, today’s manufacturing capacity of less than 1 GW would have to massively grow beyond 100 GW in the next 10 to 15 years.

In the best-case scenario, using low-cost renewable electricity at USD 20 USD/MWh in large, cost-competitive electrolyser facilities could produce green hydrogen at a competitive cost with blue hydrogen already today. If rapid scale-up and aggressive electrolysers deployment take place in the next decade, green hydrogen could then start competing on costs with blue hydrogen by 2030 in many countries, making it cheaper than other low-carbon alternatives before 2040, IRENA’s analysis shows. 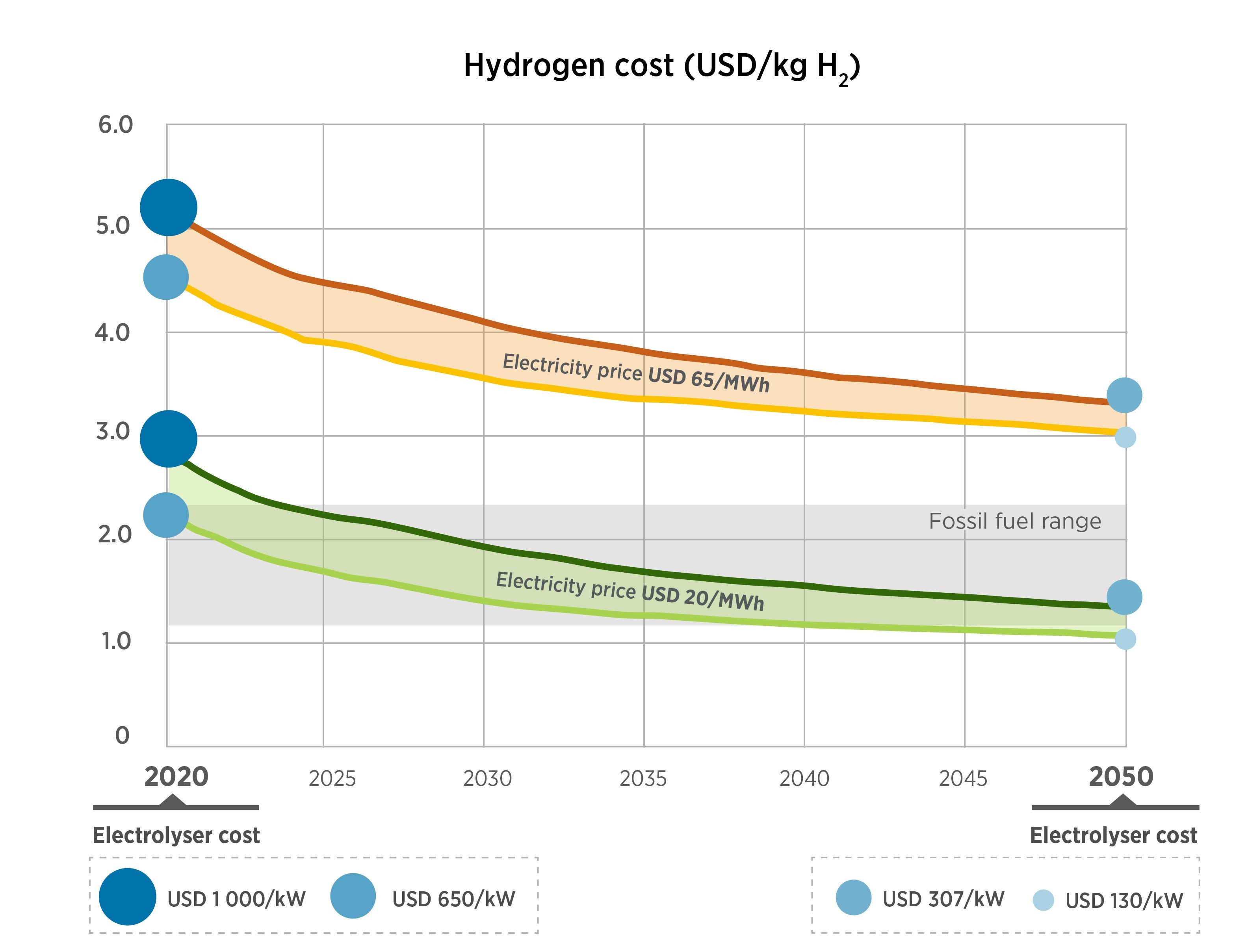 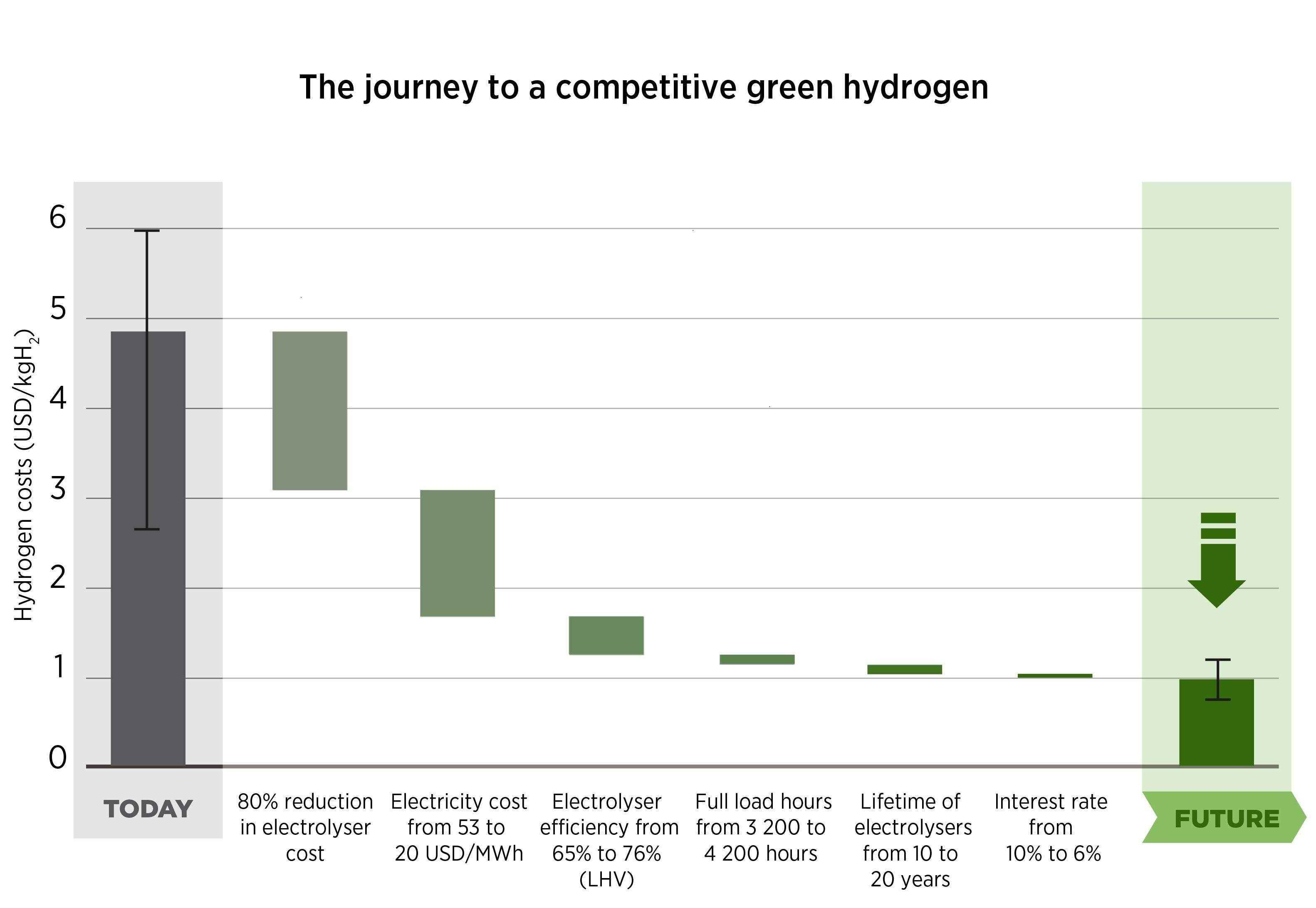 IRENA has also recently published “Green hydrogen: A guide to policy making” that outlines the main barriers inhibiting green hydrogen uptake and the policies needed to address these. It offers insights on how to kickstart the green hydrogen sector as a key enabler of the energy transition at the national or regional level.

Smartphone Shipments Decline for the Fourth Consecutive Quarter with 8.7% Drop in 2Q22 Shipments Amidst Global Uncertainty and Softening Demand, According to IDC