Abu Dhabi – A disruptive technology company has confirmed it has made a major breakthrough in its search to innovate a ground-breaking “clean gas” energy source that will not only provide an alternative supply to natural gas, but also boasts zero CO2 emissions and is estimated will be cheaper than current domestic household and business energy supplies by as much as 80%.

The clean gas, which is carbon neutral with net zero emissions, will give global economies access to a cheap, endless supply of clean energy. Importantly, it will allow countries to maintain security of their gas and energy supplies whilst also meeting their carbon-neutral net zero targets. This discovery could play a major role in reversing the global energy crisis, significantly reducing energy costs to the consumer and businesses sectors at a time when the cost-of-living crisis is worsening, and inflation has reached a 40-year high.

Code-named KINETIC 7™ , the scientific breakthrough is a clean gas energy source that is a stable and an efficient gas derived solely from water. Whilst creating a gas from water such as hydrogen is not new, KINETIC 7™ has a unique molecular chemistry that is way more advanced than hydrogen gas. For example, hydrogen gas is obtained through electrolysis, where pure distilled water (H2O) is broken down into (H2) and (O2) gases. Not only does this use a huge amount of energy to create the molecular process; it requires high pressure storage and has a low flash point, making it very unstable.

KINETIC 7™ patented technology reconstructs and converts water into molecular clusters, which are electrically charged to create a constant oxidisation and friction. This makes the molecules more efficient, causing them to vibrate, which in turn creates a very reactive gas, providing a clean gas and flame.

Unlike hydrogen gas KINETIC 7™ is also inert, making it a safe and controllable gas for domestic and industrial supply. Most importantly, the cost savings by using KINETIC 7™ will be substantial against current gas and energy costs. The KINETIC 7™ generators which create the clean gas, will be manufactured to high standards in Europe. The current process of making the gas is both EU-approved and CE-certified.

The KINETIC 7™ discovery, which has taken more than eight years of research and development, will not only enable countries and global economies to maintain their own gas independence and sovereignty, but will also ensure global energy security, with an unlimited supply of carbon neutral gas to both domestic and industrial customers.

It comes at a time of global instability in the energy markets, fuelled by the Russian invasion of Ukraine, which has sent gas prices soaring. EU energy ministers have also held talks over recent weeks to tackle the energy crisis that has been negatively impacting 218 million households throughout the bloc. Households in the UK faced a record energy bill spike of 54% at the beginning of April and prices are set to rise again in October. Many engineering, industrial and manufacturing businesses have also been severely impacted by the energy crisis. Soaring gas costs have led to partial factory shutdowns, reductions in production and output, all of which has impacted on the supply chain.

It follows an unprecedented demand for energy and a perfect storm of war in Ukraine, a post-pandemic recovery in manufacturing and industrial production, coupled with an unusual downturn in wind power supply to national grids.

Rick Parish, Founder and Executive Chairman of investment incubator Aquarius Global, which has funded the research and development of Voltage Enterprises, said:

“KINETIC 7™ represents more than eight years of scientific research, development and tech innovation by a dedicated team of scientists and tech disruptors, all working to produce a clean energy source that is carbon-neutral, significantly cheaper, stable and efficient – but disruptive in every sense to the status quo.

“KINETIC 7™ is a major gamechanger in the global energy market. Just as we saw with the oil boom, the technologies and science  that we are innovating, developing and disrupting in the energy sector through Voltage Enterprises are truly ground-breaking – a world first for the energy sector!”

Governments around the world are desperately considering other options of energy supply and security, including the highly controversial fracking for shale gas, which is not only hugely damaging to the environment and public health, but has also been known to cause earthquakes.  Other options include the importing of gas from Iran and the building of further nuclear reactors, both of which carry huge risks and have inherent downsides attached. These include the geopolitical sanctions on Iran, with the US oil and gas ban and the huge cost of building nuclear reactors. Sizewell C in the United Kingdom is estimated to cost UK taxpayers £20 billion with costs set to increase. Construction time to build a nuclear reactor takes on average 10 years, coupled with the safety concerns and health issues that have long plagued nuclear energy.

“In much the same way that solar power is currently being used in domestic housing, KINETIC 7™ will allow households to produce their own clean gas energy source, using water and a small amount of electricity. The cost to create the clean gas is minimal. The KINETIC 7™ generator unit will be retrofitted into homes. The plug-n-play product, which uses a small amount of AC or DC power and water, will allow the householder to enjoy the same natural gas/LPG benefits without the high costs, supply disruptions and dramatic price increases. An external wall unit can be fitted to a domestic household and used for stove cooktops and ovens, hot water systems, ambient heating and underfloor heating.”

KINETIC 7™ represents a significant breakthrough in providing an alternative and viable energy source of clean gas that has zero carbon emissions. KINETIC 7™ can then be utilised in three ways:

The KINETIC 7™ flame can be used for domestic energy supply in ambient heating, cooking and hot water heating.

KINETIC 7™ gas also has a major role to play in providing clean energy for industrial production. Large-scale manufacturing, engineering and industry are all hugely reliant on vast amounts of energy in their production and manufacturing processes. Food production, restaurants and hotels are also gas- and energy-intensive, and KINETIC 7™  can now provide a cleaner more efficient energy source that is carbon-neutral and significantly cheaper than existing natural gas supplies.

KINETIC 7™ can also be used as a clean energy gas source for heating and cooking from portable stoves in remote locations and developing countries which do not have access to gas or energy.

“With KINETIC 7™  we have the world’s first commercially viable clean gas energy source that can be used in domestic households. At the same time, KINETIC 7™ can power large-scale industrial production and manufacturing, providing clean energy that is carbon neutral from water. We anticipate KINETIC 7™ will be 80% cheaper than current energy supplies.

“This will not only help solve the global gas and energy crisis, but the innovation will allow countries and global economies to maintain stability in the energy sector, reduce costs and maintain security of supply.”

KINETIC 7™ will also bring efficient cooking and heating across Africa to developing nations, war-torn countries and places where poor infrastructure has inhibited or restricted access to clean energy. The company will be manufacturing miniaturised KINETIC 7™ portable cooking and heating stoves that will change the lives of millions for the better, providing low-cost energy and heat using clean or untreated water.

“As an investment incubator in disruptive industries, Aquarius Global has been supporting companies like Voltage Enterprises to work on a number of disruptive technologies and innovations in energy and healthcare. Our corporate objective is to support companies using science and technology in a disruptive manner, to develop and deliver beneficial innovations for mankind and the environment. We are currently working on ground-breaking projects to capture carbon emissions and reduce CO2, whilst also creating anti-microbial and immune-boosting water that can be used in a whole range of applications.

“The whole ethos of Voltage Enterprises is to innovate and disrupt using technology and science to change the lives of millions of people for the better, to arrest the environmental damage that has been caused by oil and gas exploration and leave a positive legacy for future generations.”

The founders of Voltage Enterprises both have a philanthropic desire to help change the world for the better. They will be donating 20% of their global profits from KINETIC 7™ to provide African nations and those in need with free clean energy.

A series of “real-world”  R&D trials are currently underway using KINETIC 7™ in residential properties for domestic cooking stoves, hot water systems and residential heating. A number of factories and engineering plants are also part of an R&D program to integrate the technology and use the clean gas in a number of commercial and industrial applications.

It is envisaged that after further R&D trials have been completed, a programme of rolling the technology and clean gas out into domestic households and commercial premises could feasibly start within 6-12 months’ time.  Voltage Enterprises has confirmed that it is around three months away from manufacturing the miniaturised portable cooking and heating stoves that it will be supplying to developing countries.

Further announcements are expected from the company over the coming months as it also looks for global energy partners to work with and assist in the rapid rollout and deployment of the clean gas technology. 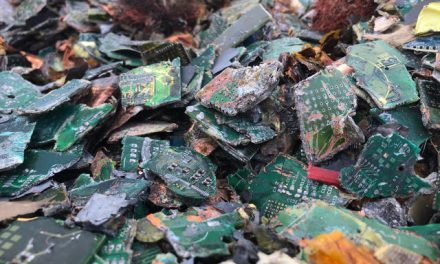 Managing and Reducing E-Waste from PCBs