JAKARTA, March 22, 2022 – Indonesia’s smartphone market is expected to reach 44 million units in 2022, growing by 8% year-over-year (YoY) as supplies improve. This comes after a strong rebound in 2021 with 40.9 million smartphones resulting in an 11% growth, according to the IDC Worldwide Quarterly Mobile Phone Tracker. The first half of 2021 recorded strong growth of 47% compared to 1H20 and 20% against 1H19, although the market slowed in 2H21.

2021 started with a bang as YoY growth reached double digits for the first half of the year. This was mainly due to the decreasing of COVID-19 cases and the preparation for Ramadhan. But it quickly came to a halt as the COVID-19 Delta wave came, forcing the government to apply restrictions that led to a retail shutdown in 3Q21. In the midst of that, supply continued to tighten. Shipments improved 10% QoQ in 4Q21 as the cases were contained, restrictions were lifted, and vendors released new products in tandem with the year-end double date promotions throughout the quarter. However, shipments were still lower than last year by 13%.

As we move into 2022, IDC expects smartphone supplies to improve gradually. Smartphone vendors are expected to start stocking up before the Ramadan festive period, and to prepare for changes in the Tingkat Komponen Dalam Negeri (TKDN) local content regulation, as well as tax increases in April 2022. “Vendors are largely ready for the increase in the local content requirement, but there are uncertainties regarding their higher-end portfolios which may be subject to a stricter set of rules. Channel players also may stock up before the tax rate is increased from the current 10% to 11%” says Vanessa Aurelia, Associate Market Analyst from IDC Indonesia. “The recent merger between Indosat Ooredoo and Hutchison 3 is expected to further accelerate the growth of 4G and 5G network in Indonesia”, Aurelia added. 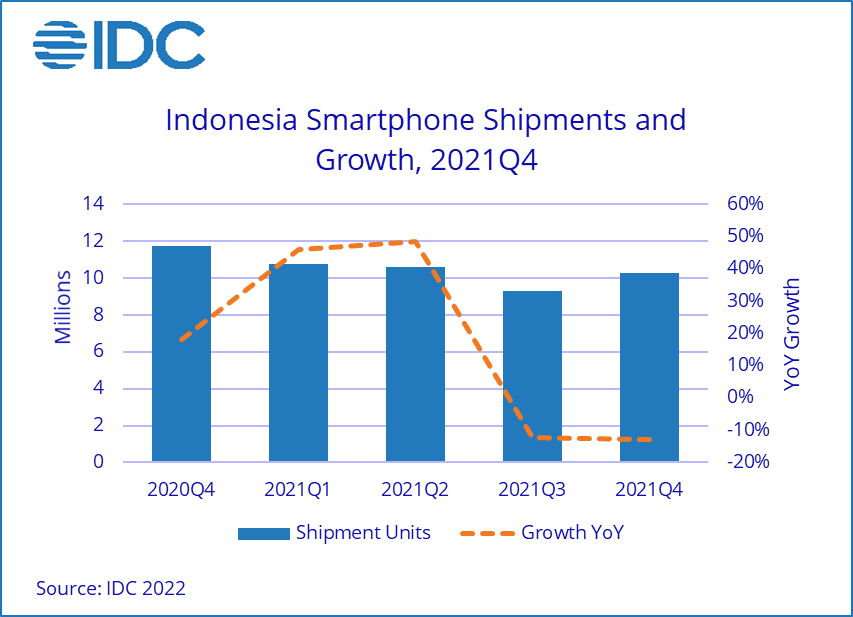 OPPO and vivo managed to defend the number one and two spots in 4Q21, continuing their streak from the previous quarter as both brands maintained their supply. Both brands also led the low-end and mid-range segments, which accounted for three-fourths of the Indonesian market in 4Q21. Samsung managed to recover from 3Q21, supported by its popular Galaxy A models, specifically the Galaxy A03 series and Galaxy A12.

OPPO emerged as the top player in 2021 after being displaced by vivo in the previous year. OPPO recorded a 3% YoY growth with a greater focus on the low-end segment (US$ 100 < US$ 200) in 2021. OPPO became the leader of the low-end segment with a 28% market share, compared to 24% a year ago. But OPPO had a lower share of 5G smartphones in its portfolio compared to the other top players in 2021, with most of its US$ 400+ smartphones being 5G enabled, but lesser in the lower price bands.

Xiaomi achieved the highest growth in 2021 amongst the Top 5 players, despite a steep drop in shipment in 2H21 due to supply constraints. The growth was aided by Xiaomi’s continuous offline expansion, along with increased shipments for its sub-brand POCO. The Redmi 9 series became the biggest contributor to Xiaomi’s full-year shipments. On top of that, Xiaomi managed to grow its mid-range (US$ 200 < US$ 400) portfolio significantly with the help of its Redmi Note 10 and POCO X3 series.

Samsung took fourth place in 2021 with YoY growth in all quarters of 2021 except in the third quarter. Samsung’s Galaxy Z Fold3 helped it to gain dominance in the ultra-premium (>US$1600) segment. The Galaxy A52s model also helped in strengthening Samsung’s position in the mid-to-high-end segment (US$ 400 < US$ 600).

realme managed to keep the 5th spot in 2021. The realme C11 (2021) was the top-selling model; it was a new version of the previous C11 but with a UNISOC processor amidst supply constraints. On top of fending off supply challenges, realme went through a channel transformation for more resilient operations as they also move towards diversifying their portfolio.

IFS Study: Servitization and Aftermarket Contracts Pay Off for Manufacturers