TrendForce indicates, the global power generation structure is still dominated by fossil energy at this stage but with the future advancement of net-zero carbon emission targets in various countries around the world, the proportion of renewable energy in the power system will grow further. In order to overcome the intermittency and volatility of wind and solar power inherent with large-scale access to new energy generation and electricity consumption, the entire power system will undergo a transition from “power source, grid, load” to “power source, grid, load, energy storage.” Energy storage will become the fourth basic element of a new power system and new energy storage technology will become a driving force for decarbonization.

Specifically, thanks to the rapid development of power batteries, the lithium-ion battery industrial chain has entered a mature stage of commercialization and its application in the field of energy storage is also mainstream in the electrochemical energy storage market, with a market share of more than 90%. However, due to constraints on lithium resources in recent years, the cost of using lithium-ion batteries has risen significantly. In terms of sodium-ion batteries, although industrial layout is still in its infancy, compared with high-priced lithium resources, the advantages of its abundant raw material resources will gradually surface in large-scale applications and is expected to complement lithium-ion batteries in the future. As for flow batteries, since this type of battery can better meet the long-term energy storage (energy storage duration ≥ 4h) needs of power systems, it will also usher in development opportunities in applications for large-capacity long-term energy storage in the future. Raw materials utilized in flow batteries such as all-vanadium and zinc-bromine are readily available and easy to recycle and have entered the stage of demonstration applications. 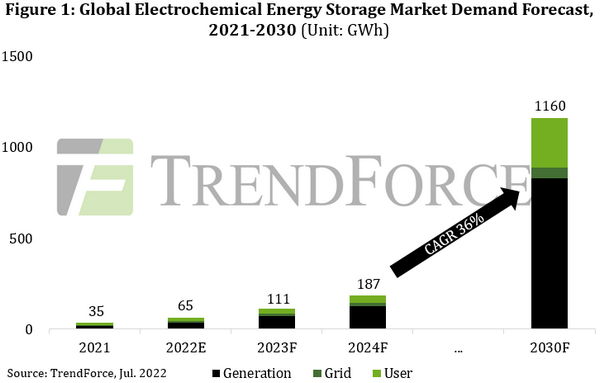 For more information on reports and market data from TrendForce’s Department of Green Energy Research, please click here, or email Ms. Grace Li from the Sales Department at graceli@trendforce.com

Plexus Announces Construction of a Manufacturing Facility in Bangkok, Thailand