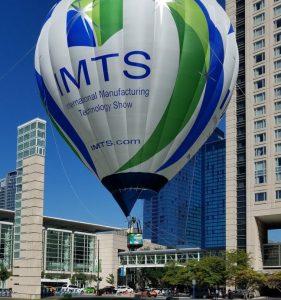 Yes, ‘Doers and Dreamers’ — that was the theme of this year’s International Manufacturing Technology Show  (IMTS) and there seemed to be plenty of both at McCormick place on a gorgeous early fall Wednesday in Chicago. EMSNow was there, along with 122,000 other local and international people learning about the latest products and processes for manufacturing.

We started the morning with a short speech from Illinois’ Governor Bruce Rauner, who is very bullish on Midwest industrial prospects. He pointed out that Illinois has what manufacturers are looking for: Talent, Innovation, Transportation, and Energy. From what I saw, he is right. The busloads of young people from area high schools and universities entranced with the robotics and autonomous vehicles on display were testimony to the efforts of educators to promote STEM programs in the local schools. Also impressive was the effortless accommodation of downtown Chicago’s transportation system to the 122,000 visitors. Innovation was certainly on display, and we’ll just have to take his word that energy costs in Illinois are among the least expensive in the nation.

One of the big announcements at the show was from Hewlett Packard’s 3D Printing President Stephen Nigro. The company has made a big move into additive manufacturing, with a new Metaljet machine intended for 3D printing for scale production of end-use metal parts. Analysts seem to think the product will eventually have a game-changing impact on the manufacturing world, starting with a big push into manufacture of electric vehicles. Although the machine is not yet for sale, H-P is working with contract manufacturers GKN and Parmatech to offer parts printing services via uploading of CAD files. 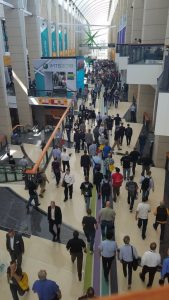 EMSNow met with companies that had products focused on electronics manufacturing. Omron’s Keith Kersten showed me around their demonstrations. Omron Automation creates, sells and services fully integrated automation solutions that include robotics, sensing, motion, logic, safety, and more. Established in 1933 and currently headed by President Yoshihito Yamada. On display in Chicago was a suite of products to address the issue of traceability, something that is getting more attention lately as electronics goes into regulated industries like medical, aerospace and anything connected to the Internet. They also introduced the NX Safety Controller, said to be the first to support both featuring both CIP Safety and Safety over EtherCAT standards. Omron’s MX-Z20xxH series laser marking system can mark very small parts, down to 0.2 mm. I will treasure my new metal business card forever. 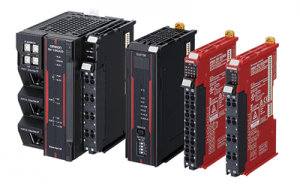 Omron collaborated with Taiwanese TM Robot, who developed a collaborative robot or ‘cobot’ with built-in vision on a demonstration of autonomous industrial vehicles. The high school kids at the booth were fascinated with the vehicle’s technology that could learn routes and deliver parts to different workstations, easily navigating around obstacles using the vision system. 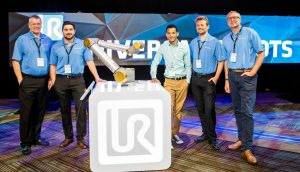 At Universal Robot’s booth, I saw further demonstrations of cobot technology. The company has created the UR+ platform to help developers take the trial and error out of creating a robot application. They are committed to educating users.   I’m considering spending 87 minutes to see how much I can learn. In addition to training, they provide grippers, software, sensors, vision cameras and more to allow customers to ‘hit the ground running,’ they say. Universal Robots announced its 25,000th collaborative robot unit sold at the show with the presentation of a unit with joints in a rich golden finish, to Kay Manufacturing, a local customer. These flexible machines are said to be the fastest growing segment of industrial automation, expected to jump to 34% of all industrial robot sales by 2025, according to the International Federation of Robotics. A number of UR’s units could be seen throughout the show at dozens of other booths. 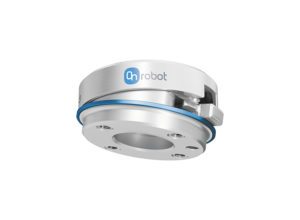 Gripper technology is a key enabler of applications for robotics in manufacturing. ONRobots’ Kristien Hulgard explained to me how his company’s sensors are able to add a sense of touch to the gripper arms, enabling the robot to sense a ‘click’ when a connector was installed properly, for example. Their ‘Gecko’ adhesion material similarly enables more types of components to be automated in the assembly line as it is superior to vacuum grippers since some boards have holes in them.

Mobile Industrial Robots (MiR), a global supplier of autonomous mobile robots (AMRs), announced five new distributors in the US, Mexico and Argentina to help meet the ever-increasing demand for its robots worldwide. MiR, whose North American sales account for nearly a quarter of its worldwide growth, added Allied Automation, based in Indianapolis, Indiana; Empire Automation System in Rochester, N.Y., known as MASEAS; Lydey Automation in Maumee and Brecksville Ohio; I3 Mexico in Monterey Mexico, Murten S.L.R., in Buenos Aires, Argentina, and Macon, in Tierra del Feugo, Argentina. This brings the total number of MiR distributors to 143 in 40 countries.

“Automating internal transport with mobile robots is proving to be a key element for manufacturers to optimize production and increase competitiveness,” said Ed Mullen, general manager – North America, Mobile Industrial Robots. “This is especially true within multinational corporations that have successfully tested our robots within a few facilities and now want to optimize their internal transportation throughout their plants worldwide. By expanding our distribution network throughout the US and Latin America, we can help even more companies reap the benefits.”

Those are a few of the booths I stopped at during my day at the show. Look for more Breaking News from the show in your EMSNow Daily Briefing next week.