Recent research from IDTechEx in their brand new market research report, “Power Electronics for Electric Vehicles 2022-2032”, explores the importance of inverters in achieving ever greater EV range and market differentiation.

However, fundamentally, the power electronics industry is underpinned by a transition towards fancy new semiconductor technology, and even without this, drives demand for semiconductor content per electric vehicle roughly 2.3x that of internal-combustion engined ones. Is electrification sustainable amid a semiconductor shortage? 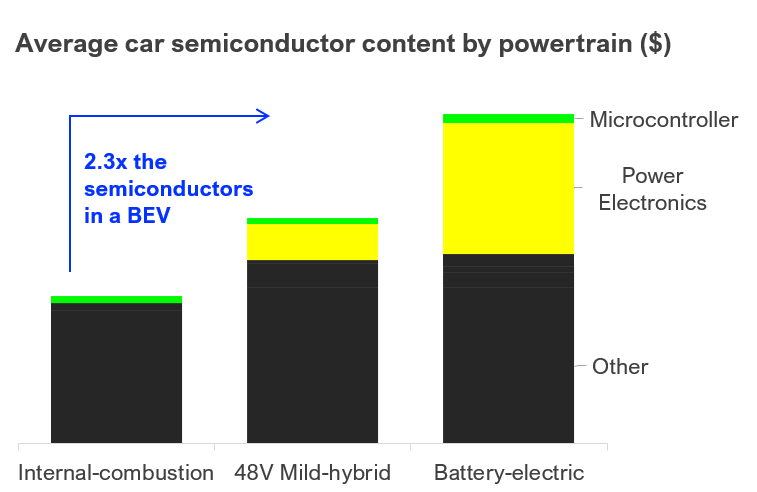 It is difficult to predict the impact of the chip shortages on electric vehicle markets. Unlike the global auto market, electric vehicle sales grew consistently throughout 2020 with ~40% year-on-year growth; the surge is continuing this year with sales on track to reach ~5 million in 2021.

What is remarkable is that electric vehicles require more semiconductor content than internal combustion-engined ones. By 2022, with current trajectories and assuming no supply constraints, we estimate electrification in the automotive sector (BEV, PHEV, FCEV, HEV, 48V) will demand an additional $7.4 billion worth of semiconductor material compared to a scenario without electrification.

However, while electric vehicles are a massive growth sector for the semiconductor industry, growth is driven by power electronics, while current shortages are mainly affecting microcontrollers (MCUs).

Moreover, the continued growth of electric vehicle markets through 2020 means it is less likely automakers canceled EV parts, at least to the same degree as internal combustion cars, and electric vehicles were able to sidestep some of the brunt of the impact.

Tesla claims it has largely managed the crisis in 2021 by building new microcontroller designs and changing microcontroller suppliers – its sales have remained strong. Less established EV start-ups are having a harder time but tend to operate in premium or other low-volume sectors. For example, Nikola has delayed the release of its FCEV vehicles, but this is a loss of under 100 units in 2021.

Electric vehicles markets will be impacted, but IDTechEx do not think they will stop growing. Light is at the end of the tunnel, with Ford saying, ‘we see Q2 [2021] as the trough’. Indeed, IDTechEx thinks gradual improvements will occur through 2022, which largely depends on demand from phone/laptop/home-office tech sectors cooling off rather than long-term capacity expansion plans from foundries.

One fifth of U.K. manufacturing workers do not intend to commute again post pandemic