The massive rise in market demand for notebook computers in response to distance learning needs and WFH applications from 2020 to 2021 has generated not only a double-digit growth in notebook panel shipment, but also a price hike of more than 40% for notebook panels, according to TrendForce’s latest investigations. As various suppliers subsequently scramble to manufacture OLED, LTPS, and oxide panels, TrendForce forecasts these high-end notebook panels to reach a 17.8% market share in 2021 and 21.4% in 2022.

Panels based on OLED technology are primarily supplied by SDC, whose OLED notebook panel shipment for 2020 reached 800,000 pcs. SDC is expected to ship more than four million pcs of OLED notebook panels in 2021, with room for further growth in 2022. In addition to SDC, EDO is also expected to begin mass producing OLED notebook panels in 2H21-1H22. As such, TrendForce expects OLED panels to reach a 1.3% penetration rate in the overall notebook panel market this year. Although BOE and CSOT are currently fully engaged in Hybrid OLED development, Hybrid OLED panels will not enter mass production until 2023 due to technological and cost-related bottlenecks that are yet to be resolved.

The top three suppliers of LTPS panels are, in order, AUO, CSOT, and Tianma. Thanks to such advantages as low power consumption and narrow borders, LTPS panels are widely used in high-end notebook computers. In the overall notebook panel market, LTPS panels are expected to reach a penetration rate of 3.7% this year. With regards to LTPS suppliers, AUO will likely expand its L6K fab’s production capacity of LTPS notebook panels in 2022. Innolux, on the other hand, currently allocates the LTPS production capacity in its Luzhu-based panel fab primarily for smartphone displays. Innolux is expected to mass produce LTPS panels for notebooks some time in 2H21. CSOT and Tianma will likewise gradually increase the share of LTPS notebook panels in their overall panel production in spite of their lack of capacity expansion plans at the moment.

Finally, oxide panels are primarily supplied by LGD, Sharp, and BOE. Much like LTPS panels, oxide panels have the advantage of low power consumption and narrow borders. However, oxide panels are relatively more cost-competitive compared to LTPS panels, as the former require fewer mask layers during the manufacturing process. Hence, oxide panels currently possess the highest market share among all high-end notebook panel types. TrendForce expects oxide panels to reach a 12.8% penetration rate in the notebook panel market this year. With regards to suppliers, IVO and HKC are expanding the production capacities at the Kunshan-based Gen 5 fab and Mianyang-based Gen 8.6 fab, respectively, for oxide panels this year, while CSOT is also planning the same for its new Gen 8.6 fab in Guangzhou. Once these three suppliers finalize their expansion activities, their oxide panel capacities are expected to exceed 70K sheet/m, and these capacities will be gradually available for mass production across 2022-2024. 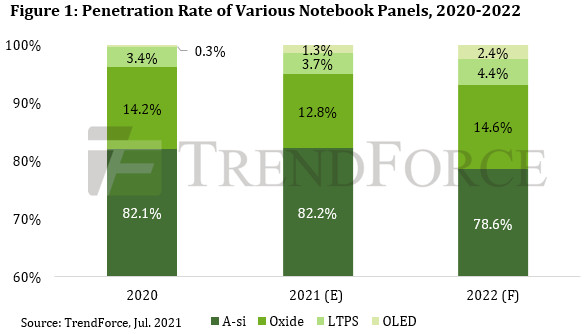 Monitor Shipment Expected to Grow by 5.4% YoY in 2020, While Asus Undergoes Highest % Growth and Samsung Rises in Ranking, Says TrendForce