Global Smartphone Shipments Expected to Decline 6.5% in 2022, Amidst Global Inflation and Softer Demand, According to IDC

NEEDHAM, Mass. – According to the latest International Data Corporation (IDC) Worldwide Quarterly Mobile Phone Tracker forecast, shipments of smartphones will decline 6.5% to 1.27 billion units in 2022. The decline is due to record-breaking inflation, geopolitical tensions, and other macroeconomic challenges that have significantly dampened consumer demand. As a result, the latest forecast figures represent a reduction of three percentage points from previous projections. However, IDC expects the setback to be short term and the market to rebound in 2023 with 5.2% growth year over year and, in the long term, a five-year compound annual growth rate (CAGR) of 1.4%.

“The supply constraints pulling down on the market since last year have eased and the industry has shifted to a demand-constrained market. High inventory in channels and low demand with no signs of immediate recovery has OEMs panicking and cutting their orders drastically for 2022. The events of the last twelve months have shaved 150 million units off the market for 2022 from our forecast in the second quarter of 2021,” said Nabila Popal, research director with IDC’s Worldwide Mobility and Consumer Device Trackers. “Despite the unit decline, average selling prices (ASPs) have grown 10% year over year in Q2 and are forecast to grow 6.3% for the full year. The premium segment ($800+) has proved resilient to the economic turmoil and has grown four percentage points in share to 16% of the total smartphone market and will continue to grow. This includes foldable devices, which is the fastest growing segment today and expected to increase 70% year over year in 2022 to reach 13.5 million units shipped.”

From a regional view, the economic crisis has hit emerging markets, where a majority of the shipment volume comes from sub-$400 devices, significantly harder. Central and Eastern Europe (CEE) is expected to be down 17.4% in 2022 and Asia/Pacific (excluding Japan and China) (APeJC), previously forecast to grow 3.0%, is now expected to drop 4.5% in 2022. However, the most significant volume drop is coming from China, which is now forecast to decline by 12.5% or roughly 41 million units, contributing almost half of the overall reduction this year. In contrast, developed markets like North America (USA and Canada) and Western Europe are forecast to do much better in 2022. The U.S. will be relatively flat at 0.3% growth year over year while the Canadian market will fare slightly better with 3.2% growth and only a slight 0.7% decline for Western Europe.

“The resilience of the market’s upper echelon has been a testament to the success of iOS, which has not witnessed a full-year shipment decline since 2019,” said Anthony Scarsella, research director with IDC’s Worldwide Mobility and Consumer Device Trackers. “Despite the overall market decline, iOS shipments will remain positive in 2022 with 0.5% growth. Additionally, the operating system will display minimal growth throughout the forecast period with ASPs hovering well above $950. As for the world’s most popular operating system, Android, 2022 will bring a near 8% decline but will rebound nicely in 2023 with 6.2% growth. Unfortunately, the low-end of the market has not fared well in 2022, as shipments of Android-based devices under $200 declined 22.4% in Q1 and 16.5% in Q2. On a positive note, devices above $1000 have displayed 35.2% growth, thanks to premium flagships and the recent success of foldable devices in the market.” 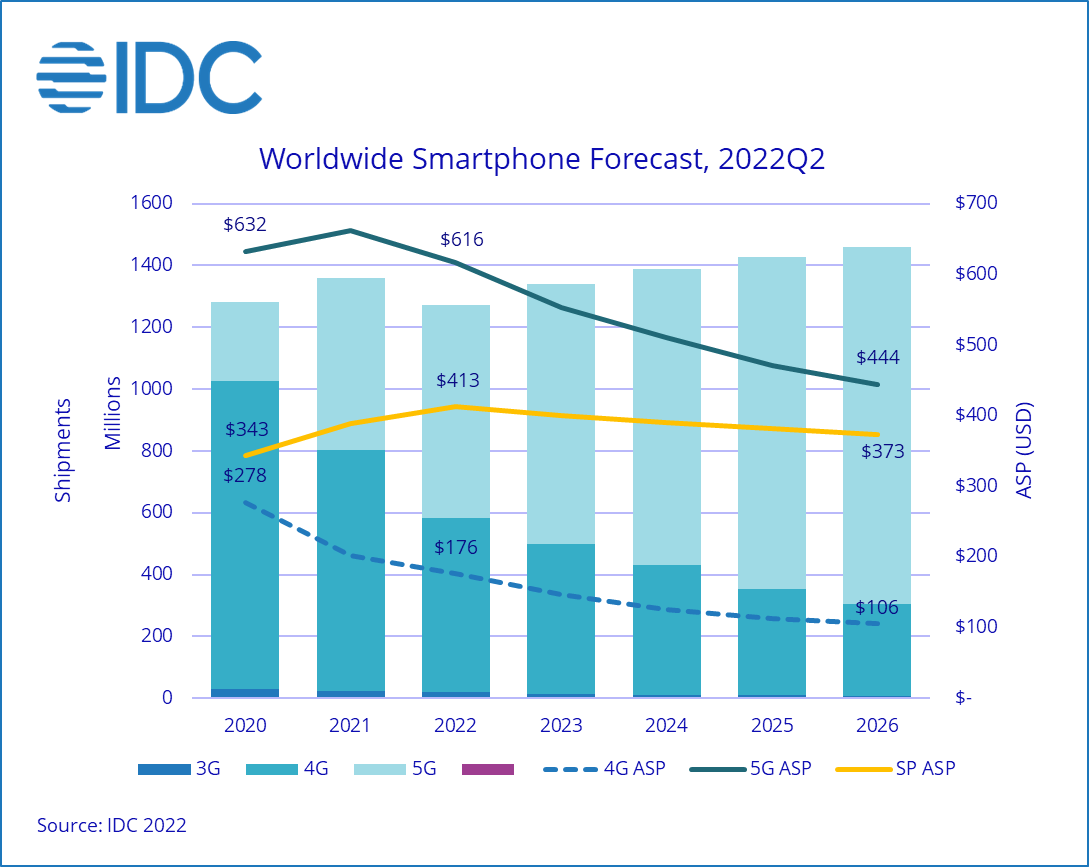 The Growth in Connected IoT Devices Is Expected to Generate 79.4ZB of Data in 2025, According to a New IDC Forecast

Smartphone Shipments Expected to Further Decline in 2018 Before Returning to Growth in 2019, According to IDC