Dubai – Newly released data from IDC’s Worldwide Quarterly Mobile Phone Tracker shows that shipments of mobile phones to the Gulf Cooperation Council (GCC) region declined 0.8% quarter on quarter (QoQ) in Q1 2022 to total 6.10 million units. Smartphone shipments were up 0.4% QoQ to 5.47 million units, while feature phone shipments decline 9.8% over the same period to 0.63 million units. In terms of value, the GCC smartphone market was worth $2.09 billion in Q4 2021, a decrease of 4.5% QoQ, while the feature phone market totaled $11.16 million, down 25.9%.

Samsung and Xiaomi channels reported improved supply across the GCC for the quarter. Samsung saw its most significant growth in the low ($100<$200) and premium ($800+) ends of the market, while Xiaomi saw growth in the midrange to high-end category ($200<$600). Apple faced shortages stemming from delayed shipments, which impeded the vendor’s overall unit and value growth during the quarter.

“Q1 2022 saw a drop in shipments to Saudi Arabia with partners reporting excess inventory in the channel and lagging demand,” says Akash Balachandran, a senior analyst at IDC. “However, the ‘Other GCC’ countries (Bahrain, Kuwait, Oman, and Qatar) saw a mild pickup after having experienced constrained supply in previous quarters. The UAE’s smartphone growth stemmed mainly from an improved supply of low-end and premium Samsung devices, as well as from Xiaomi’s concerted focus on promoting its midrange devices.”

Samsung led the GCC smartphone market in terms of shipments in Q1 2022 with 47.5% share. The vendor posted 6.9% QoQ growth in shipments as supply improved, especially for its S-series devices. Second-placed Apple, with 15.4% share, saw shipments decline 18.2% QoQ, with channel partners reporting supply constraints and delays in shipments. Rounding out the top three, Xiaomi accounted for 14.9% of the GCC smartphone market in Q1 2022, with its expanding portfolio of midrange to high-end devices driving a 9.3% QoQ increase in shipments to the region. 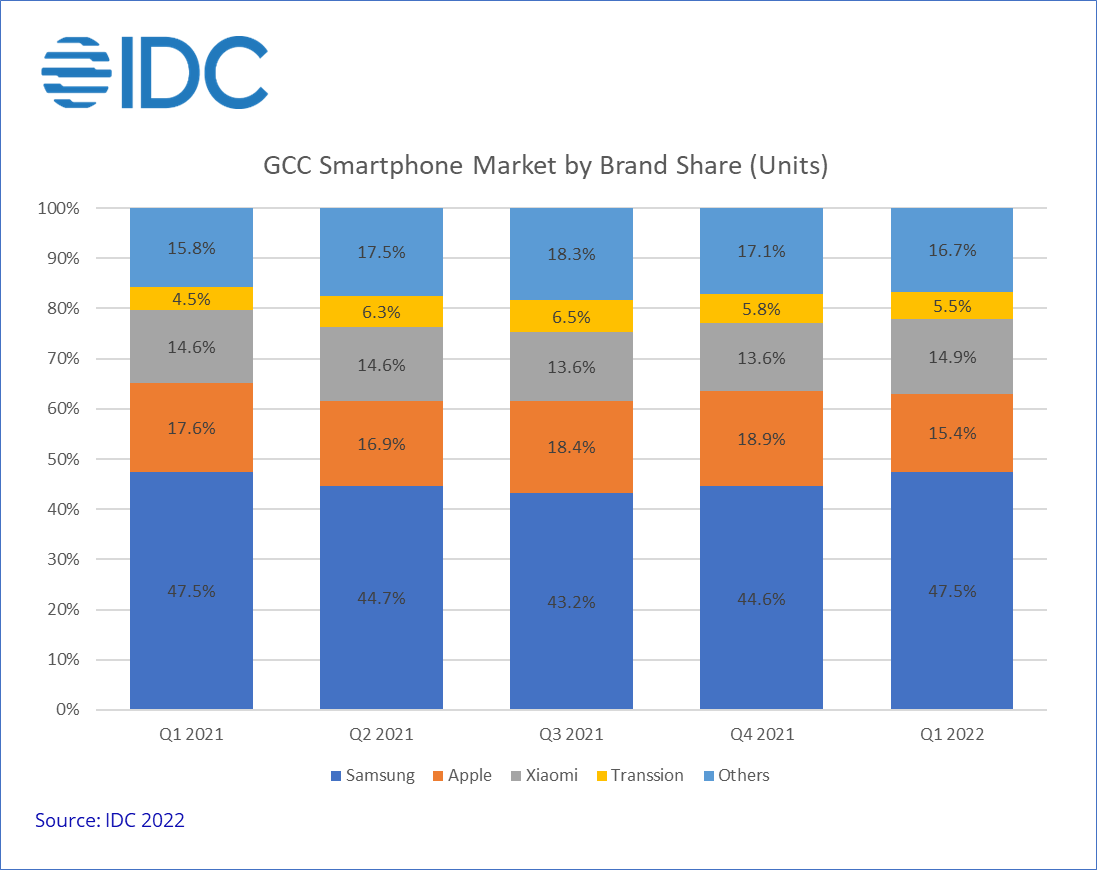 The GCC smartphone market is forecast to decline 4.8% QoQ in Q2 2022 due to rising inflation, declining consumer demand, and growing inventory in the channel. Travel and tourism will continue to increase but will not be sufficient to improve the quarter.

“5G shipments to the GCC in Q1 2022 were down 3.4% QoQ and accounted for 35.9% of overall smartphone shipments,” says Ramazan Yavuz, a senior research manager at IDC. “This was due to higher shipments of entry-level 4G Android devices in conjunction with shortages of iOS 5G devices. While ups and downs are expected in the short term, 5G penetration is forecast to continue at its previous rapid pace over the medium and long term and will make up 80.6% of total GCC smartphone shipments in 2026.”

Our average number of connected devices is at an all-time high, says GlobalData

New megatrends will transform the human experience and reshape markets, societies and the global order