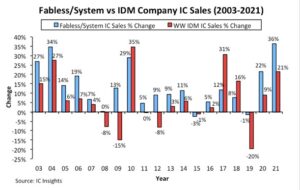 It is interesting to note that if Intel was excluded from the IDM listing in 2020 and 2021, total IDM supplier IC sales would have been up by 29% last year, eight points better than when the company is included.  Moreover, if HiSilicon (which saw its sales plummet 81% last year) was excluded from the fabless company figures in 2020 and 2021, total fabless company IC sales growth last year would have been an amazing 44%! 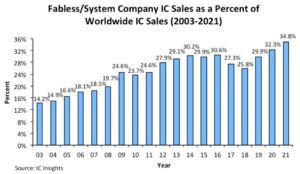 With a 36% surge in fabless company IC revenue in 2021, the fabless companies’ share of worldwide IC sales set a new all-time record high in 2021 at 34.8%.  Over the long-term, IC Insights believes that fabless/system IC suppliers, and the IC foundries that serve them, will continue to be a strong force in the total IC industry landscape with their percentage share of the total IC market expected to reach the high-30s over the next five years.