Driven by such factors as the continued development of autonomous driving technologies and the build-out of 5G infrastructure, the demand for automotive memories will undergo a rapid growth going forward, according to TrendForce’s latest investigations. Take Tesla, which is the automotive industry leader in the application of autonomous vehicle technologies, as an example. Tesla has adopted GDDR5 DRAM products from the Model S and X onward because it has also adopted Nvidia’s solutions for CPU and GPU. The GDDR5 series had the highest bandwidth at the time to complement these processors. The DRAM content has therefore reached at least 8GB for vehicles across all model series under Tesla. The Model 3 is further equipped with 14GB of DRAM, and the next-generation of Tesla vehicles will have 20GB. If content per box is used as a reference for comparison, then Tesla far surpasses manufacturers of PCs and smartphones in DRAM consumption. TrendForce forecasts that the average DRAM content of cars will continue to grow in the next three years, with a CAGR of more than 30% for the period.

Based on the existing vehicle models circulating in the global car market, TrendForce estimates that the average DRAM content of cars will reach around 4GB in 2021. The growth in the average DRAM content of cars is expected to be much higher this year than in the past few years. However, car sales are not as great in scale when compared with sales of consumer electronics such as notebook (laptop) computers and smartphones. In 2019 before the COVID-19 pandemic, the annual global car sales totaled around 94 million vehicle units. Also, cars have less DRAM content compared with servers. Looking at the 2019 data, the distribution of the annual global DRAM consumption shows that the automotive memory segment accounted for less than 2% of the total.

Despite high barrier to entry, memory suppliers have been scrambling for automotive market share due to high profit margins

Compared with other application segments, automotive memory has a much higher standard for durability and reliability over the long term. The operating lifecycle of a car starts at 10 years, so DRAM suppliers basically have to guarantee that their automotive memory solutions have a product lifecycle of at least 7-10 years in order to satisfy the needs related to vehicle maintenance and replacements of parts. From the perspective of suppliers, the selection of process technology for product development and manufacturing is a key decision point when it comes to formulating a strategy for the automotive memory segment. Even as suppliers continuously migrate to the more advanced process technology, they have to ensure product longevity and long-term support for their automotive offerings.

Currently, Micron is the leader in automotive memory products with a market share of nearly 50%. The supplier first has the geographical advantage. Moreover, its collaborative relationships with tier-1 automotive suppliers based in Europe and the U.S. are longer in duration compared with its competitors. Micron also has a more comprehensive product lineup for automotive applications, ranging from traditional solutions (e.g., DDR2 to DDR4) to LPDDR solutions (e.g., LPDDR2 to LPDDR5) to GDDR6 solutions. Additionally, Micron provides automakers with other types of memory technologies such as NAND Flash, NOR Flash, and MCP.

Apart from the three dominant DRAM manufacturers, Taiwan-based Nanya Tech and Winbond are continuing to release a wide variety of memory products in response to the growing demand of the automotive industry. In addition to possessing a comprehensive product mix ranging from traditional DDR solutions (e.g., up to DDR4) to low-power solutions (e.g., LPSDR to LPDDR4X), Nanya Tech has also adopted the 20nm node for a significant portion of its manufacturing processes, which are relatively stable in terms of yield rate. On the whole, automotive applications account for nearly 15% of Nanya Tech’s specialty DRAM revenue, while specialty DRAMs account for more than 60% of the company’s total revenue.

Winbond, on the other hand, has been cultivating its presence in the automotive market for more than 10 years. Although the three dominant DRAM manufacturers are ahead of Winbond in terms of process technologies, Winbond’s extensive product portfolio, which includes specialty DRAM, mobile DRAM, NOR Flash, SLC NAND, and MCP, represents a competitive advantage over the vast majority of other manufacturers. Given that the automotive OEM market is both relatively stable and profitable, Winbond has been placing a long-term focus on this market; automotive applications now comprise more than 10% of the company’s total memory revenue, and Winbond’s automotive business will likely continue to expand going forward. 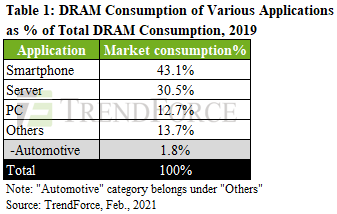