Constrained by carbon neutrality and carbon peaking targets and enveloped by a bullish backdrop of declining system costs, the global installed capacity of wind and solar energy has shown a steady growth trend over the past five years. According to TrendForce statistics, the cumulative installed capacity of global renewable energy in 2021 was approximately 3,064GW (gigawatts), with an average annual growth rate of approximately 8-10% and 88% as the highest application of wind and solar energy in any area.

Judging from the current growth rate of the energy storage market in various countries, China is soon to overtake Europe and the United States with primary growth momentum coming from the generation side. TrendForce believes that China’s new energy storage will move towards being large-scale and market-oriented, forming an energy storage structure that is generation based, policy-driven, storage mandatory, and supplemented by the grid side (Transmission & Distribution) and consumer side (End User; including household, industrial, and commercial use). China’s energy storage market is expected to break through 100GWh by 2025.

In the United States, due to the current stagnation in newly installed pumped hydro storage capacity, future growth will focus on electrochemical energy storage. Newly installed capacity in the United States is predicted to reach 136GWh in 2025. In Europe, thanks to policies and economic promotion, demand for energy storage installations has surged. Due to the Russian-Ukrainian war, the supply of natural gas and other energy sources in Europe has tightened and the cost of electricity has continued to rise, causing market panic. The EU has now set a new energy installation target for 2030 which will stimulate demand for energy storage and newly installed capacity is predicted to reach 54GWh in 2025. 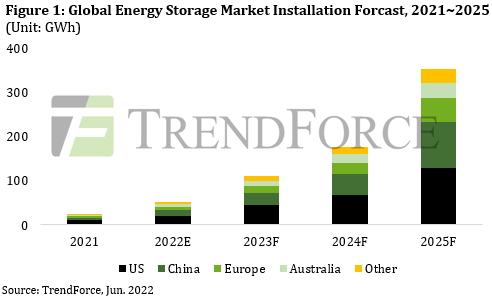 Most energy storage PCS originate from solar inverter manufacturers and PCS are expected to maintain the competitive landscape of solar inverters in the future. Competition among leading companies such as Sungrow and SMA will intensify and concentration will increase further. System integration will present a relatively fragmented competition pattern with small and medium-sized companies in the majority and some leading upstream companies such as Sungrow and NextEra Energy in the mix.

Tech Trends that Won’t Happen in 2023, according to ABI Research