Economic growth in Mexico to remain slow for rest of the year, says Deloitte Insights

ANDRES Manuel López Obrador (popularly known as AMLO), the first left-wing president to rule Mexico in the modern democratic era, in December 2018 took charge of an economy that was predicted to grow a modest 2.5 percent in 2019. However, a series of policy decisions—the cancellation of infrastructure projects (the most important one being the international airport in Mexico City), the suspension of energy contract auctions for three years, and an unprecedented cut in public expenditure—resulted in lower investment and diminished business confidence. These policy decisions, along with uncertainty surrounding international trade and the world economy, have driven down the country’s growth forecast to 1.4 percent. However, Mexico has strong macroeconomic fundamentals and we expect growth to continue to be powered by consumer expenditure, albeit at a slower pace.

One of AMLO’s first decisions, made even before he assumed the presidential office, was the cancellation of the previous administration’s marquee infrastructure project—the New International Airport for Mexico City (NAIM)—alleging corruption in the contracts assigned for its construction.1 The move sent shockwaves across the markets, resulting in the Mexican peso losing 1.7 percent of its value in just one week (figure 1). While the effect was not long lasting, and the Mexican peso has climbed back to an exchange rate of MXN$19 to the US dollar since then, the impact on business confidence was enduring. The NAIM project, valued at US$10.1 billion (of which US$3.3 billion had already been executed), was a necessary upgrade to the overstrained airport infrastructure, which was hampering the country’s competitiveness. The NAIM was poised to be the third-largest airport in the world.2 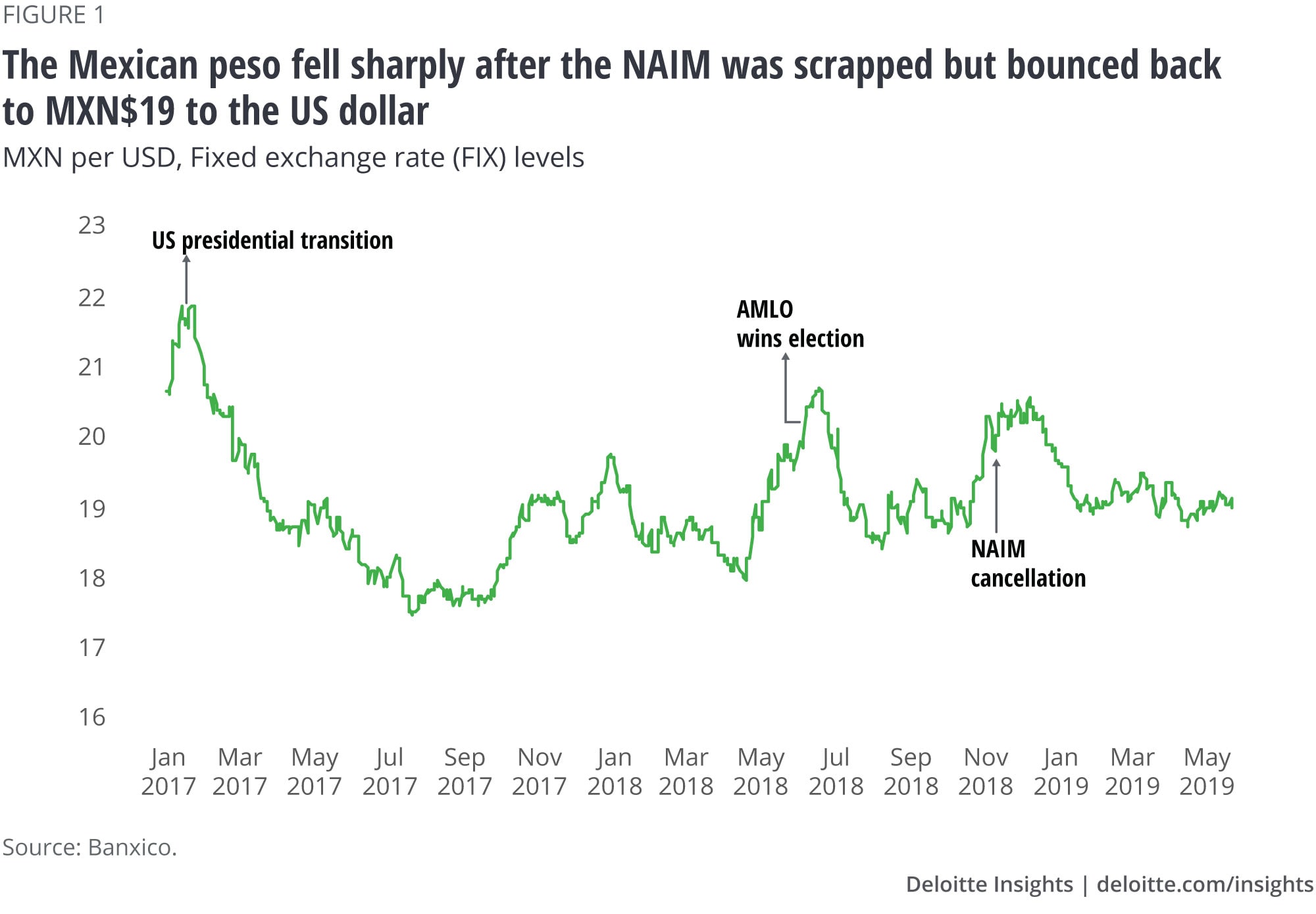 The decision to scrap the airport project was not the only factor behind the loss of business confidence. After circulating several versions of the project to replace the NAIM, the government finally announced that an airbase would be the location of the new airport, despite multiple shortcomings in this plan. As a result, the business confidence index dropped below 50 points for the first time since May 2017, indicating contraction of the variable.

The new administration also halted oil contract auctions for all activities, including exploration and drilling, for a period of three years, at an estimated annual cost of US$1 billion in lost investments .3 The suspension of these auctions may result in Mexico’s oil output touching about 2.7 million barrels per day within a decade, up more than 1 million barrels a day from current levels. However, this figure is about 300,000 barrels lower than what the daily output could have been if auctions were held as originally planned.4 Delaying the entry of foreign capital at a time when Mexican state-owned oil and gas company Pemex is facing serious financial problems, along with a declining output, will put additional pressure on the public finances of the government.5

Another program that was cancelled as part of the new policy priorities of AMLO’s government is special economic zones (SEZ).6 This initiative was launched in 2016 to foster economic growth in marginalized areas of the country by attracting foreign direct investment (FDI) via tax incentives, trade facilities, duty-free customs benefits, infrastructure development, and, deregulation.7 Scrapping this program will result in an estimated loss of US$8.2 billion in infrastructure projects while the long-term impact of this decision will likely result in a loss of more than US$42 billion in investments.8

The revocation of public infrastructure projects and the uncertainty surrounding economic policies contributed in part to the decline in fixed investment, which registered a 6.3 percent year-over-year contraction in December 2018—the biggest decline since September 2013 (figure 2). Alongside this, the gross fixed investment (GFI) collapsed at a 12.5% sequential annualized rate in Q4 2018, the worst quarterly performance since the 2008–2009 crisis. 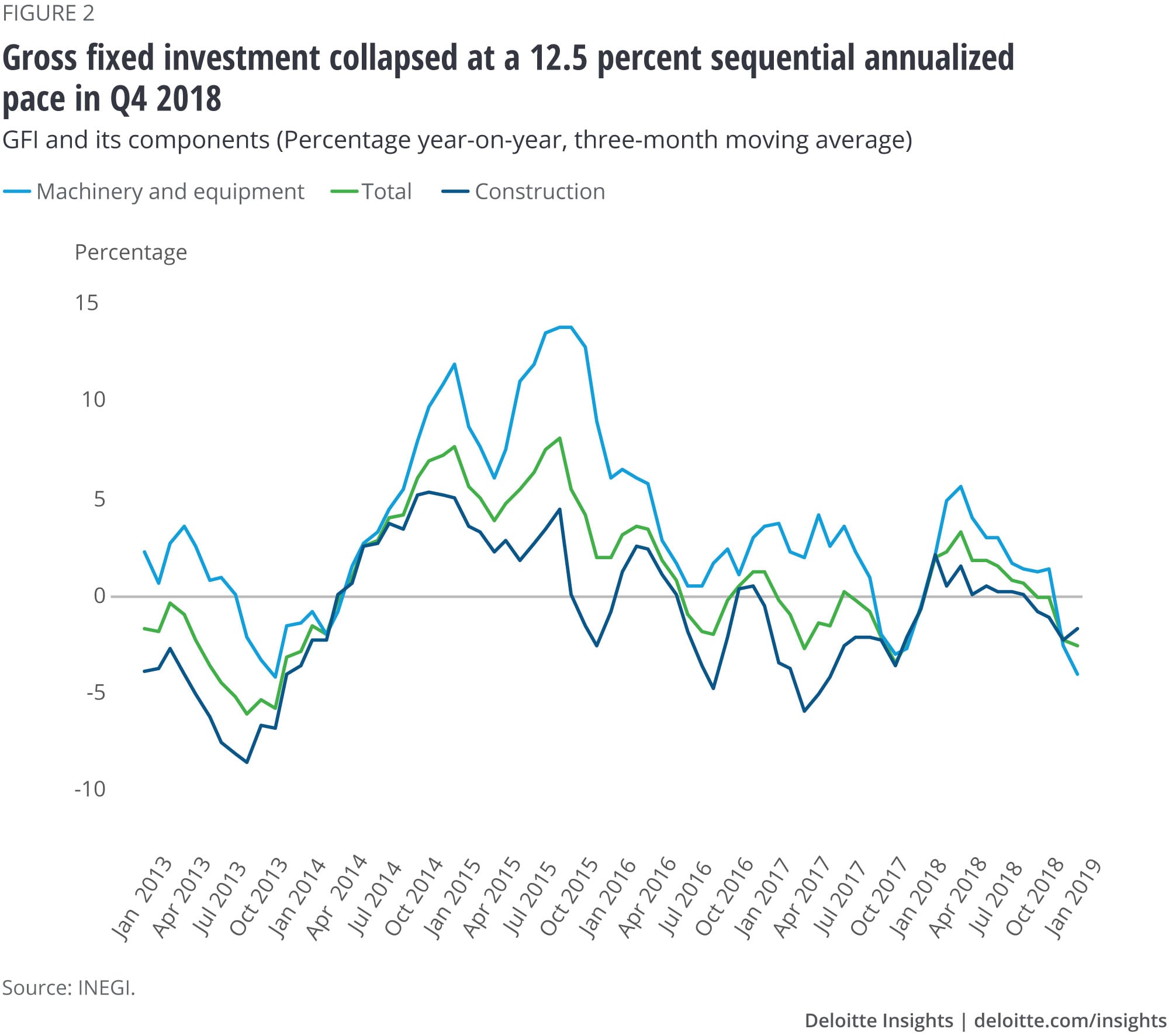 Consumption is strong, but austerity policies will decelerate economic growth

One of the central tenets of AMLO’s campaign was the expansion of the welfare state to address problems such as corruption and inequality. Accordingly, Mexico’s social development expenditure increased by 20.4 percent year over year in the first quarter of 2019.9 The implementation of these programs has been a popular policy that in part explains AMLO’s high approval rate.10 In the last survey, the presidential approval rate ranged between 60 percent and 85 percent.11 As shown in figure 3, people’s high expectations from AMLO led the consumer sentiment index to reach an all-time high of 42.1 percent year over year in February. 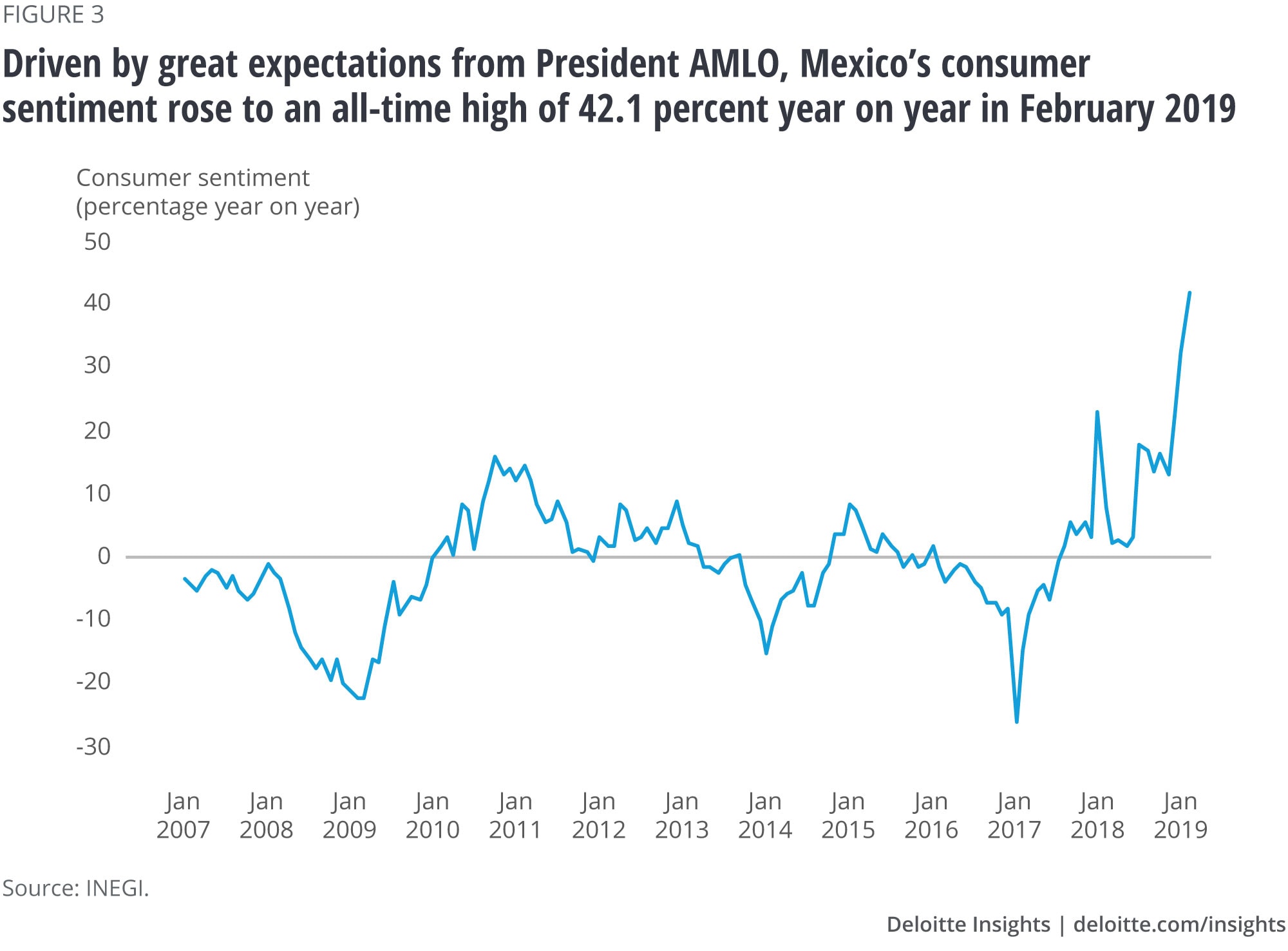 In particular, there are three factors that have led to AMLO’s popularity. First, the recent hike in the minimum wage, which was increased by 16 percent nationally and 100 percent in border towns. This was reflected in a strong increase of 2.9 percent year over year in real wages during the first two months of the year, a level not seen since 2001. Second, the Jóvenes Construyendo el Futuro program, which provides MXN$3,600 (US$189) per month to young people who are trained at job sites. Third, the pension given to older people, which is set to increase to MXN$2,550 (US$133) from MXN$1,160 (US$61) every two months. These payments are more than twice the amount received in the previous administration.

Nevertheless, to finance social programs and to maintain the government’s fiscal targets, the new administration has adopted cost-cutting measures across the board. In the first three months of 2019, total government expenditure decreased 6.1 real percent as compared to the corresponding period in 2018. This includes reduction in the levels of current spending, capital spending, and public physical investment (5 percent, 4.8 percent, and 13 percent, respectively). These measures were accompanied by the retrenchment of 11,820 public servants and the approval of a new law that substantially reduced the wages of the bureaucracy.12

Despite the substantial decrease in public expenditure, fiscal savings may not have the desired impact on public finances, as they have been used to fund Pemex. In the first quarter of 2019, 53 percent of the total physical investment by the federal government was exclusively directed toward energy projects, up from 38 percent in the previous year. This has raised concerns that the government is granting resources to a sector that will not necessarily contribute to the country’s growth. Furthermore, the government considerably reduced spending in other sectors that are crucial for competitiveness. For example, the transport and communication sector faced a 78 percent year-over-year decline in the first quarter of 2019.

While financial support to Pemex may be necessary for its fiscal health, other long-term measures that can boost production and productivity are also needed. Otherwise, the possibility of another cut in the oil company’s debt rating—which can be extended to the sovereign note—becomes increasingly high. In January, Pemex’s debt rating was downgraded two levels by Fitch, from BBB+ to BBB-, while S&P reduced its perspective.13

Whirlpool to invest US $120 million in Coahuila plant

ALL Circuits and IEE Announce Grand Opening of Their Newest Facility in Guadalajara, Mexico

MADE IN MEXICO 2021, episode 2 – Team Koh Young on a Strong Recovery