Atlanta – ECIA has posted the April Industry Sentiment Report penned by ECIA Chief Analyst Dale Ford stating the electronics component market sales sustained strong growth in April. The article is based on data from the ECIA’s Electronic Component Sales Trend (ECST) monthly survey. The survey which assesses month-to-month sales growth ranged between 146 and 159 in component and end-market measures from March to April as shown in the accompanying figure.

“Looking forward, the data shows May softening modestly compared to April,” explained Ford. “However, it should be remembered that any score above 100 indicates growth expectations.  Hence this softening is an indication of a decrease in the rate of market acceleration and not an indication of weakening growth. Given the continued strong pressure on growth it should be expected that demands on supply will continue to result in increased lead times and upward price pressure,” he concluded. 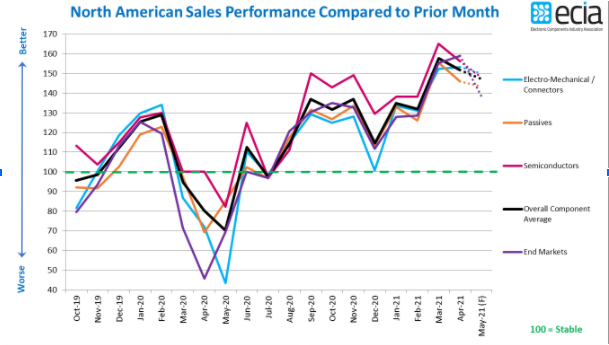 The April Industry Sentiment report can be found at www.ecianow.org/stats-insights. Members who participate in the survey gain access to all the survey results.