A vigorous DRAM market upturn that started in the last half of 2020 and continued through May 2022 is, by all accounts, over, according to data released in IC Insights’ August 3Q Update to The McClean Report 2022. After posting its highest monthly sales volume in more than two years in May, DRAM sales tumbled 36% in June and another 21% in July.  The market collapse was steep and swift—so much so that July’s DRAM market was about half the size it was in May (Figure 1).  Concern over soaring inflation and recession has cut into consumer spending on new smartphones, computers, TVs, and other electronic goods. In turn, system manufacturers have scaled back new DRAM orders, citing the need to burn through existing inventory that they have amassed. 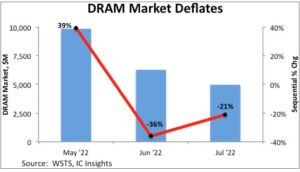 The sharp decline in DRAM sales seen in June and July might have been dismissed as a short-term anomaly had it not been for comments from DRAM suppliers about the developing market.  For example,

•    Micron guided fiscal 4Q sales results (ending August) of -21%.  Micron is scheduled to report its fourth quarter and full-year sales results on September 29, 2022.  Their results will likely set the tone for the rest of the industry for the balance of this year.

•    Kyung Kye-hyun, Samsung’s co-CEO and head of its semiconductor unit said, “The second half of this year looks bad, and as of now, next year doesn’t really seem to show a clear momentum for much improvement.

Industry veterans know that when the DRAM market starts on a cyclical downturn, it usually falls hard and fast. Figure 2 shows several DRAM market collapses since the year 2000.  Each downturn spanned at least 5 quarters and in each case, resulted in the DRAM market falling by at least 41%.  Given the current outlook, IC Insights estimates the DRAM market will be 38% smaller in 3Q22 than when it last peaked in 3Q21. Moreover, IC Insights also anticipates more downside for the DRAM market through 4Q22 and into early next year.