For most of the last two decades strong growth in CMOS image sensors pushed this product category to the top of the optoelectronics market, in terms of sales volume, generating over 40% of total opto-semiconductor annual revenues.  In 2022, however, the CMOS image sensor market category is on track to suffer its first decline in 13 years with sales expected to fall 7% to $18.6 billion and unit shipments projected to drop 11% to 6.1 billion worldwide, according to IC Insights’ August 3Q Update of The McClean Report service (Figure 1).

The projected 2022 decline in CMOS image sensors comes after two years of meager sales growth in 2020 (+4%) and 2021 (+5%).  This year’s sales drop reflects overall weakness in consumer smartphones and portable computers with digital cameras for video conferencing following an upsurge in demand for Internet connections and online conferencing capabilities during the Covid-19 virus pandemic.  The 3Q Update forecast shows a modest recovery in CMOS image sensors next year with market revenues growing 4% to $19.3 billion and then rising 13% in 2024 to reach a new record high of $21.7 billion. 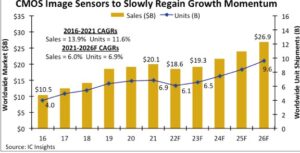 In addition to weak demand in mainstream consumer camera cellphones and portable computers, CMOS image sensors have been negatively impacted by deteriorating global economic conditions resulting from high inflation and spiking energy costs caused by the Russian war in Ukraine as well as U.S. trade bans on China, recent Covid-19 virus lockdowns in Chinese manufacturing centers, and slowing growth in the number of cameras being packed inside of new smartphones.  Some high-end smartphone models contain five or more cameras, but the average in most handsets has stayed at three (one on the front, facing the user for “selfie” photos and two main cameras on the backside of phones).  IC Insights’ 3Q Update Report says some managers in China have described the image sensor market conditions as a “perfect storm,” combining a slowdown in mainstream mid-range smartphone shipments and an unanticipated pause in the increase of embedded cameras being designed in new handsets.

CMOS image sensor market leader Sony—which accounted for about 43% of CMOS image sensor sales worldwide in 2021—reported a 12.4% sequential decline in image sensor dollar-volume revenues (-2% in Japanese yen) during the company’s fiscal 1Q23 quarter, ended in June 2022.  In the first half of calendar 2022, Sony struggled to match image-resolution requirements for camera phones and its CMOS image sensor sales to leading Chinese system manufacturers were lowered by U.S. trade bans.  Sony still believes excess inventories of phones and image sensors will be reduced by early 2023 and market conditions will “normalize” in the second half of its current fiscal year (ending next March).

Nearly two-thirds of CMOS image sensors are used in cellphones, and that share is expected to fall to about 45% by 2026, according to The McClean Report’s 3Q Update.  A slow–but-steady recovery in CMOS image sensors is forecast to be driven by a new upgrade buying cycle of smartphones and more embedded cameras being added in other systems, especially for automotive automation capabilities, medical applications, and intelligent security networks.  The 3Q Update shows CMOS image sensor sales rising by a CAGR of 6.0% between 2021 and 2026 to reach $26.9 billion in the final year of the forecast. CMOS image sensor shipments are forecast to grow by a CAGR of 6.9% between 2021 and 2026, reaching 9.6 million units.